Electronic Arts (NASDAQ:EA) have delivered their results for the quarter ending June 30, 2020, and it seems like the company is continuing to weather the COVID-19 pandemic well. More than well, really. Net revenue for Q1 2021 was above expectations at $1.46 billion, up from $1.21 billion for the same quarter last year, and net income was $365 million. Earnings per share are $1.25, above the $1.09 per share financial analysts were predicting. EA’s stock is up around 2 percent in after-hours trading following the positive earnings report. 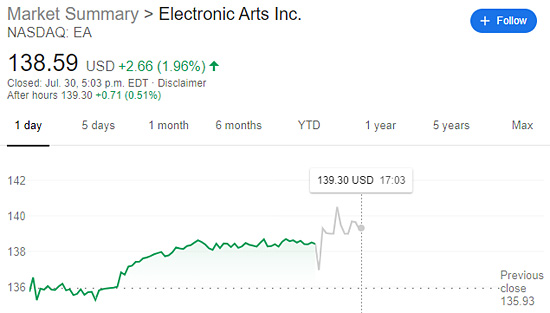 As we learned during the last round of industry earning reports, the COVID-19 pandemic which has thrown much of the world into disarray has actually been of major benefit video game publishers. EA did not put out a lot of notable content during Q1, with Command & Conquer Remastered Collection and a Nintendo Switch version of Burnout Paradise Remastered being their only new releases. That said, the company’s various live-service titles performed exceptionally well with their target audiences trapped at home.

Apex Legends Season 5 drove the game’s highest engagement since Season 1, and player acquisition for the FIFA and Madden NFL franchises were up 100 percent and 140 percent respectively during Q1. EA made sure to keep the live service machine running smoothly, releasing over 30 traditional game updates and 50 mobile updates during the quarter. Clearly EA knew there’d be hunger for more content from familiar franchises during these trying times, and did a good job of satisfying that hunger. 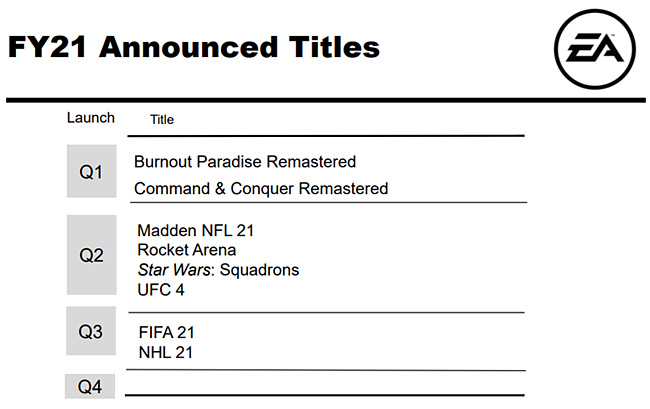 Going forward, EA should continue to benefit from prevailing circumstances, particularly if another full-on COVID-19 second wave and lockdown happens as predicted. As such, EA has raised their FY2021 guidance from $5.55 in net revenue to $5.63 billion. Guidance for net bookings, which includes net revenue plus deferred earnings from in-game purchases, have been boosted even further -- from $5.55 billion to $5.95 billion. Meanwhile, EA is expecting $1.23 billion in net revenue in Q2. EA can deliver a strong year by simply continuing to lean on FIFA, Madden, Apex Legends, and The Sims, which is good, because otherwise, their release calendar is a bit weak.

Madden NFL 21 and EA Sports UFC 4 will do well of course, but the recently-released hero shooter Rocket Arena is a bonafide flop, and it’s hard to predict how Star Wars: Squadrons will do. There is a lot of hardcore fan support for Squadrons, but there’s a chance the space-combat game is a bit too niche for its own good. Q3 will see the launch of FIFA 21 and NHL 21, and Q4 currently has no releases scheduled. But again, aside from the annual sports releases, does EA even need to put any new stuff out? Electronic Arts CEO Andrew Wilson certainly seems confident about the publisher’s plans for the rest of the year…

This was an extraordinary quarter, and we’re deeply proud of everything our teams at Electronic Arts are doing for our players and communities. We launched new games, deeply engaged players in our live services, and welcomed tens of millions of new players to our network. It was an unprecedented first quarter of growth in our business, and we will continue building on that strength with more innovative experiences, more groundbreaking content, and more ways to connect with friends and play great games throughout the year.

It’s hard to argue with Wilson’s sentiments – reliability has always been Electronic Arts’ strategy, and reliability is exactly what people are looking for in these uncertain times. That said, hopefully EA doesn’t rest on their laurels, and continues to produce new tech and IPs from their position of security. We’re entering a new generation of gaming and, thus far, EA hasn’t really spelled out how they're going to take advantage of it. EA is rock solid now, but they don’t want to get so comfortable they’re left behind.