Microsoft is surely not in for video game content only this year at E3. While the publisher’s E3 2015 press conference is filled with exciting game announcements and gameplay trailers, the event also focuses on things that fans have been longing for ever since the Xbox One came out. Taking the audience by surprise, Microsoft just announced backwards compatibility for Xbox One. This means that players will now be able to enjoy last-gen Xbox 360 games on their eighth generation Xbox One with latest console features. 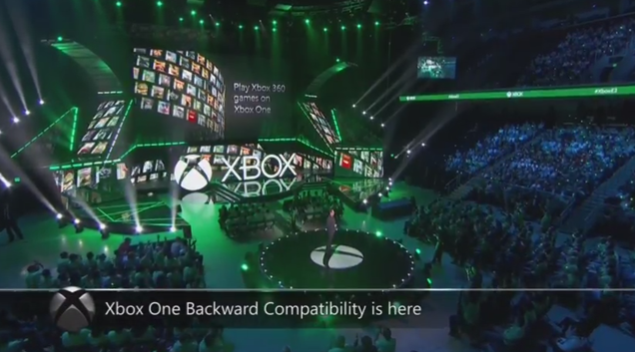 Microsoft just dropped its first megaton today at its E3 2015 press conference. Listening to the cry of its fans, the platform holder has made Xbox One backwards compatibility a reality. Starting this year, the eighth generation Xbox One console will support a limited number of last-gen Xbox 360 games, and players will be able to enjoy all these games with full Xbox Live features, and other Xbox One exclusive features such as Game DVR, Screenshots, and Windows 10 streaming.

Players will have two ways of playing old games that are included in the list of games that are currently available for backwards compatibility with Xbox One. If they had already purchased the compatible game digitally through Xbox Live, they will be able to simply re-download the game without paying any additional charges by logging in on Xbox One. Players will also be able to play backwards-compatible game by simply inserting the Xbox 360 disc and downloading the game to their Xbox One hard drive. Disc will be needed to launch the game then.

No technical details on how Xbox One backwards compatibility will work and what will be its standards were revealed. Microsoft's latest console differs a lot than Xbox 360 in terms of hardware, and so it wouldn’t have been easy to make it run last-gen games with nothing much unaltered. Microsoft also didn’t talk about the frame rate and resolution that the old games will run on; whether there will be any differences or not. The official list of the first wave of games that will be playable via Xbox One backwards compatibility feature has not been revealed yet, but we expect it to come out soon. Microsoft has promised over 100 backwards compatible titles for now, and hundreds more will be made available in future.

Get ready to play your #Xbox360 games on #XboxOne. #XboxE3 pic.twitter.com/emuzzpbOMa