Sony is doing some good business right now at its E3 2014 booth and from what we have seen until now, it looks like the future of PlayStation 4 is bright, very bright. Bringing its very well-known and classic video game series to the PlayStation 4 console, Sony has just announced that the upcoming installment in Naughty Dog's Uncharted series will be called Uncharted 4: A Thief's End. Release date of the game has not been shared, but it is apparently pretty clear that it will be a PlayStation 4 exclusive title only. Also, it has been confirmed that the game will be 1080p/60FPS on Sony's next-gen console. 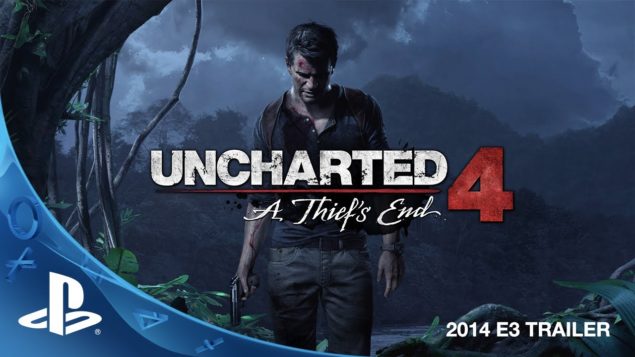 Known as a crown jewel in Sony's first-party ecosystem, Uncharted is an action-adventure third-person shooter video game series that first made its debut on the PlayStation 3 console by the name of Uncharted: Drake's Fortune, which was then followed by two more titles. Saying Uncharted is developed by Naughty Dog is enough to clear your thoughts about how awesome and fun packed the game series really is, and now the franchise is about to bring all this fun to your latest console by entering the next generation of gaming with the Uncharted 4: A Thief's End  video game title that has just been announced by Sony for the PlayStation 4 console.

All the previous Uncharted games released on the PlayStation 3 console were hailed as top generation defining games, and from the newly released Uncharted 4: A Thief's End E3 2014 trailer, it looks like the next-gen game in the series will come as a serious spinner in the PlayStation 4 exclusive video games library. Uncharted 4: A Thief's End is actually here to define what Sony's next-gen console is capable of. Capitalizing the power of PlayStation 4, Naughty Dog has put everything into the upcoming Uncharted 4 that a real adventure video game should have. With stunning next-gen visuals, the game features such beautiful in-game environments that you would never want to put an end to this adventure. Without further ado, let me first present the Uncharted 4: A Thief's End E3 2014 Trailer to you, which was shared at Sony E3 2014 press conference.

Graphics and visuals are very important aspects of next-gen games, but here, you are not in only for good looks. The real figure that will strengthen your affair with Uncharted 4: A Thief's End is, like all previous game in the series, the main storyline of the game. The game will feature Nathan Drake, the same old protagonist of the series, and his crew in a whole new way. According to the developer, the storyline of the game will be very exciting and consistent with the previous stories. Players will not have to play previous games in the series to completely enjoy Uncharted 4 as it will be a stand-alone adventure. Blended with awesome and epic moments, the trailer shared above is enough to make you think about the upcoming game.