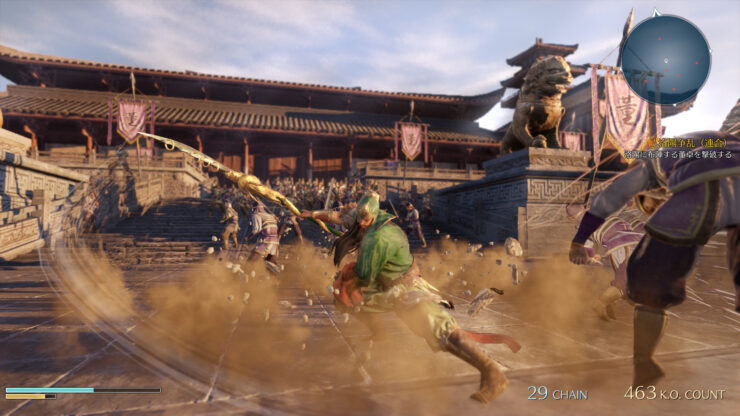 KOEI Tecmo announced Dynasty Warriors 9, the next major installment in the franchise, over the course of last week.

According to the company, this is their most ambitious entry to date. It will be the first one to use a fully open world design with dynamic day/night and weather. In a couple of interviews with Chinese and Taiwanese websites, the developers revealed some additional info to what we knew from the press release.

First of all, Director Atsushi Miyauchi confirmed that Dynasty Warriors 9 will run at "stable" 4K@30FPS or 1080P@60FPS on PlayStation 4 Pro, which is even more impressive when you consider the vastly improved graphics showcased in the screenshots below.

Those are the same options available in Nioh, which can't be a coincidence. There's no mention of the original PlayStation 4 target resolution and frame rate, but if it's like Nioh then players should be able to choose between 720P@60FPS and 1080P@30FPS.

Unfortunately, there won't be any online multiplayer action in Dynasty Warriors 9. In fact, Omega Force said they're having troubles even with implementing local co-op due to the new open world mechanics, but they might add some asynchronous online elements in a similar fashion to Nioh.

NiOh style asynchronous MP will be interesting if they can implement it, but no plans for now.

In another interview, Producer Akihiro Suzuki reportedly said that there will be over 90 playable characters in total, with more than one new female character added to the game.

#DynastyWarriors9 news
Producer Suzuki said in a Chinese interview that #DW9 will indeed have over 90 playables!https://t.co/RGWlt8D4Cf pic.twitter.com/ePxB0pJVi3

Which means we can expect 8-9 new characters in #DW9

The game should be out near the end of the year in Japan, which means we'll see it at some point in 2018. So far the only confirmed platform is PlayStation 4, but it's fair to expect it on PC as well considering that both Dynasty Warriors 8 Xtreme Legends and Dynasty Warriors 8 Empires came out on Steam.

In DYNASTY WARRIORS 9, players will explore China as it existed when feudal warlords vied for dominance over the land – the waning days of the Han dynasty and emergence of the Three Kingdoms era. Setting out to complete various objectives, players will utilize an unprecedented world map to navigate and traverse a variety of different landscapes ranging from vast plains to snow-covered peaks presented with dynamic day/night and weather cycles. Exploring these impressive environments is made more engaging through the ability to adapt to surroundings to gain an upper hand in battle, with players able to use equipment to circumvent obstacles or blend in to avoid conflict.

The sweeping new narrative of DYNASTY WARRIORS 9 is portrayed across the game’s Critical Missions and Regular Missions which intertwine to allow players to experience history across a multitude of perspectives and battles throughout the whole of China. 83 characters from the DYNASTY WARRIORS series make their return in addition to new faces such as Cheng Pu, a long-term retainer who supported three generations of the Sun family and contributed to the expansion and stability of the Wu kingdom.