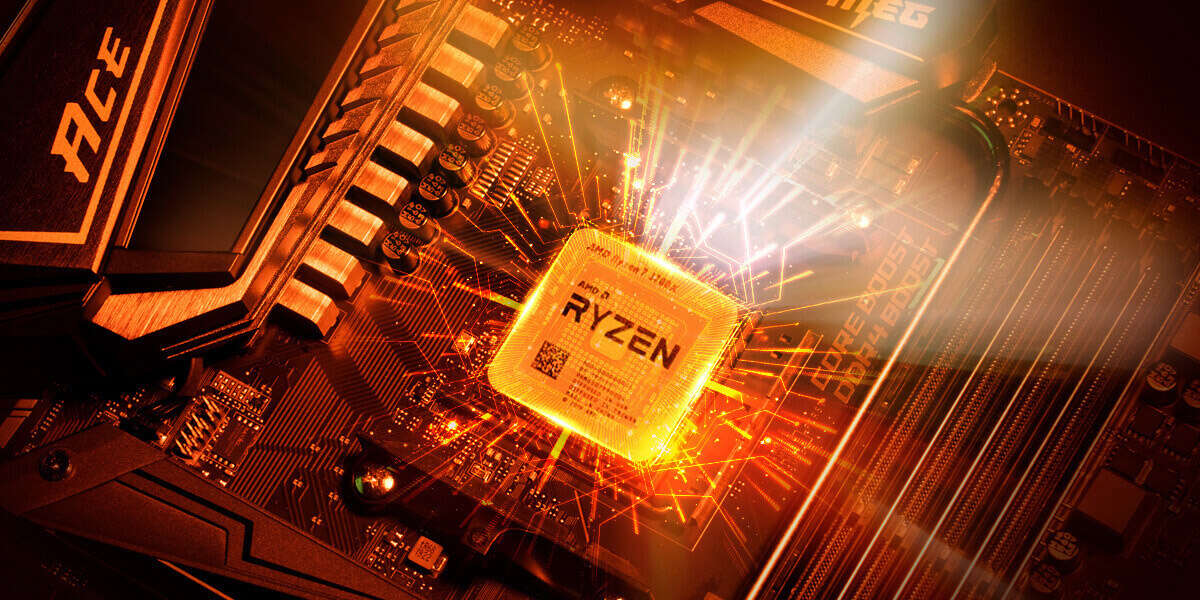 The DRAM Calculator for Ryzen 1.7.1 which supports AMD's Ryzen CPU platform is one of the few versions that has received a global memory retest on the newest AGESA. Over 900 hours were spent testing memory based on Samsung b-die, Micron e-die (062 and 055), and Hynix CJR(DJR) chips.

The changes affected all settings, from procODT to VDDG operating voltage. Another important change is the presence of profiles with odd tCL15, this will eliminate the problems that users have encountered trying to stabilize the system with the value tCL14. Also in this release, the user interaction with the program has been simplified, in particular, 1.7.1 has deleted the R-XMP button (one extra user action). Now the order is as follows:

1) The user selects the settings that match his system. 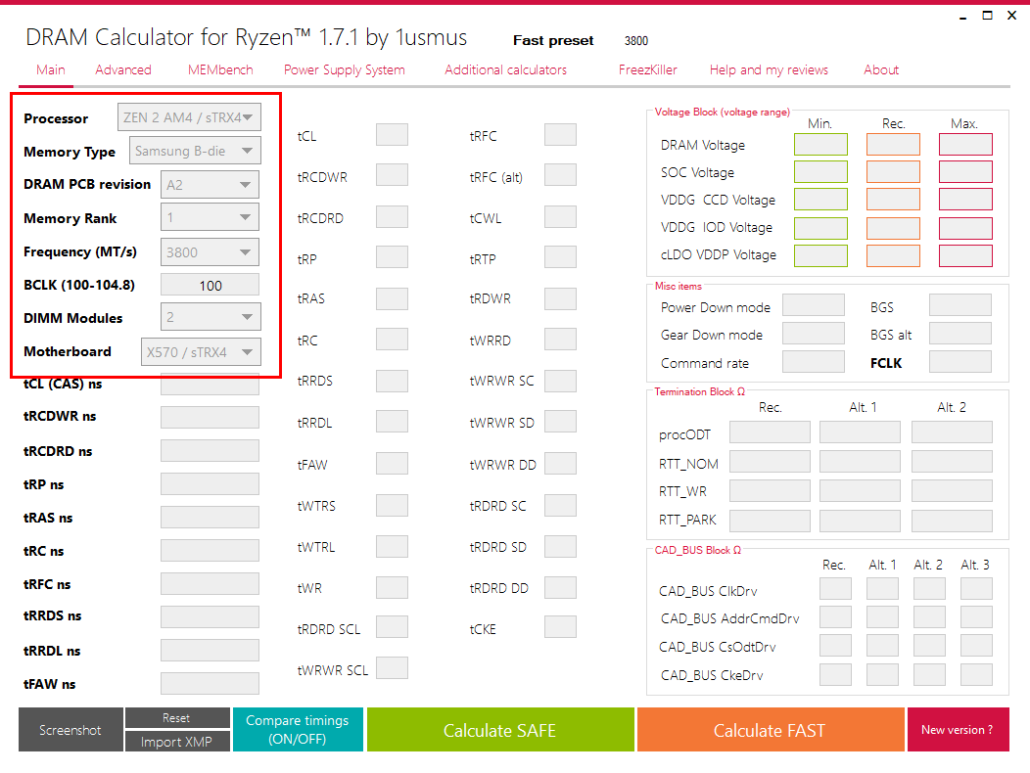 2) The user presses the "Calculate SAFE" or "Calculate FAST" button and that is it. 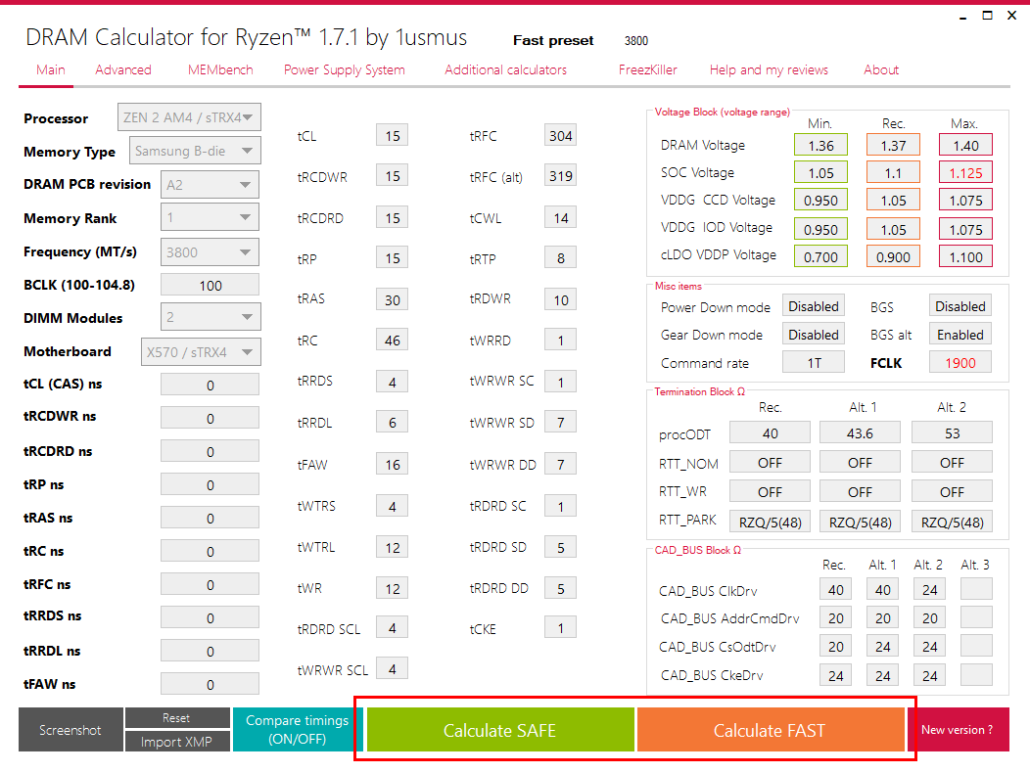 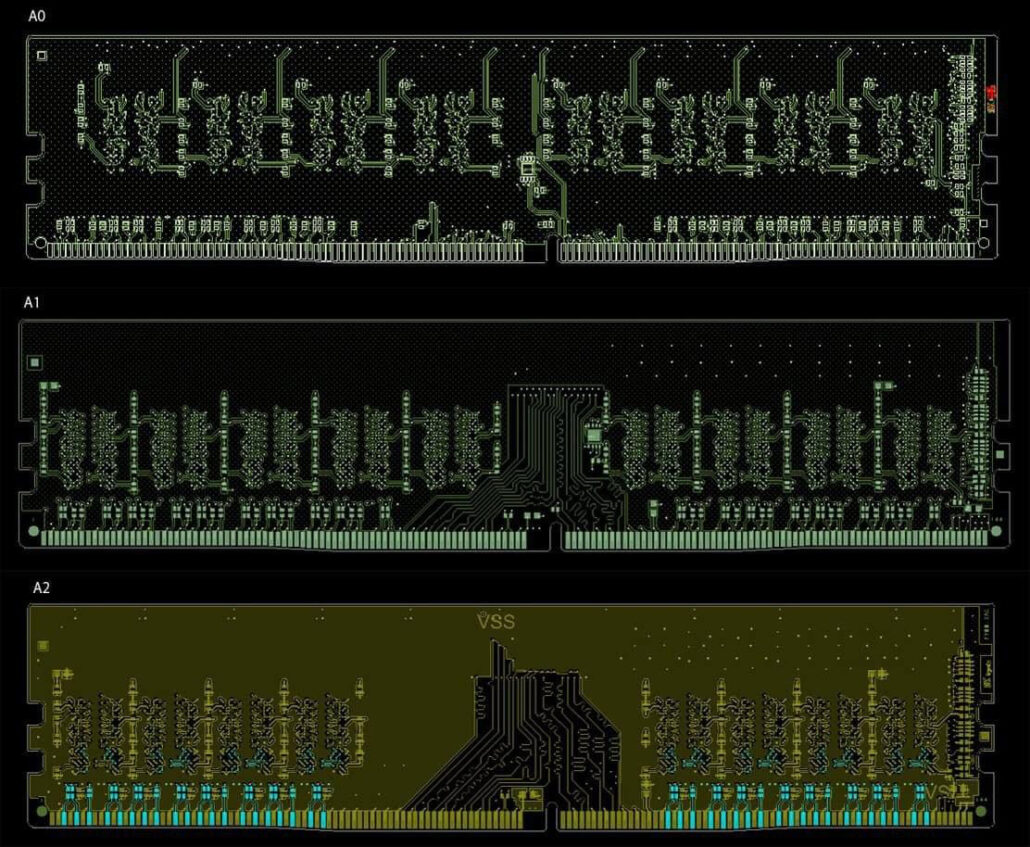 Note the sockets for the memory chips. In the case of A0, they are equidistant, and in the case of A2, we have 2 groups of 4 modules each. That's all we're interested in, actually. When visually inspecting the memory, we can determine for ourselves on which revision of the PCB your memory is based. A1 is most often found in OEM products that have an ECC module. We are not interested in this type of memory, because it does not give way to overclocking.

Also in the DRAM PCB Revision point, you can see the option "Bad bin" - it exists for the situation when the settings offered by DRAM Calculator for Ryzen™ do not allow to start the system.

The "Manual" option has not changed its functions and is used to calculate timings after importing a profile from Thaiphoon. 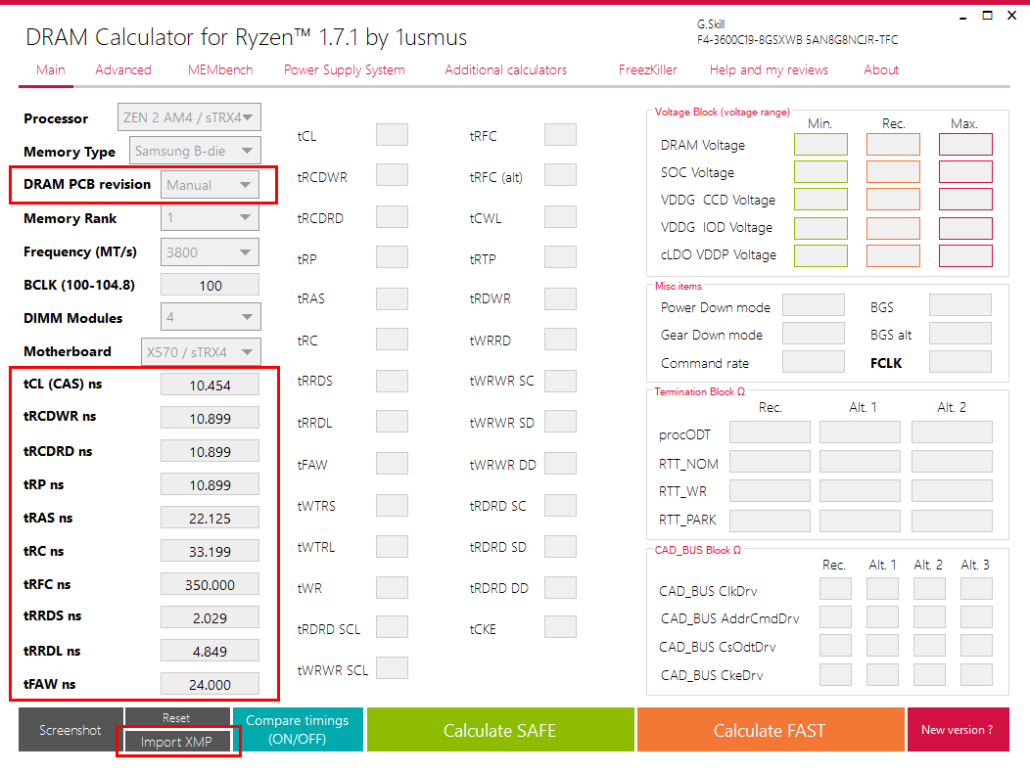 Another important innovation with DRAM Calculator for Ryzen™ 1.7.1 is the updated functionality for the "Compare timings (ON/OFF)" button. It now not only shows the current timings but also the ones that are "heavily jammed", look satisfying, or can be reduced further. In the form of indicators, the colors from red to turquoise (4 levels of colors). Let's take an example: 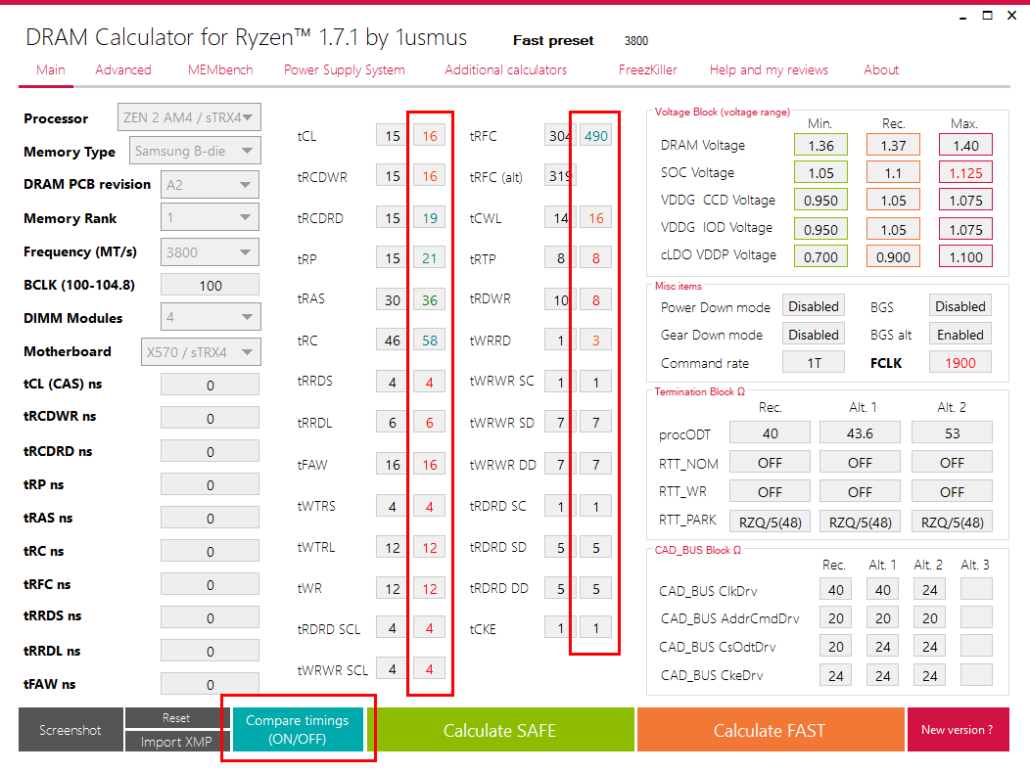 As a result, even an inexperienced user will now know where to "spin" the timings. This tool will help users in situations where "SAFE" is stable, but "FAST" has errors.

At the moment this function is limited only by memory based on Samsung b-die chips and the entire line of AM4 processors. If the feedback is positive - this function will be distributed to other types of memory.

The last visual change is the new menu "Help and my reviews" - the section where there are buttons-links to my materials (reviews) and to other information sources or forums. 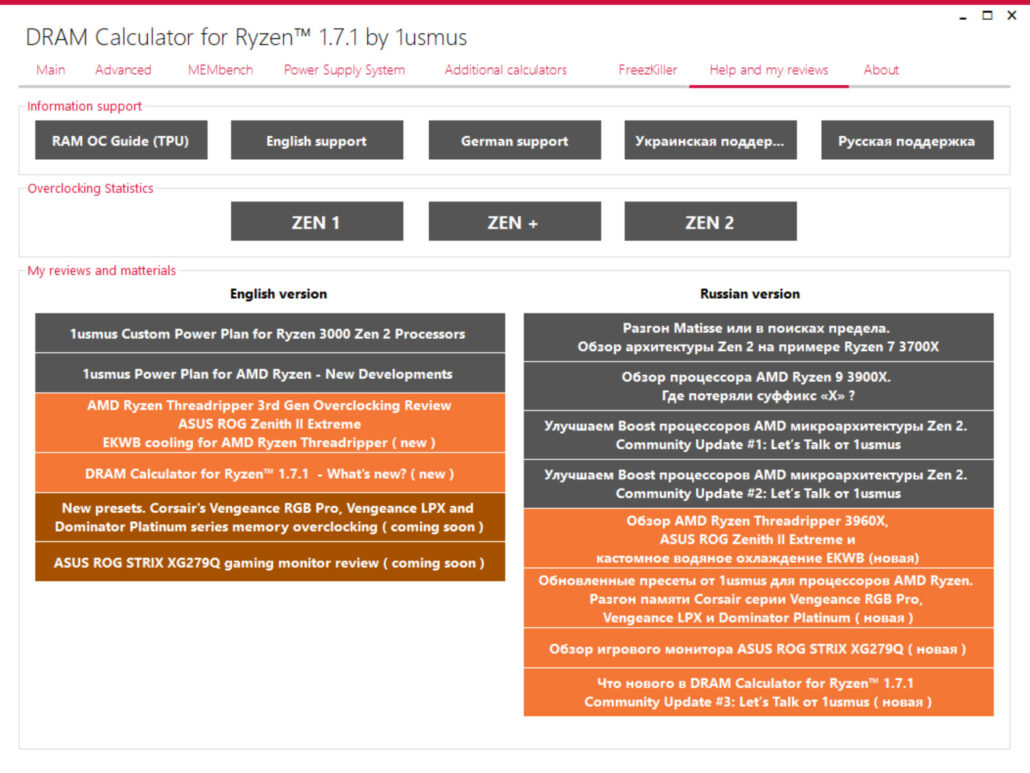 Most materials have several language versions for your convenience. I promise that the review of the keyboard will not come too 🙂

The list of all changes can be found below:

The latest release can be downloaded through the following links: