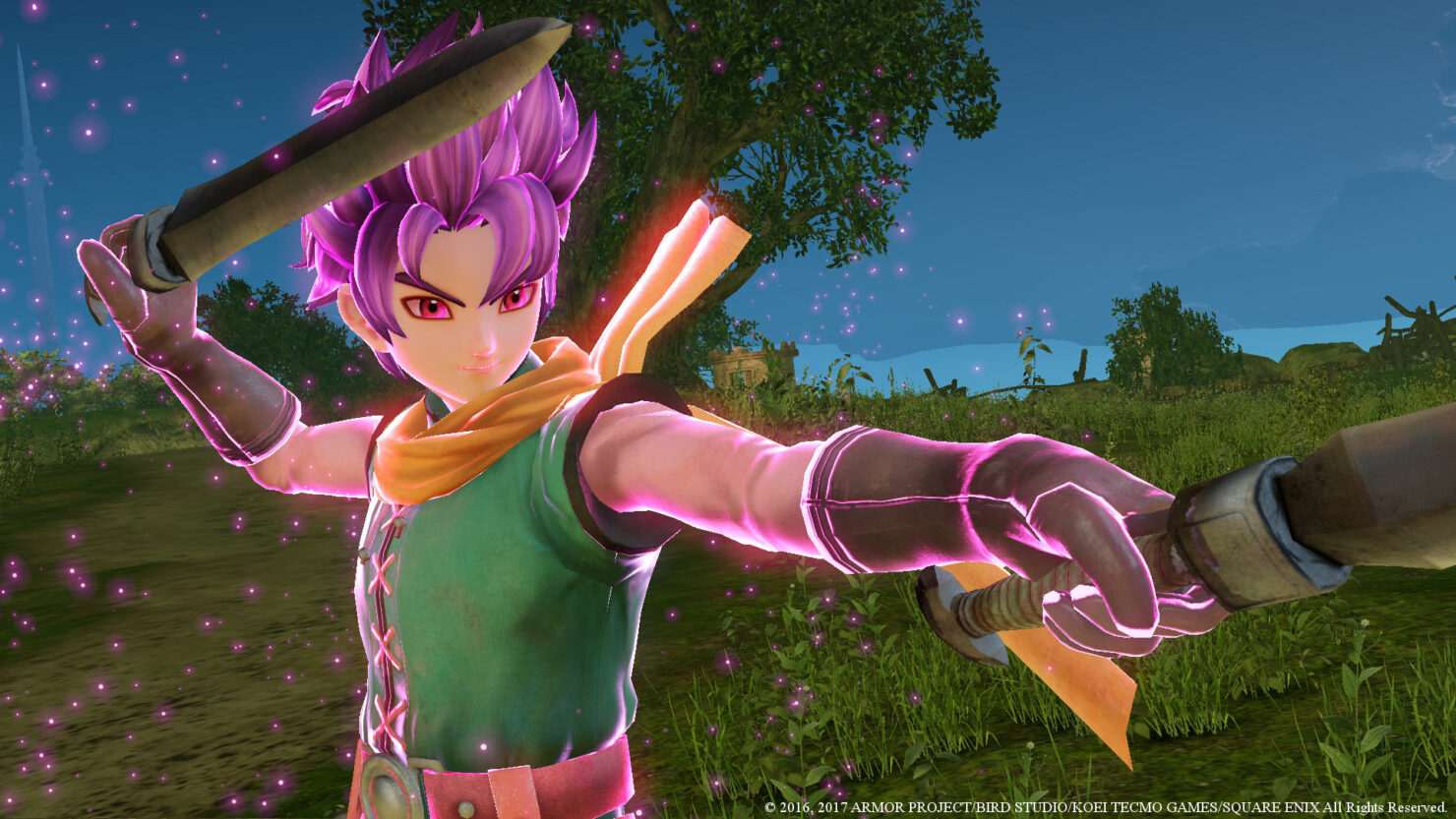 Unlike most Dragon Quest games, the Heroes spinoff titles take the series from their RPG roots into the modern era with hack-and-slash action. I had the chance to play DQH II for just over two hours, giving me a very different opinion of the Dragon Quest games overall. The Dragon Quest Heroes games are developed by Omega Force, the same team behind the Dynasty Warriors games.

If you’ve ever played a Dynasty Warriors game before, you should know what to expect from DQH II’s combat. Just like all of the games developed by Omega Force, DQH II features a team of characters taking on swarms of creatures. However, the similarities between these games appear to stop here. DQH II attempts to focus more on the RPG aspects of the game rather than purely dealing with combat. Traveling won’t be as simple as clicking on a map and entering the battle, instead you will have to move your entire party across towns as you find quests to complete. 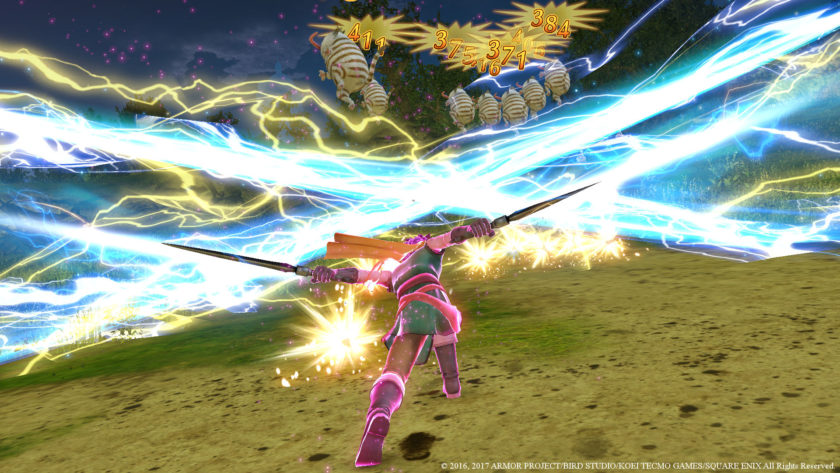 You begin the game as Lazarel, a trainee swordsman. It is explained by a narrator that once the war ended one thousand years ago, the people of the world made a solemn pact never to fight again, splitting the world into seven realms. Lazarel, along with his cousin Teresa and slime Healix, are interrupted during their meal by a sudden and completely unexpected battle. It turns out that the solemn pact has been broken, and now the Seven Realms must fight in an all-out war. Despite war being forbidden in the Seven Realms, Lazarel and Teresa are both combat trained, because you never know when you might need to fight someone… especially in a world where war is forbidden.

As I mentioned earlier, I’m not well-versed in Dragon Quest lore, so I’m not sure if the story is typically strange like this is. This game is very much for Dragon Quest fans, so don’t go into DQH II expecting to find out why there are floating slimes around, let alone why some of these slimes can talk. I apologize for not being able to appreciate the fan service in the game, I’d be willing to bet most of the people who plan on buying DQH II will be fans of the series beforehand.

The dialog in Dragon Quest Heroes II is incredibly cheesy, featuring such lines as: “Leave it to us, big man! We’ll get the High King to help, even if we have to twist his arm off!” and “This little beauty’s going in a stew!”. Coincidentally, these quotes would've fit in well with the Dragon Quest Monsters: Joker advertisement... While you may be thinking just how cheesy these lines are, you’ll need to listen to the excellent British voice-over to truly appreciate the hilarity of the cutscenes. I enjoyed the cutscenes much more than I thought I would, not because they were interesting but because some of them were genuinely funny. What better way to enjoy a break from button mashing than to watch a British, childlike, creepy slime-thing talk to a swashbuckling squire?

Speaking of the button mashing in DQH II, for the most part that’s all you will be doing during the combat. Expect to switch from each character in your party as you perform the same spells until you are out of mana, then you get to wait for your mana to regenerate before doing it again. It’s not particularly difficult and, well, it’s just not that fun. The multiplayer mode, on the other hand, does seem to be more difficult. Teams of four players can group together to finish missions, forcing each player to fulfill a specific role (tank, healer, DPS). DQH II was actually fun to play with three other people. The game was significantly more difficult (multiplayer was the only time I died throughout my play session) as it felt like I was doing more than just mashing buttons. 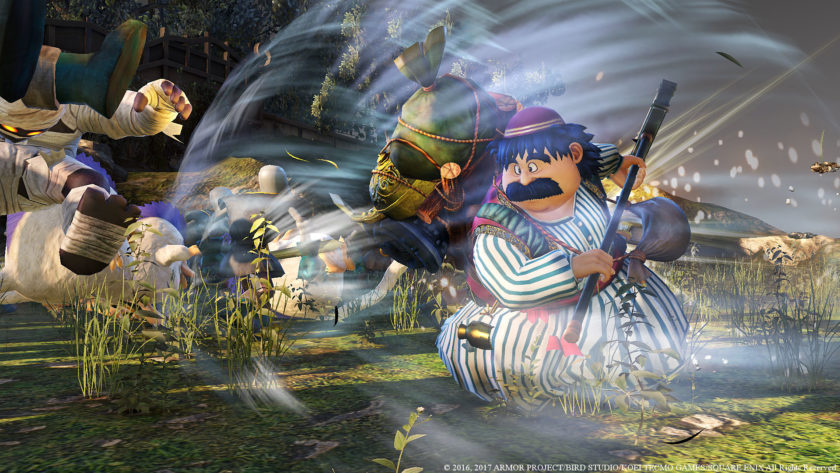 I played Dragon Quest Heroes II on a stock PS4. The frame rate tried to aim for 60FPS but would consistently drop during combat. I can’t fault the game for trying to achieve a high frame rate, even if it isn’t always rock solid. Those of you who happen to have a new Nintendo Switch may have tried out some of the demos on the Japanese store. There’s a DQH II demo which doesn’t seem too bad at first. It looks identical to the PS4 version, that is until you start moving around. DQH II on the Switch runs at 30FPS, dropping as low as 20FPS during combat. It’s such a shame as DQH would fit perfectly on a handheld system, but if it can barely run at 30FPS then I cannot recommend it.

I suppose I would recommend Dragon Quest Heroes II to people with a Switch who don’t mind the frame rate drops. If you are a fan of the Dragon Quest series and you happen to like the Dynasty Warriors games, you may want to check this game out. For everyone else, there’s not going to be a lot that makes you want to play this. The story doesn’t seem to be particularly engaging and you can find better combat in a lot of other games.

Dragon Quest Heroes II is scheduled for release on April 28th for PC and PlayStation 4. The release date for the Nintendo Switch version has not been confirmed.