iOS 9.0.2 download for iPhone, iPad and iPod touch has been released. Here's what is new in the update.

Just like iOS 9.0.1, which was released a while back, today's build for iPhone, iPad and iPod touch devices is a pure bug fix release, and here's what you can expect it to fix once you install it onto your device: 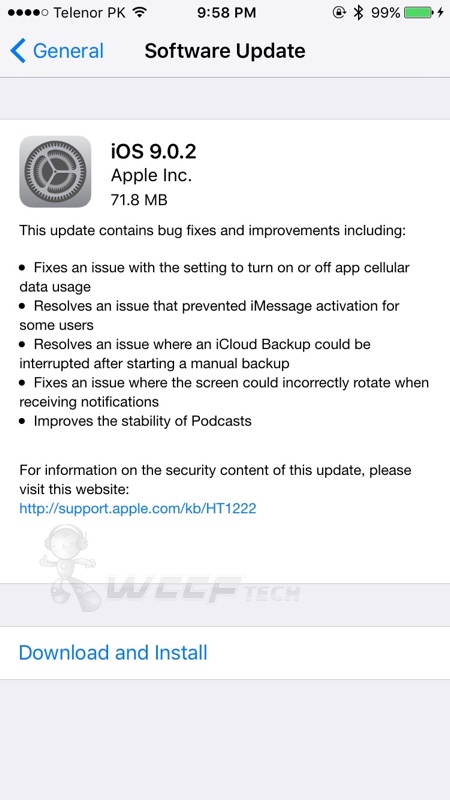 As you can see from the changelog above, iOS 9.0.2 is by no means a feature release, and has been solely pushed out to end users to squash bugs that have been bothering iPhone, iPad and iPod touch owners since iOS 9 was released.

If you've been facing issues with iOS 9, then we highly recommend that you update to this release straight away. If you want to update over the air, then simply make sure that your device is charged above the 50% mark and plugged into a charge. Also make sure that you're on WiFi. With that out of the way, launch the Settings app from your home screen, then tap on General. Over here you should see an entry labelled 'Software Update.' Tap on it and wait for it to refresh. After a few second the iOS 9.0.2 update will be presented to you, which you can then download and install onto your device.

If you want to update from scratch, then you'll be needing the iOS 9.0.2 firmware file, and you can download it tailored for your device from the links which we have added below.

We highly recommend that users do not hesitate to update to iOS 9.0.2. After all, it aims to make your device more stable and given that the issues people have been facing with Cupertino's latest mobile OS, there's no way you should shy away from the update at this point.

Installed iOS 9.0.2? Be sure to let us know what you think about the update.