Apple has released a special software update just for iPhone 5 and iPad mini owners who can now download iOS 6.0.2 direct on the said devices. This actually happens to be an incremental update. It is basically an update which does not come with any new features or updates, rather it comes with a host of bug fixes, improvements and subtle behind the scenes tweaks. 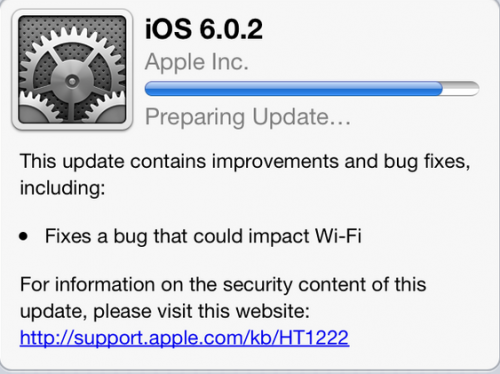 This update contains improvements and bug fixes, including:

• Fixes a bug that could impact Wi-Fi

For those who are wondering how to download iOS 6.0.2 for their particular iOS device, it is not unusual for Apple to release a firmware update for specific devices. This update is for iPhone 5 and iPad mini only, as it includes the fix for a bug that could impact the use of Wi-Fi on these devices.

So don't panic if you can't find how to download iOS 6.0.2 for your other iPhone or even iPad for that matter. This update is only for iPhone 5 and iPad mini. You can download iOS 6.0.2 for these devices either over the air, by using the direct download links provided down below or by plugging in your device in the computer and updating straight from iTunes. For devices other than iPad mini and iPhone 5, iOS 6.0.1 is currently the latest firmware version.

Meanwhile Apple is also hard at work on a major iOS update that is due to be released in a couple of months. A couple of iOS 6.1 betas have already been seeded to developers. This major update will come with a number of changes, most notably a fix for the horrendous Maps application of iOS 6.