The magical number in gaming, and for console games especially, seems to be 1080P while churning out a mostly steady 60FPS. This is especially true for Doom, but not just to please gamers in and of itself. Instead it's all about the 'feel of the game'. 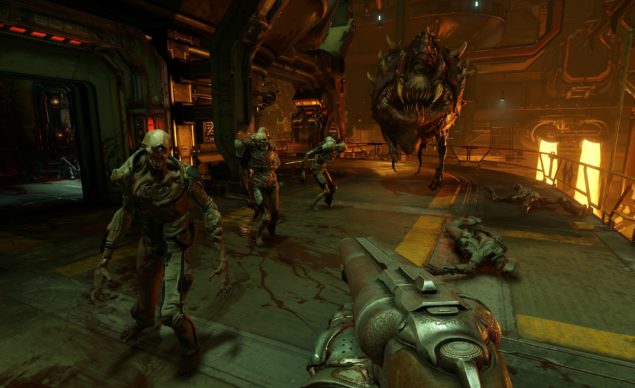 Doom wants 1080P and 60FPS to help impart the feeling of fast-paced mayhem.

Gamespot sat down with Marty Stratton, the executive producer for Doom, at Quakecon. He spoke candidly about the challenges associated with what might be a technically lofty goal with the increase in fidelity associated with modern game engines.

"When you're developing, you make thousands of decisions that have an impact on performance or visual fidelity. We've always been at the forefront of saying we want our games to run as fast as possible at the highest resolution possible. So for us, that goal is 1080p and 60 FPS. Along with that goal, the mantra of our technology team is that we want to be the best-looking game out there at 60 FPS and 1080p. So you draw that line in the sand."

Obviously hitting the magical number while still running consistently at 60FPS is ideal as a goal just for itself. It would be bragging rights among some console games if it happens to look fantastic too. But there are other reasons to want to reach that, some of them even having to do with the game itself. For you to get the proper experience, it'll need to be at least 1080P and 60FPS. Stratton went on to explain precisely why:

"For us it isn't just a lofty technical goal. We really do think it's important to the feel of the game, it's important to the way our combat feels and our movement feels. It's got to be fast, it's got to be fluid, and it's all based on that. It really is a gameplay goal first and foremost. You do make decisions here or there. Ultimately I don't think you can ever expect most consumers to really nitpick."

Of course this means a consistent framerate is needed, even if it doesn't always meet the highest target. Stratton went on to talk about why that consistency is key and certainly one of their main goals:

"If you do your best to give them a very consistent experience and a very high-quality experience, which for us is a fast, fluid 60 FPS, I think that's the most important thing. It's when you cut corners and you end up with a game that doesn't feel that good, and it's slow, and it's just a hodgepodge of a lack of focus throughout, that's when things start going awry. I think we'll hit all of our goals."

It wasn't clear from the Gamespot article if resolution and FPS are going to be limited for all versions or if this target is only for consoles. It's relatively safe to say that given iD Software's PC roots, we can expect a plethora of customization options, to include higher than 4K resolutions and a framerate not locked.

Doom is coming in 2016 for PS4, Xbox One and the PC. Thus far Doom seems to be finding inspiration in it's roots, as well.