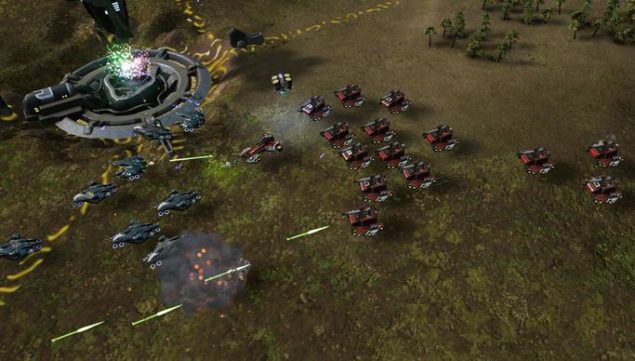 The first ever native DirectX 12 game, Ashes of the Singularity, has hit Beta 1 status.

Developer Stardock, who have previously released Sins of the Solar Empire, announced the release of the new build earlier today. They say they're aiming to deliver planetary warfare on a scale never seen before in gaming - no big deal then.

In Ashes of the Singularity, gamers aren't fighting a battle, they're fighting a war. Players command thousands of units across a vast battlefield while building up their economic and technological might.

Over the past few months we've worked closely with AMD and Nvidia to fully leverage their hardware. Our alpha testers have reported substantial performance gains, which is allowing us to begin lowering the hardware requirements.

Our goal with Ashes of the Singularity is to help introduce a new generation of gamers to real-time strategy games. We want to make a game where players can invite their friends in and be up and playing relatively quickly without a lengthy explanation about how to play.

Ashes of the Singularity is boasting a number of features, including these ones straight from the press release:

The first native DirectX 12 game allowing each CPU core to command the player's GPU simultaneously, which allows for more rendered units to be displayed on screen at the same time - by an order of magnitude - than in any previous RTS game to date.

A new native 64-bit 3D engine called Nitrous that makes full use of the features of DirectX 11 and DirectX 12, allowing for thousands of light sources on screen simultaneously.

A new type of unit group organization known as a "meta" unit that makes it easy for players to manage potentially tens of thousands of units across a world.

Advanced Nitrous 3D engine allows players to zoom out on the map without having to transform the map into a simplified view of the battlefield.

Access to the game is currently available to buy via Steam and GOG. It includes single player skirmish, co-op multiplayer, and ranked multiplayer. Beta 2 is set to be available next month and it will feature multi-GPU support, including support for mixed AMD/NVIDIA GPU setups and a new 3D benchmark mode.

The final release is still planned for Spring.