We recently posted about AMD's latest Mantle update which arrives for Battlefield 4 today along with the new Catalyst 14.1 BETA drivers. Good news is that the update for Battlefield 4 has officially gone live and is available for download with a size of 1.23 GB. 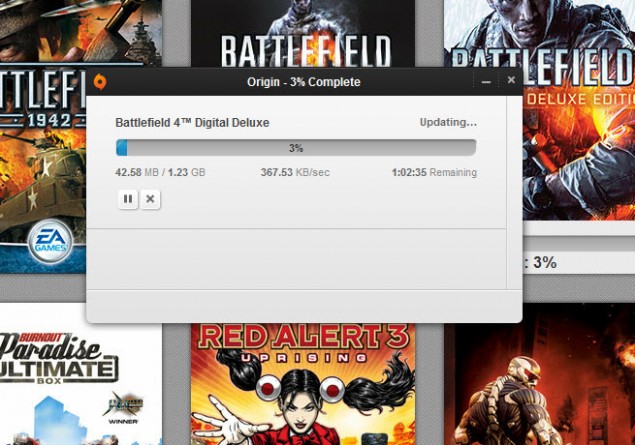 The Mantle update for Battlefield 4 is officially geared toward AMD based hardware but will show performance improvements with both Intel and AMD processor based rigs since Mantle removes a lot of the load from the CPU to allow the GPU to run at its true potential. Users who are currently using Kaveri APUs along with GCN based graphics cards would expect a massive improvement as compared to users with FX CPUs or intel's high-end range of processors. Do note that Mantle update doesn't has any sort of restriction when it comes to CPU so gains are expected across both Intel and AMD based processors since it offers more in-depth utilization of the hardware. A post in the previous article by our writer Usman Pirzada provides a good explanation to this:

The Mantle update for Battlefield 4 is 1.23 GB in size and not only brings support for Mantle but would also increase stability of the game along with some gameplay balances and changes. The changelog for Battlefield's latest update has not been posted yet but i will publish in this article as soon as it is available.

The biggest performance gains can be seen when the game is bottlenecked by the CPU which can be quite common even on high-end machines and this was main goal to improve on with Mantle. We’ve also been able to streamline and optimize some of the GPU workload. The end result is that game performance is improved in virtually all scenarios in Battlefield 4 on both Windows 7 and Windows 8 when running with Mantle!

This update is the first release of our new Mantle renderer, and we will continue to provide more tuning for different types of configurations in future updates.  Still, we are really happy with the performance improvements that we are seeing with this update and we believe you will be as well. Johan Andersson DICE

Here's how you can update your Battlefield 4 with the latest patch:

In order to use Mantle you will need the following:

If you have the above you will see a new “Graphics API” option in the in-game Graphics Options settings after starting the game, here you can switch between using DirectX 11 and Mantle (remember to restart the game after changing). 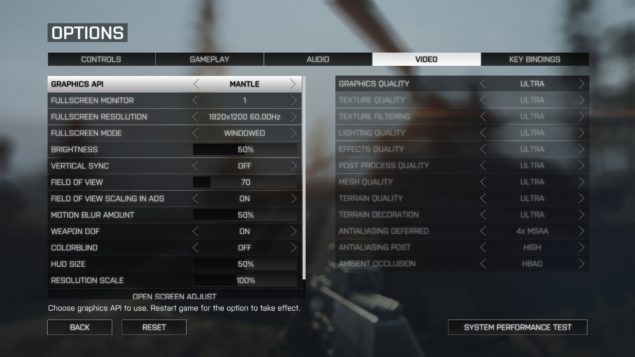 Mantle Support
The new Mantle renderer has been added in Battlefield 4. Most players can expect a performance increase by using this new low-level graphics API.

CPU/GPU performance and monitoring
-Tweaked and improved CPU multi-core utilization to try and avoid stuttering and low framerate due to stalls that happened on some CPU and OS configurations.
-Users can now configure and control themselves how many CPU cores should be used in the game with the new “Thread.MaxProcessorCount” settings in User.cfg.
-“Render.DrawScreenInfo 1” now also shows information about which CPU and GPU is in the system, how many GPUs & CPU cores are used and which renderer (DirectX 11 or Mantle) is active
-Added new “PerfOverlay.FrameFileLogEnable” command that records frame times on CPU & GPU and logs out to a .csv file
-AMD Catalyst driver 13.12 (or later) is now recommended instead of 13.9
-Enabled tile-based compute shader lighting optimization on Nvidia for improved GPU performance (already active on AMD GPUs)
-Improved performance with rendering and spotlights for all GPUs, primarily in in-door environments

DMR Balance Tweaks
-Increased the damage of all DMRs across all ranges. Specifically, damage has been increased at long ranges to allow three-hit kills against unarmored opponents. Additionally, reduced the penalty to accuracy for sustained DMR fire, allowing more rapid follow up shots in combat. The amount of the damage increase varies from weapon to weapon, according to its intended range, rate of fire, and damage. We will continue to monitor the effectiveness of DMRs in combat, and determine if additional action is needed to make DMRs a viable mid to long range weapon.

Other Items
-Greatly reduced the risk of crosshairs disappearing, which would also result in hit markers disappearing
-Added a headshot icon on the killcard. This should help identify instances where players are correctly killed by one shot
-Fixed an issue in Squad Deathmatch where the “Win/Lose” text was overlapping
-Fixed an issue with players using an exploit for the SOFLAM
-Fixed an issue with players using an exploit for the MAV
-Fixed the gameplay code to properly track the FOV (Field of View) changes in the options menu
-Fixed an issue where chat would break when entering "false" or "true" in the chat window
-Fixed an out-of-helicopter glitch in Air Superiority where players could spawn on the ground and play as infantry
-Fixed the misaligned crosshairs on the T90 MBT
-Added setting to tweak joystick dead zone
-Various minor crash fixes

Battlefield 4 Mantle Update Screenshots (Before vs After)