Deus Ex: Mankind Divided was recently revealed with an incredible CGI trailer, and there have been a few updates from members of the development team, sharing some nice new information regarding the game. 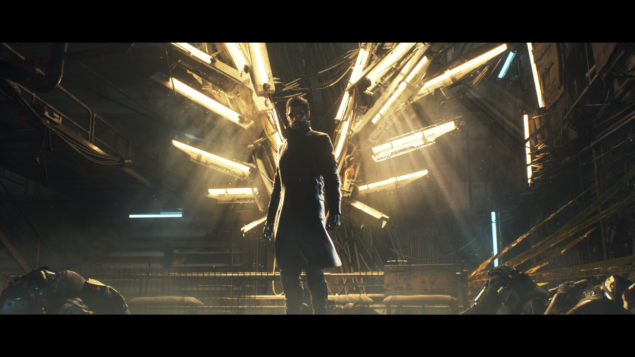 Elias Toufexis, is reprising his role as the voice of Jensen in the new Deus Ex: Mankind Divided. In an interview with Twinfinite, Toufexis talks about his experience as Adam Jensen, and the new title in the Deus Ex saga.

In response to his thoughts of how the trailer of Deus Ex: Mankind Divided turned out, he replies.

I was saying to the marketing team the other day that CGI trailers are getting to the point where they literally cannot look any better without crossing into that creepy “uncanny valley” of looking too real. The trailer looks and sounds beautiful. Also, it shows or hints at many great things in the actual game. I couldn’t be happier with the trailer or the reaction. It was hard to top the Human Revolution “I never asked for this” trailer. This one at least equaled it.

He continues to explain his feelings after the leak of the trailer.

I’m still kind of ticked that it got leaked early. The marketing team took me through their whole reveal plan, and it was a wonderful way to introduce the trailer. After all that, someone let everything slip. The marketing people worked so hard and had the rug pulled out. So, that person who leaked it is definitely not in my cool book. All that being said though, the trailer was a huge success. I’m ecstatic about how it’s being received. Millions upon millions of views and almost all of them with an incredibly positive reaction. We have a whole lot more planned too.

Toufexis was asked about his reaction to being asked to reprise his role as Adam Jensen, to which he answers,

About two years ago I got a call from some of the creators and they told me that Adam might be coming back. Of course, I’m incredibly excited and I love playing Adam. I think we stumbled onto something that isn’t easy to do with Jensen. Between his great design, the gameplay, the writing and the music, Jensen has become somewhat iconic in the videogame world. I think it surprised everyone how popular he became. It was a no brainer to bring him back. As a gamer, I wanted to see where his story would head. When we were going over the story, I would bring up things that, as a fan, I wanted to see resolved. The story this time around is very complex.

Adam Jensen has seen some changes since the beginning of Human Revolution, so the approach to the role is a bit different this time, and as Toufexis explains this time he knew exactly where to begin and where to take his character.

Technically, I approached it a little differently in the sense that I know who Jensen is now. On Human Revolution it took me a few months of work to find my stride with him. (Something that I spot in DXHR gameplay. Parts of my performance are like nails on a chalkboard to me.) This time around I knew exactly where to begin and where to take him. Also, though I did a little bit last time, I fully performance capture and voice Adam. It’s much more freeing for an actor to not be locked in a sound booth for major scenes, but to actually be playing them like a film.

Being asked what is the one aspect of Adam Jensen that he is excited to portray in Deus Ex: Mankind Divided, Toufexis explains that Jensen's involvement in the world is much more personal this time, as Mankind Divided sees augmented people as second class citizens who are being victimized and brutalized,

My favorite thing about this particular game is Jensen’s involvement in the world he lives in is much more personal. The augmented people are now second class citizens. They are victimized and brutalized, and Jensen is one of them. The people he works for kind of keep him on the outside looking in, so to speak, but he empathizes with the augmented people. Some of them are victims, some of them are villains but he is just like them..whether he asked for this or not. That’s tricky to play, but a whole lot of fun. I really try to keep that empathy in mind for this story. (Though Jensen is almost subliminally subtle.)

Asked for the one phrase being associated with Adam Jensen's character Toufexis responds:

I think “I never asked for this” will transcend even this game. It’s as much a part of Jensen as my gravelly voice is. There is no tweet that I write where someone doesn’t ask me “Did you ask for this?”. I have people who ask me to say it for their phone message or ringtone. (Wait, why am I not charging for this? I’m making a ringtone when I’m done here). I don’t think it’s going anywhere. As far as a new phrase? That’s not up to me, it’s whatever people latch on to.

Deus Ex: Mankind Divided is being built on the new Dawn Engine and will support DX12 and AMD's TressFX 3.0 technology.