Remember when Dark Souls was announced for PC and the patient gamers would receive more content than the original games on the console? Well it seems like Namco is hungering for the souls of console gamers too as they have just announced an updated trailer stating that the contents of the Prepare to Die Edition are no longer PC exclusive and will carry over to the consoles as "Artorias of the Abyss" DLC content. Whether the content will be free or not is still under question but it will definitely be free to the PC gamers but cost the console gamers some , I mean money in their local currency ; ). 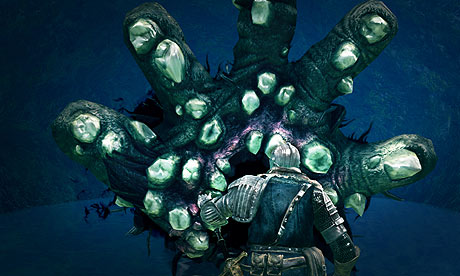 Gimme Five! No? THEN GIVE ME YOUR SOUL!

It seems that even though the PC version of Dark Souls has yet to release Namco has already announced that the previously PC exclusive DLC will now be available for consoles, maybe Namco is counting their losses right now and are going to make up for lost PC sales if they follow through on just a straight up XBOX 360 port with (possibly) no customizable graphics. So they can count for additional revenue from their fans with the sale of DLC labelled as the "Artorias of the Abyss" which will add a heck of a lot more bosses and enemies for players to get slaughtered by and ultimately after days and possibly longer of trial and error runs will they be able to once again conquer the demon that is Dark Souls.

This is of course an official announcement as you can see in the trailer but once again release date, price, availability and other details are still a mystery and hopefully revealed soon. For now take rest at your nearest Bonfire and await your punishment which of course you may or not have to pay for.

UPDATE: (Thanks to the folks over at IGN)

The Artorias of the Abyss  DLC pack will be available for 1200 Microsoft Points on the XBOX 360 and $14.99 for the PS3 for now the DLC will only be available for the North American consumers on a Winter release date and will be released on other regions for the consoles on later dates.

The PC version will also come on Steam AND Games for WIndows Live but it's not yet confirmed whether GFWL will be the direct medium to play the game (I Hope not) and the game is coming August 24th on the PC in Europe and Australia for the PC as retail and will follow on a later Winter date for the consoles.