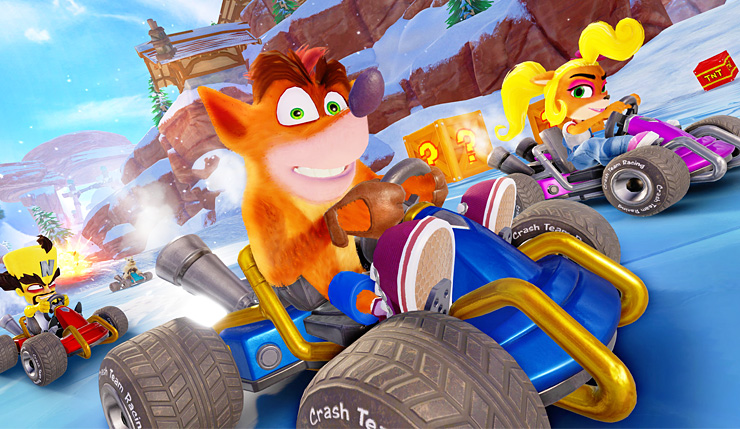 Crash Team Racing Nitro-Fueled hits the track in just under a month, and Activision and the folks at PlayStation Underground are whipping up hype with tons of fresh footage. First up, we have a look at the remade Dragon Mines and the new PlayStation-exclusive track, Retro Stadium. Check out nearly 15-minutes of action, below!

Looking impressive! With no new Mario racer on the horizon (that we know of) it looks like Nitro-Fueled is going to be a must-have karting fans. Here’s some additional detail about Dragon Mines and Retro Stadium courtesy of developer Beenox:

Like all of the other tracks In Crash Team Racing Nitro-Fueled, we have tried to give Dragon Mines an incredible level of detail and life that will envelop you like it never has before. Aside from the graphical updates and the art direction that went into the 2019 version of the track, a huge part of this process was giving a story to the track. This is something we’ve done with a lot of the tracks for the game — providing context to the detail that we have added. For Dragon Mines, the original track didn’t actually have any dragons in it (although it gets its name from being Komodo Joe’s home track).

For CTR Nitro-Fueled, we felt it would be fun to bring that element into it. The track’s story is simple: a group of miners have discovered an aging dragon’s treasure deep under the earth and have now built an entire community to harvest the treasure out. Creating this story gave us the direction to start animating a ton of fun details into the track, like miners working to the beat of the music, mischievous rats getting into trouble, and even a slumbering dragon, sitting on what’s left of his treasure, trying to breathe fire on the racers as they pass by (but unfortunately, only mustering a feeble puff of smoke before he loses interest and goes back to sleep).

The track is based off the original Turbo Track in Crash Team Racing, and to create it our team had a lot of fun reversing the mindset we were taking with all the other tracks in the game. While we’ve been spending most of our time seeing how we can bring the original tracks from CTR and CNK into the next stratosphere in terms of graphics and detail, with Retro Stadium we turned off the texture filtering in the level, scaled back details with a “less is more” mindset, and embraced the pixelated look of video games of the late ‘90s. With the high-fidelity qualities that we’ve been putting into all the other tracks in CTR Nitro-Fueled, we felt it would be fun to offer PlayStation players a way to step into the past with this track if they wanted to.