A new guide has been posted on the Ubisoft blog that gives a little detail about how crafting and gear customization in Assassin's Creed Syndicate might work. 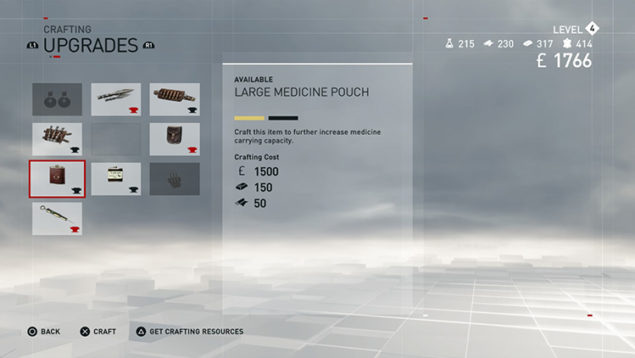 Upgrade weapons and items periodically through the use of a bona fide crafting system in Assassin's Creed Syndicate.

With a system that seemed to gain in popularity with Assassin's Creed Unity the upgradability of weapons, armor and other gear is back. The crafting itself isn't necessarily 'crafting' in the purest sense, as you're just acquiring certain resources to unlock upgrades for items and gear you already have. You won't be creating anything new.

But it looks like this upgrade mechanism will be a big part of the game. You can get the various resources that'll be needed, indicated on the upgrade screen itself, throughout London in chests or as rewards for various missions. Some of those materials will be rare, and are only found by completing specific missions. 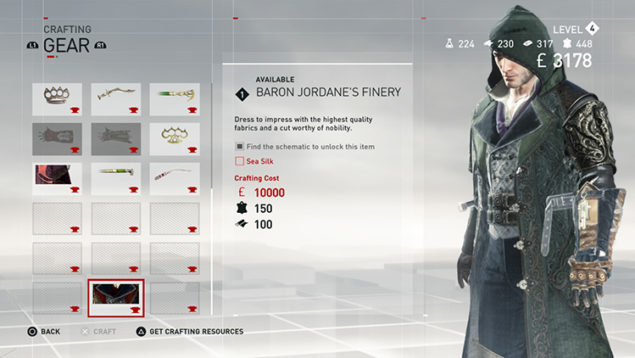 Some deep customizations options are also making their way into Assassin's Creed Syndicate as well. There will be quite a few different ways to dress up Jacob or Evie to make them unique while stalking the rooftops or streets of London. There's even plans for a Renaissance themed Batman outfit to be available as well. Of course you'll be able to unlock the outfits of the prior Assassin's as well. Look for plenty of armor and weapon upgrades to ensure some individuality. Ubisoft is making a few items exclusive Ubisoft Club rewards, which are apparently accessed simply by linking your Uplay account.

While it isn't really a crafting system, it's nice that there is an extra bit of difficulty by having special materials that have to be gathered instead of it being a little bit on the simple side. Do any of you think there is any value with this sort of system?