Coronavirus pandemic appears to be on a backfoot in China. According to the data provided by China’s National Health Commission (NHC) and quoted by CNN, no locally transmitted cases of the COVID-19 infection emerged anywhere in mainland China for the third straight day on Friday. This marks a striking turnaround for the country that, until recently, was considered the epicenter of the-now global health crisis.

China’s Health Commission confirmed 41 new cases of the coronavirus infection in the country on Friday. However, as was the case for the previous two days as well, the entire quantum of new infections pertained to international travelers arriving in the mainland from overseas. Even so, in a sobering development, seven patients already suffering from the disease died on Friday, raising the country’s total death toll to 3,255.

How was China able to contain this pandora’s box?

In order to gain an upper hand over the coronavirus pandemic, China instituted draconian measures – some might even call them positively Orwellian. Bear in mind that in a largely conformist, top-down Chinese society, the implementation of these measures was relatively easy. However, thriving democracies around the world might find some of the steps that China took unpalatable due to the propensity of such societies to remain tuned to the enshrined rights of a democratic populace. It is partly because of this inherent reluctance to curtail the individual freedom that several European countries are now the new epicenter of the coronavirus pandemic. This observation is not intended to undermine crucial democratic values. Rather, it serves to highlight that every government system in the world today has its merits and flaws. Undoubtedly, the merits of a democratic dispensation far outweigh its flaws. However, in the narrow confines of this pandemic, the western system of governance remains vulnerable.

In order to contain the coronavirus outbreak, China placed around 10 percent of the world’s population – over 700 million people – under a strict lockdown in a bid to enforce mandatory social distancing. The country also built two new hospitals in a matter of days, with one being built in as little as 7 days, to provide additional treatment space for the extraordinary rise in COVID-19 patients in Wuhan – the previous epicenter. Additionally, the country repurposed existing hospitals by enclosing entire wards within newly built walls. In scenes reminiscent of the ‘Robocop’ movie, China equipped some of its police personnel with infrared scanners mounted within protection helmets in order to surveil and detect any person with a fever.

However, the most crucial feature in China’s duel with the infection was the provision of necessary medical equipment on a war footing. Anyone suspected of having coronavirus symptoms was sent to one of a multitude of fever clinics where the person’s medical condition and travel history was thoroughly examined. If required, a CT scan would be performed as part of an initial screening. Finally, coronavirus test kits were freely and readily available, adding an indispensable swiftness to the entire diagnosis process. Anyone found infected with the virus was immediately isolated, thereby, limiting the spread of the infection.

It should be noted though that China’s infection countermeasures were not without their flaws. The country was roundly criticized by health experts for displaying inertia at the initial stage. This contributed to a ballooning of infection cases that could have been prevented had the country acted earlier. Nonetheless, China – along with South Korea – has given the world an effective model for combatting this disease.

Coronavirus threat continues to spread around the world 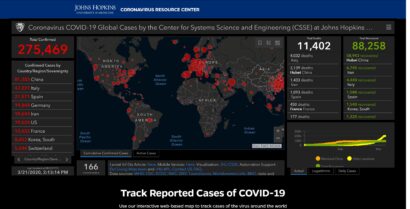 According to the tabulation by John Hopkins University, over 272,000 people have now contracted the virus and at least 11,310 have unfortunately died. Italy now has over 47,000 coronavirus infection cases and, in a grim development, the country has surpassed China when it comes to the total death count. As an illustration, 4,032 people have died from the infection in Italy as compared to 3,255 in China. Iran has emerged as the epicenter in the middle east with around 20,000 infections and at least 1,433 deaths. Iran reported on Thursday that the country was recording one death from the coronavirus pandemic every 10 minutes! In the United States, the situation is rapidly deteriorating with over 19,000 cases and 275 deaths. Moreover, the states of Illinois and New York joined California on Friday in ordering mandatory movement restrictions that now affect at least 70 million Americans.

Impact of the coronavirus pandemic

Apart from the grim human toll that the infection is exerting, the coronavirus pandemic’s economic and financial costs keep piling. While Foxconn (TPE:2354), a key node in Apple’s (NASDAQ:AAPL) production chain, is normalizing much of its production activities in China following a massive lockdown that the country instituted, other facilities in neighboring countries are now being affected by quarantines. As an illustration, Malaysia has become the latest country to institute factory closures for a period of two weeks, disrupting Apple’s supply chain in the process. Consequently, in several countries, Apple has begum limiting iPhone purchases from its online stores to a maximum of two devices per customer.

We have been covering the impact of the coronavirus pandemic on the global tech sector since January. You can find an exhaustive list of our articles on this topic by clicking this link.

Due to the forced quarantines and shuttering of workplaces in order to combat the coronavirus pandemic, Goldman Sachs has now forecasted that the U.S. GDP will shrink by a massive 5 percent during the second quarter of 2020 as the ravages of the infection continue. In a note sent last Sunday, the Wall Street behemoth said that it now sees real GDP growth of 0 percent in the first three months of the year, down from its original estimate of a 0.7 percent expansion. For the second quarter, it sees the growth in the U.S. contracting to -5.0 percent from its initial forecast of 0 percent.

In order to combat the economic malaise being spread by the coronavirus pandemic, the Federal Reserve announced last Sunday, just days ahead of its scheduled meeting, a massive round of stimulus that, among other steps, included a 100bp cut in the benchmark Federal Funds Target Rate to a range of 0 – 0.25 percent, matching the lows hit during the financial crisis of 2008 – 09. It should be noted though that if a recession materializes in the United States in the event of an aggravation in the economic slowdown, there is a high probability now that we will experience negative interest rates in the country for the first time in history.