Commander Keen officially turned 25 years old on the 14th of December. The first one was the mastermind of several icons in the gaming industry, made by people who are now veterans that have helped to shape the very direction that gaming has taken.

Back in 1990, John Romero, John Carmack and Tom Hall got together and created the first side-scrolling game for PC that rivaled the adventures of a certain mustachioed plumber from the prevalent console of the day, the NES. In fact, it actually began as a clone, and later a port, of Super Mario Bros 3. Nintendo didn't quite want to enter the PC market even then, though.

So the project evolved to become it's own masterpiece, drawing on some of the unique techniques that Carmack discovered to produce smooth side-scrolling action with EGA graphics cards, something not possible before. He hoarded that technique and thus this project was born. With $2000 in hand from Apogee, he and Romero made the iconic side-scrolling adventure that stars Billy Blaze, the 8-year old kid who takes on the whimsical personal as he explores the galaxy in his homemade space-ship. 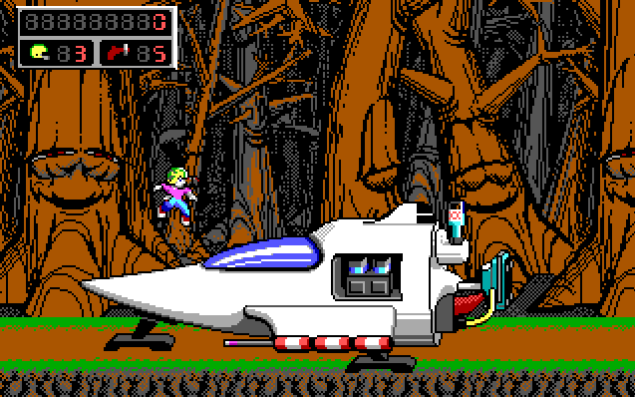 Does it stand the test of time, however?

Why yes, it certainly does. But lets not get the wrong impression, this is no remastered version using Unreal Engine 4. This is the original, unedited glorious EGA graphics version. And it's magnificent. The beauty lies in its simplistic yet gameplay and lighthearted visuals. It's a great casual game that doesn't require much attention, aside from having to struggle with the sometimes over sensitive jumping platforming controls that are more frustrating than any Assassin's Creed. But it's fun, and more than a match for today's overly complicated games. It's challenge to jump right where you want to, but the good thing is that variable jump height was a thing back in 1990. Once you get past that, the general atmosphere and level design are surprisingly creative and very intuitive. Commander Keen should have a remastered version now. And a movie deal.

This is nostalgia at its finest, but unless you've been living under a rock, it actually aged fairly well. The graphics are a sight to behold, the sound-effects trippy and the music is just great. This is a masterpiece that should be played and enjoyed by everyone.

So happy birthday Commander Keen! If you're interested, and you dare to play something so old, then you can check it out on Steam for $4.99. And don't forget the refund policy just in case you're disappointed. But I doubt anyone would be, even those who never grew up with it.