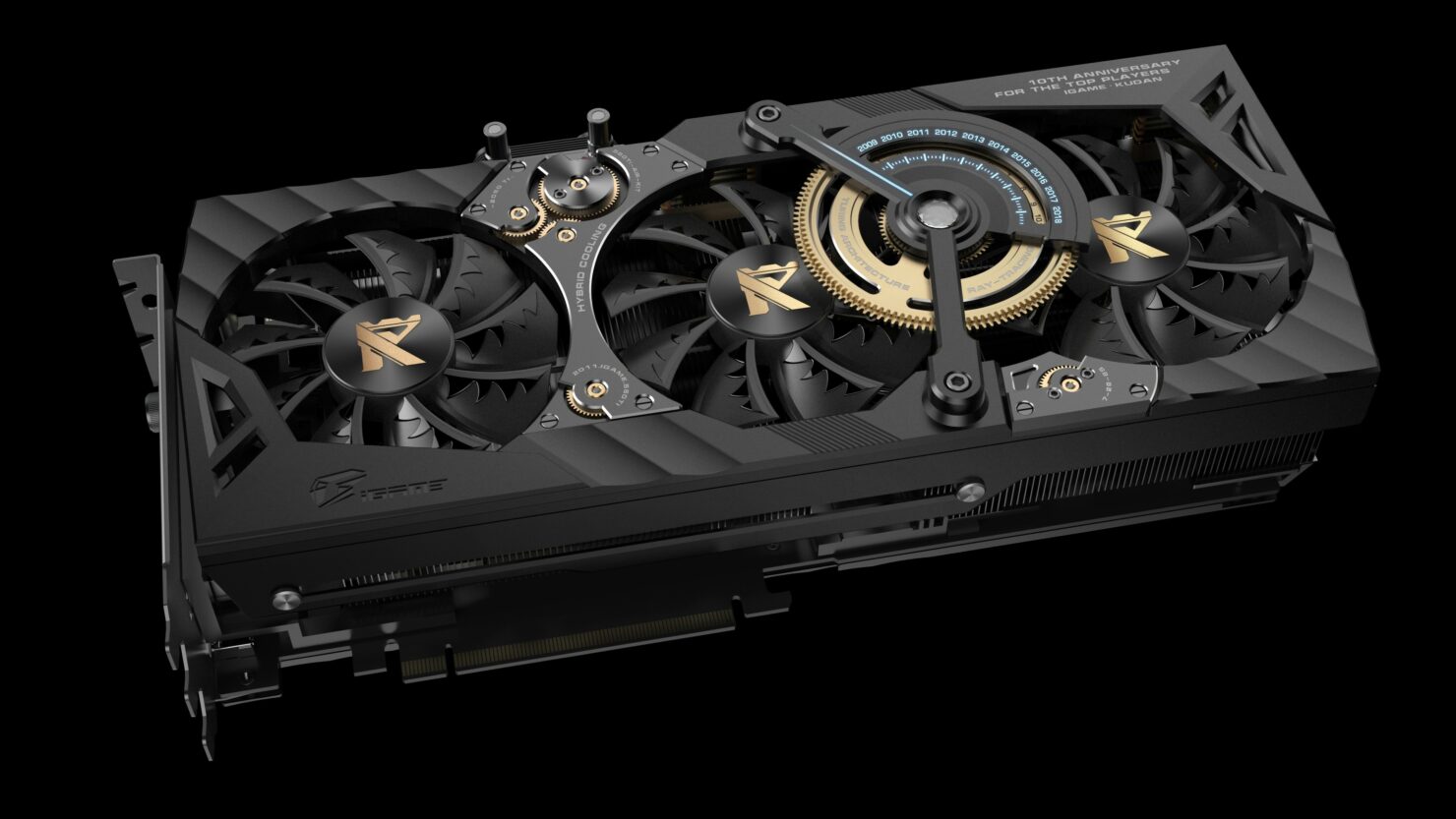 Colorful's flagship graphics card, the iGame GeForce RTX 2080 Ti KUDAN has just been pictured at the CGU 2019 gaming event and it looks monstrous. The KUDAN series has always been the top of the stack in Colorful's lineup and with the RTX 2080 Ti, Colorful has taken their KUDAN design the next level.

Colorful has really gone all out with the new KUDAN design. The previous KUDAN, the GTX 1080 Ti, gave us an impression that Colorful was following a steampunk design but this time, they are fully adopting the theme.

Featuring a triple slot design with a massive shroud and triple fan cooling, the RTX 2080 Ti KUDAN is a pure beast. It has a very retro design with a large gear in the middle that is connected to the outer frame of the shroud. The card seems to include RGB LEDs but even without them, the card looks spectacular.

COLORFUL’s new iGame GeForce RTX 2080 Ti KUDAN will be a limited release with only 1000 units being made.

With a 1800Mhz boost frequency out of the box, the iGame GeForce RTX 2080 Ti KUDAN offers incredible performance with no manual overclocking needed. To further elevate its potential, COLORFUL adorns the card with a custom cooling solution designed only for the KUDAN series of graphics cards.

The new KUDAN hybrid cooling for the RTX 2080 Ti features all new cooling components including a large radiator, custom die-cast backplate featuring a number to signify which of the 1000 limited units the card is.

The iGame GeForce RTX 2080 Ti KUDAN also features RGB lighting for further customization and a new, larger LCD display on the side gives us real-time information about the graphics card.

Display outputs include triple DisplayPorts, a single HDMI and a single USB Type-C (Virtual Link) connector. There's also an OC dial on the back which enables the factory shipped OC BIOS over the standard clock BIOS for an additional boost in performance.

Looking at the card, we can see that it makes use of triple 8 pin connectors and a solid back plate. Here, we can see that the card will have an exclusive number and the one being held by the guy taking the picture is probably the first production of this series. Of course, the card has a really cool robot design etched to the backplate. Additional cooling is provided through an integrated water block which can be used with custom loop solutions. This is a hybrid cooling design so if you have a custom loop installed, you can add more cooling to the graphics card.

The Colorful iGame GeForce RTX 2080 Ti KUDAN is in a league of its own and as such, it would hold a very heavy price tag. This card also celebrates 10 years of the iGame brand and is a very special product for Colorful. With CES 2019 approaches, we can only expect even more grand designs by other manufacturers being revealed.