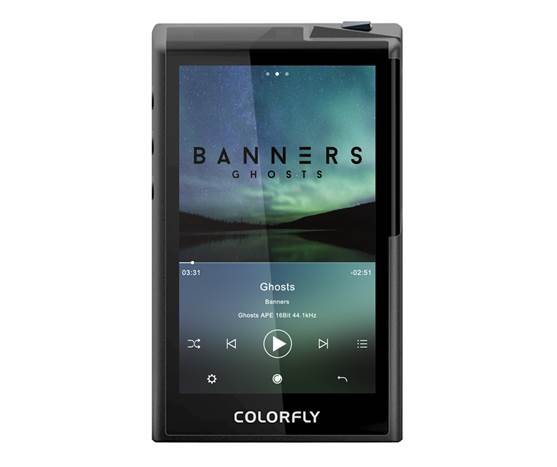 Colorfly which is an independent subsidiary of the Colorful group is proud to announce, the Colorfly Pocket HiFi U8, which is a portable media player that features a 3.97” WVGA IPS touchscreen to control the device and features COLORFLY’s, in-house developed DAC. Two COLORFLY Alpha DACs alongside AMPT and JitterKill II technology allows the COLORFLY Pocket HiFi U8 to bring crisp and lively audio.

Clad in black aluminum with a 3.97" WVGA (800x400) IPS touchscreen 64GB of storage with support for up to 256GB cards as well as supporting formats such as DFF, DSF, WAV, FLAC, WMA, MP3, OGG, APE, ISO, DXD, AAC, ALAC, AIFF, this media player seems pretty solid for something made today. The U8 also has JutterKill II technology which uses an ultra-low phase noise crystal for HiFi Typically -100dBc / Hz @ 10Hz, greatly reducing jitter. For conventional use of 22.5792MHz, 24.576MHz dual crystal, even ultra-low jitter and phase noise - 0.2PS have also affected the data reduction. In order to eliminate jitter and phase noise, we use 45.1584MHz, 49.152MHz high-frequency crystal and also special custom DE-JITTER chip, to achieve "zero jitter" frequency.

The media player also features wireless-N WiFi and Bluetooth 4.0 with a 3300mAh battery which should be enough to keep your music playing through the whole day. Colorfly features something called Advance Memory Playback Technology (AMPT) which is a new generation of HiFi audio processing to optimize the original audio architecture, for the audio data streams directly from the memory and not through the CPU converting it to reduce the latency of the data stream path for stable signal transmission to ensure the sound is clean and to minimize the impact of the OS in audio quality reduction.