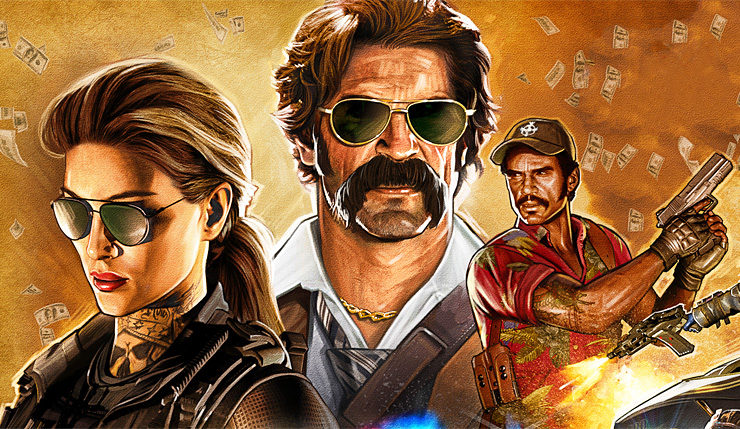 The latest big Call of Duty: Black Ops 4 update drops tomorrow. Operation Grand Heist adds a bundle of new content to all parts of Black Ops 4 – Multiplayer gets a new Specialist and returning party games, Blackout gets an additional location to battle over, and Zombies gets fresh challenge gauntlets and an all-new Perk. And that’s not all – those who purchased the paid season pass get a couple new maps, and, of course, there’s a ton of new cosmetics to earn and buy. Watch the trailer for Operation Grand Heist, below.

Operation Grand Heist welcomes Outrider to the action, featuring new and improved weaponry, she brings the hunt to Black Ops 4. Her new Special Issue Equipment, the Hawk, is a pilotable drone that can be parked at strategic overwatch positions and will automatically tag enemies in its view to help you find and eliminate your prey. Her Sparrow Special Issue Weapon returns with a boost to its precision and power with accurate, explosive-tipped arrows that detonate on impact. Outrider will be instantly unlocked in Multiplayer and Blackout once players complete Tier 1 of the new Operation in the Black Market.

Party Games are returning in Black Ops 4 Multiplayer, starting with One in the Chamber! In this classic game mode, players are given three lives and a pistol with one bullet. Land a perfect shot or melee your opponent to gain another bullet and 100 points. Be mindful of the regularly sweeping UAV, and fight to earn the most points to claim victory. One in the Chamber is the first of several Multiplayer game modes that will make their debut during Operation Grand Heist.

Operation Grand Heist also expands Black Ops 4’s arsenal right off the bat with new weapons to unlock and equip in Multiplayer, including:

Drop into Ghost Town, a Western-themed destination in the southeast desert featuring two new locations inspired by fan-favorite maps. Above ground, saddle up for “Outlaw”, the Western-themed reimagining of Black Ops II’s classic “Standoff”. Then, journey deep into the interconnected caverns below to find “Buried”, an underground Zombies-inspired location with loot to die for and, of course, a new horde of hungry zombies. We’ve also added dozens of new supporting structures throughout the Blackout map, including additional buildings and entirely new locations to drop into for more looting options.

For those die-hard Blackout warriors who’ve already reached Echelon 80, ready up for our brand-new Blackout Prestige System! Rise through the Echelons and Prestige up to 10 times on your way to becoming a Blackout Prestige Master. Players who Prestige in Blackout will unlock unique Prestige icons, Calling Cards, Victory Coins, and more on the journey to the top.

Our new “Death-Con Five” Gauntlet takes center stage at the start of Operation Grand Heist. Take on the undead at the Pentagon, as the Ultimis versions of Richtofen, Dempsey, Takeo, and Nikolai with 30 rounds of unique new challenges to conquer with your friends. Later in the Operation, our “Hellcatraz” Gauntlet will take the Aether story’s four heroes through 30 thrilling new rounds of challenges in “Blood of the Dead”, and an additional community-inspired Gauntlet is also in the works during Operation Grand Heist.

Our first new Perk in Black Ops 4 Zombies also arrives next week on PS4! Wield the Ethereal Razor for devastating melee damage against the undead, and equip and customize Signature Weapons in the Zombies Armory. We’re also ramping up the rewards for Daily Callings for all Zombies players with this Operation. Going forward, players will earn an additional Tier Skip for completing Daily Callings in the Zombies Barracks, giving Zombies players up to two Tier Skips per day.

Phew! That’s a lot of stuff! Still a little confused? Maybe this very-detailed Grand Heist infographic will help you get a handle on all the content coming (click image for full resolution).

Of course, the Black Market will be updated with a new Contraband stream featuring another 100 tiers worth of content to earn. And, as mentioned, if you ponied up for the paid $50 Black Ops Pass, you’re getting two new multiplayer maps – Lockup, which takes place in and around a police station, and Casino, which brings the fight to a classy Monaco resort. Oh, and the infamous space gorilla Cosmic Silverback is now playable in Blackout mode.

Call of Duty: Black Ops 4 is available now on PC, Xbox One, and PS4. Operation Grand Heist kicks off tomorrow, with new stuff dropping every day for the first week. As always, new content hits the PS4 first, with PC and Xbox One players having to wait an extra week.