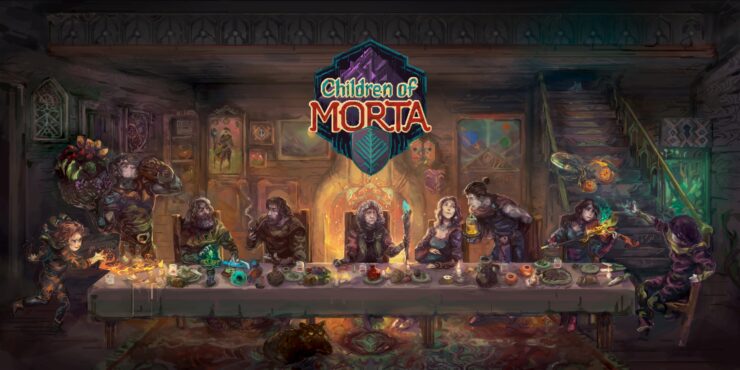 Children of Morta, by Dead Mage, is another good looking Kickstarter game that surpassed its goal. Now, what looks to set Children of Morta apart from quite a few others is that this is looking like it's going to get released - very soon for that matter - and by all accounts, it's a great game already. On the Steam page, all twenty-seven reviews from Kickstarter backers are positive. A small sample, but telling, when reviews are along the lines of this by user "Mr JC Denton in Da Fresh" (was that meant to be flesh?):

Children of Morta is basically still in an alpha state with only 3 characters playable, but I already love it. The art is lovely, the design of the characters and monsters interesting, the gameplay is rather smooth and easy to get accustomed to. If you have played games like Diablo, then you wouldn't have much of a problem getting into Children of Morta.

Most importantly, this game has a lot of heart. Every time you go home, you'll see the family going about their business, each one doing something that is a perfect representation of the character and their "class". I look forward to see what else the devs have in store for the game and hopefully, they don't disappoint. If all goes well, this might even become one of the newer Kickstarter success stories.

Of course, you should always take any and every review with a pinch of salt, they're subjective. Now here's an unusual thing the industry has seemingly forgotten about, there used to be this thing called a Demo. It was a section of a game, given away to people for free, allowing them to see if a game was good or not - or at least if it was for them. Seemingly ignored by the industry who are afraid of losing sales of their half-baked, unfinished tosh (Anthem). Dead Mage is confident. So confident that you can now download a time-limited demo of Children of Morta and it's up for the next 72 hours.

Having seen a fair bit of gameplay footage on YouTube, I can honestly say it looks like an incredibly entertaining game. Still, if the offer is there to get hands-on and try it out before it's released, I'm going to take that offer and see for myself just how good the game is. I recommend you all do the same.

As for what Children of Morta is all about, have a read:

Children of Morta sets its story in a distant land but copes with themes closer to our daily lives that one would expect. It is a story of simple emotions we all know so well and value more than sometimes we dare to admit: love and hope, longing and uncertainty, ultimately loss and sacrifice we are willing to make to save the ones we care the most for.

Embark on the adventure of an extraordinary family of heroes. With the Corruption spreading through the land, guardians of the Mountain Morta have to stand up against the ancient evil. But… it’s not a story about saving the universe. It’s a story about a valiant family standing together while the world around them is being devoured by darkness.

I'm always in favour of a game that's confident enough to let you try it, so this is something I'll be playing at least a bit over the next few days.