EA and DICE have announced the Mirror’s Edge Catalyst Collector’s Edition. The Collector’s Edition was made to help foster player’s affinity with the game's heroine, Faith, as she grows up and makes a stand against oppression, represented by a beautiful adult and young Faith real life diorama that stands 14 inches tall. Players can also join Faith’s fight as part of the runner’s group in the city of Glass with temporary tattoos, or go behind-the-scenes to see more about the game’s creation through concept art and an exclusive lithograph. 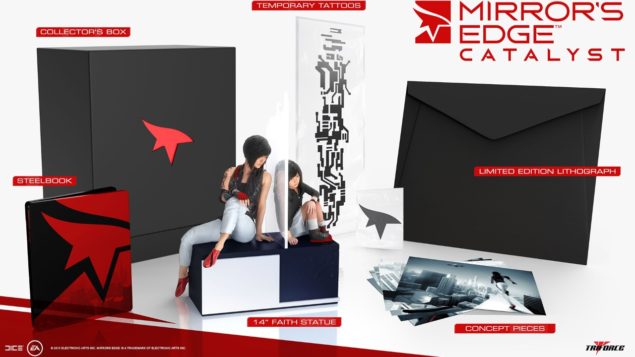 Available in limited quantity for SRP $199.99 worldwide in select retailers, the Mirror’s Edge Collector’s Edition is available for the PlayStation 4, Xbox One and the PC. Players can pre-order a copy starting today at GameStop stores in North America or online, with the other retailers worldwide to be announced soon.

Mirror’s Edge Catalyst immerses players in the origin story of Faith, and her rise from a careless young woman to a heroine who opens the eyes of an entire city. Featuring fluid movement and combat in a massive city where you can run free and explore, Mirror’s Edge Catalyst adds a new level of immersion to action adventure games by putting you in the first person perspective. You are not just watching Faith’s fight for freedom, you will experience it through her eyes.

“When we set out to bring Mirror’s Edge to a new generation of gamers, we knew we wanted to deliver on the potential of the first game – building an iconic heroine in Faith, bringing a beautiful, stylized world to life, and delivering fluid first person action,” says Sara Jansson, Senior Producer at DICE. “In Mirror’s Edge Catalyst, you will get to feel what it’s like to glide across the skyline of the city. You will get to know what it feels like to be a projectile who plows through your opponents. And you will get to experience Faith’s story.”

For players that want to show off their perfect technique or how well they’ve mastered the city can pre-order Mirror’s Edge Catalyst to receive the Combat Runner Kit or Speed Runner Kit*, respectively. The Combat Runner Kit includes unique in-game items including a combat-themed Projection Shader, changing how a player appears in their friend’s game world, a Runner Tag to stand out in the leaderboards, and a unique background to customize a player’s Screen Hacks. The Speed Runner Kit also comes equipped with a Projection Shader, Runner Tag and unique Screen Hack background, but the features are more themed to the speed of their skill.

Mirror’s Edge Catalyst will be available on February 23, 2016, at retail and for digital download on Xbox One, PlayStation 4 computer entertainment system and Origin for PC.