How to Censor Any iOS Notification on iPhone or iPad 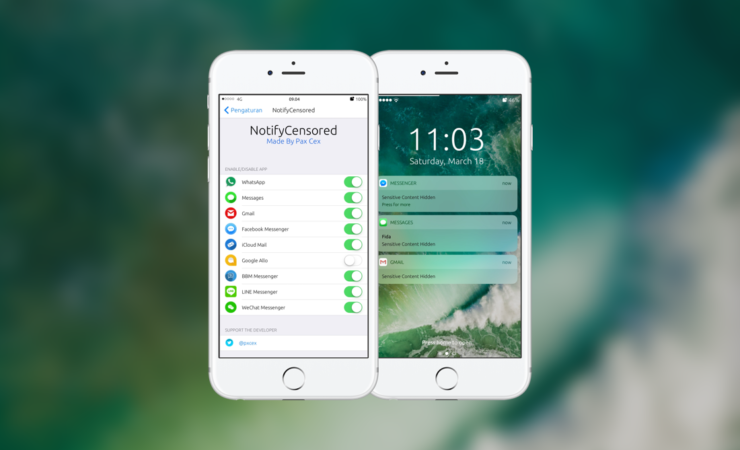 Here's how you can hide or censor any iOS notification on your iPhone or iPad running iOS 9 or iOS 10.

Jailbreak Tweak NotifyCensored Allows You to Censor Any Notification You Like

iOS handles notifications in a very swift manner, and Apple has thrown in a certain amount of control which users can manipulate on a stock level. But sadly enough, if you wish to censor or hide a notification's contents, you cannot do it. That feature is available for Messages only. However, if you are willing to go down the jailbreak route, then a tweak called NotifyCensored might actually interest you.

With the tweak installed from the BigBoss repo in Cydia, you have the option to completely hide the contents of a notification you might receive. For example, if you get a Facebook Messenger notification from someone, the tweak will hide the sender's name and message, only giving you a glimpse of the origin of the notification. Why is this handy, you ask? Well, if you don't want to miss out on any notification while at the same time don't want anyone snooping in your private business, then this tweak is absolutely golden for you.

Simple tweak that allows to censor the notifications message on banner Lockscreen and Notification Center.

Once you have downloaded and installed the tweak, you can simply control everything straight from the Settings app. Simply move the toggle to the ON position for the app for which you want to censor / hide notifications. It's that easy.

It's actually quite sad that Apple does not allow for such a thing on a stock level. Even with the most extreme measures put in place, the only option users do get in stock is turn off notifications completely to keep things as private as possible. Where's the fun in that?

With iOS 11 bound for announcement in June and release set for later this year, there are a lot of features we are looking forward to, with the above one now sitting in our top ten list of things we want to see. There's a possibility Apple might, for once, actually listen to the cries of iOS users.