The Apple Peel 520 was originally released in china and its an external case which does the miraculous task of turning your iPod touch into a make shift iPhone. The case itself includes a circuit board, a SIM Card, A Battery and a Dock Connector all you have to do is put your iPod touch into this beauty and you have an instant iPhone in your hands. Although Apple highly frowned upon this product they were unable to do anything about this when it was in China but now there has been a confirmation that this product may yet yank on Apples chain when it comes to stores in the US for as little as $60!

Go Solar USA has signed a deal with the inventors of this case to sell this case to the public and to add insult to injury Go Solar will EVEN teach customers how to jailbreak their iPhones now that Apple has legalized Jailbreaking of Apple devices (Although it does STILL null your warranty). This tool is very handy for those of you who want to save money, avoid the hassle of a contract and doing a jailbreak. Now all you need is a regular iPod touch and you are ready to show off your makeshift iPhone (If you can hide the fact that its in an external shell of its former self). 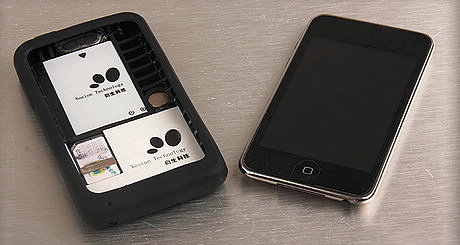 Jonathan Hudis, chairman of the American Bar Association’s Trademarks and Unfair Competition Division, told Bloomberg, “The brothers who invented this Apple Peel probably ran down a list of how many ways could they annoy Steve Jobs. I could not see Apple standing by to let this continue, especially if it results in product shipping into the United States.”