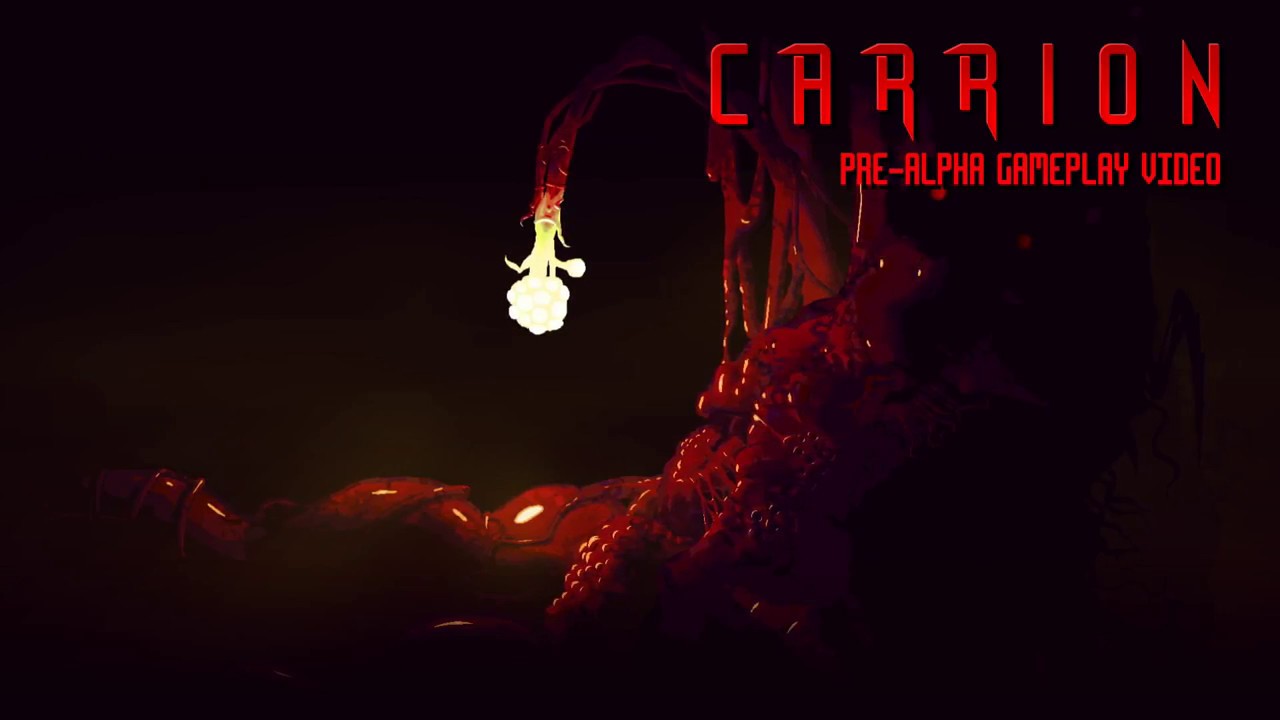 If there’s one thing I’ve come to expect from Devolver Digital, it’s to never expect, well, anything. I certainly didn’t expect to hop into one of the Airstream trailers parked on the Devolver Digital parking lot and be face to face with a massively creepy statue and the creator of Carrion beckoning me to play his game. Granted, I was already one beer and two spicy hot dogs into my post-E3 wrap up celebrations, so it’s hard to tell just how much of what I remember about Carrion isn’t just a meat-fueled fever dream.

Carrion is, as the developers have dubbed it, a ‘reverse horror game’. Rather than running and hiding from the first strange noise in the night, you are the one who knocks (doors down and impales helpless scientists on your fleshly tentacles). Each fleshy person that you grab and consume adds to your ever-growing mass and eventually, you can’t make it through a stage without bumping into the walls and smashing into anything in your way. Think of your Carrion form as a big old noodly Katamari. The controls themselves were really simple to pick up and play: one analog stick for movement, the other to aim your appendages, one button to grab and pull, and another for the special abilities that were unlocked later on in the demo. If the developers want to throw in secret moves to mix up the Carrion experience later on, there are still plenty of other buttons to play around with.

The developers talked briefly about the progression to Carrion despite largely being level based. There are plans for a world map and the ability to revisit levels, although nothing they talked about was finalized quite yet. After all, you’ll constantly be unlocking new abilities for your Eldritch bodies, so why not have creative ways to return to previous levels and unlock doors or otherwise impassable obstacles?

At a quick glance, the pixel art of Carrion is incredibly fluid and full of motion. Your Carrion horror never stays still and instead floats about the level as you control it from one meal to the next in search of new hives to establish throughout. Each time your Carrion grows in density, it bulges out and becomes more and more grotesque.

Carrion isn’t just about becoming a massive, all-encompassing horror and eating everything with a heartbeat that happens to be in your way. Sometimes, environmental puzzles require a more delicate approach. In the brief demo I played, one of the abilities that my Carrion beast could unleash was a sticky web shot that, in addition to immobilizing enemy soldiers, has the added ability to flicking switches that are just barely out of reach of your tentacles. This ability was exclusive to the smaller form of the main characters. At the same time, you’ll see powerful smashing abilities exclusively available once you absorb enough mass. To change sizes, alcoves are strategically located throughout each level and let you deposit or withdraw mass into what I could only imagine was a temperature-controlled meatbank (could you imagine how awful that must smell if left at room temperature?).

Sidescrollers, and especially ones that have Metroid roots in their gameplay loops, are undoubtedly one of my absolute favorite genres to dabble in. When you merge it together with Eldritch horrors and play the role of the beast they whisper about during children's bedtime stories, well, then you certainly have my attention. Carrion was one of my biggest surprises from E3 2019 and I can’t wait to play this reverse horror game when it launches sometime in 2020.