Broadwell M was intro-ed to the market recently and preliminary benchmarks surfaced a while back. However, Sweclockers.com conducted some benchmarks of a normalized Core M Broadwell chip versus a reference Haswell counterpart. Intel has boasted IPC gains of 5% but on the few tests that they conducted IPC improvement was somewhere around 3%. 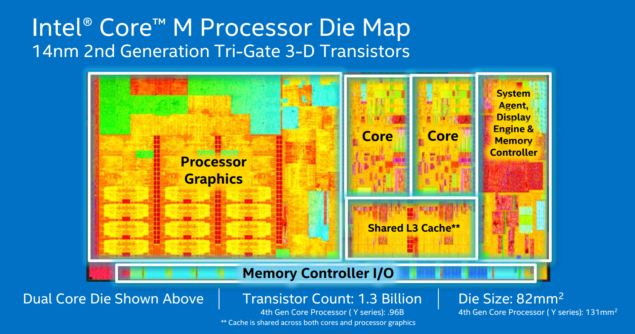 We are slowly reaching performance stagnation in the CPU Industry, where entire node jumps and new architectures are required to get an increased IPC. This is why that most chip designers are switching to a motto of reducing power consumption. I recently read a pretty interesting research paper from MIT which talked about drastically removing power consumption by allowing the processor to be wrong on occasion (think 1+1 = 3) and choosing 99.9% accuracy instead of the ideal 100%. In many cases the difference wont actually matter, practically speaking, but it makes quite the difference in power consumption. The reason for this is that the more voltage is supplied to a transistor, the more accurate it becomes.

The first ultrabook to support Core M is the Lenovo Yoga 3 Pro and you might remember the preliminary benchmarks I posted which showed not-really-impressive results. Well, thanks to Sweclockers we now have an IPC comparison as well. Keep in mind however that these folks only tested two suites. While I am sure Intel exaggerates as much as any other company, I am also sure that you would get the boasted 5% in some scenarios that were not tested here. These include cryptography and visualization among other things. However, the benches that were done here are usually representative of general performance as opposed to specific performance and are therefore more relevant to the average user. Intel Core M 5Y70 that house in Lenovo Yoga 3 Pro comes with 1.1 GHz base frequency, and turbo boosts to 2.6GHz(both cores). The Haswell tablet that was used for comparison was the Surface Pro 2 with the Core i5-4200U which was locked at 2.296 Ghz.

As you can see the difference between 'normalized' Core M and Haswell is approximately 3%. Since we are measuring clock for clock, we will ignore the higher clock performance. However, there is one thing Sweclockers did not measure and that is the Performance Per Clock Per Watt. Broadwell utilizes the second generation of the FIVR technology (Fully Integrated Voltage Regulator) which is supposed to be phased out in mainstream desktop chips with Skylake. Core M delivers better efficiency through non-linear Droop control and dual FIVR LVR modes. Intel has also used a new technique to relocate inductors from the main die to integrate modules under the die using 3D Layering (3DL PCB) which saves power. All these technologies add up to deliver lower power output on Broadwell generation of processors including the new power gating and boost algorithms which maximize frequency output while conserving clock speeds for power when under idle mode.

To measure the performance per clock per watt, we need to know the exact power consumption of the actual processor, but since we cannot do that now, Intel's listed TDP would have to suffice. Do note that Intel does not list SDP. It lists TDP. Which means that this is the maximum TDP for a chip, or so Intel states. However, even if the actual TDP is slightly higher, since we will be taking the official TDP of Haswell as well, the integrity of this calculation should not be compromised (relatively speaking the values will hold true since any bias (if at all) from Intel's side will be present in both cases, Ceteris Paribus basically). For Performance Per Clock Per Watt we will not take the normalized Core M since that was artificially locked and could result in the chip exceeding Intel's TDP specifications. We take the general results.

Taking Haswell as base value, we get a Performance Per Clock Per Watt increase of  342%

Well there you go, at this particular configuration the Broadwell Architecture is approximately 3 times better than Haswell. However, there is a logical fallacy in this particular calculation. I am sure our more avid readers have it figured out already. This calculation assume that performance remains the same when clocks are added, ie. a uniform increase. Thats the incorrect assumption number uno. Secondly, it assumes that as the power consumption remains constant as clocks increase which is incorrect too. The only way you can find out the real value is by running this calculation on the entire range of clocks and physically recording the TDP. However, for the purposes of this article this example suffices. Either way we are looking at an architecture that is at least twice as efficient as its predecessor and a good step to keep the Industry from stagnating completely. That's all folks.