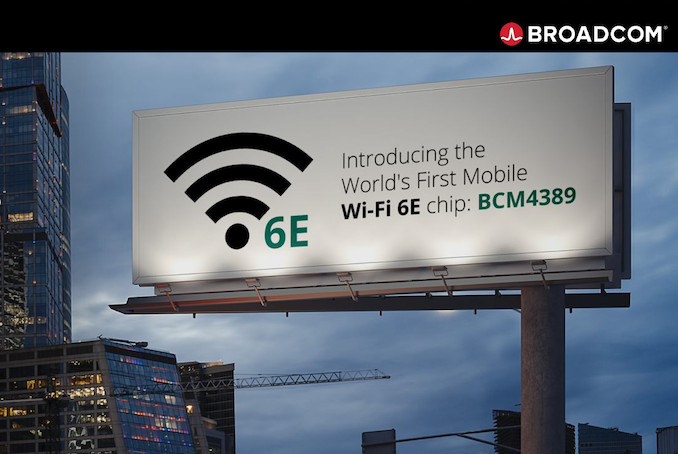 The WiFi Alliance announced the new WiFi 6E terminology for 802.11ax operation in the 6 GHz band last month. At CES 2020, Broadcom has published a number of WiFi 6E access point solutions, Broadcom is announcing the BCM4389 client WiFi 6E chipset. Wh should see this new chipset in the next generation of high-end smartphones, the advantages of WiFi 6E offers lower latency, higher throughput, and the availability of more number of 160 Mhz channels.

The BCM4389 chipset builds upon Broadcom's success with the BCM4375, which is the currently leading client WiFi 6 chipset in the smartphone market

This newer chipset offers not only to support for the new 6 GHz support with the tri-band simultaneous operation and 160 MHz channel support, but the BCM4389 also provides support for additional power efficiency this is due to 16 nm process technology and architectural improvements. The 16 nm node is in start contrast to the BCM4375, which is built upon a 28 nm node.

The improvement between the newer BCM4389 compared to the BCM4375 is that the BCM4375 is built on a 28 nm chipset with 2x2 2.4 GHz and 2x2 5 GHz, which doesn't support the newer 6 GHz band. The scanning radio accounts for the additional radio chain.

The newer chipset also offers support for Bluetooth 5.0 functionality, which has received a boost with MIMO support. Broadcom claims that the new implementation can not only reduce pairing time by a factor of 2 but also help alleviate glitching issues when connected to WiFi at the same time (when compared to BCM4375). In addition to MIMO helping decrease pairing time, MIMO support also works with implicit beamforming ensuring that older Bluetooth devices also benefit.

Many vendors, such as Broadcom and Qualcomm, have been finding mostly straightforward ways to implement 6 GHz support to their existing 802.11ax product lines, Broadcom seems to be taking the lead with public announcements, and products that feature support for WiFi 6E chipset. Qualcomm has not announced publicly announced any WiFi 6E products. Thanks to silicon availability, device vendors should be able to quickly push out WiFi 6E support in their products, once the FCC has cleared the chipset.

For consumers, the power efficiency improvements along with tri-band simultaneous operation should be some very welcoming news.