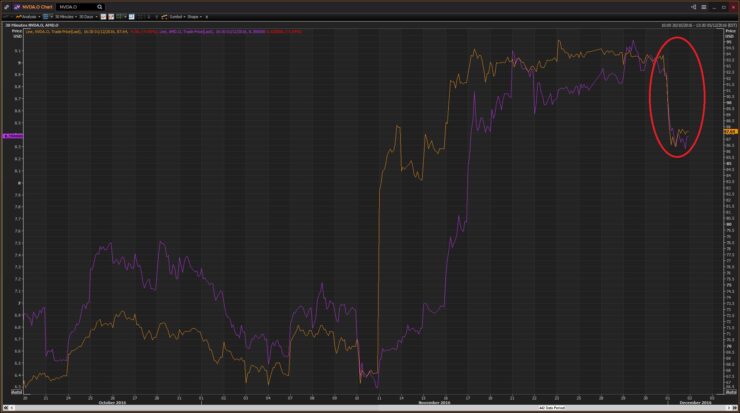 Technology stocks have had a fantastic year. Not all of them of course but many of the companies we follow here have seen stellar growth in the last 52 weeks. That started changing significantly today as a broad selloff in the technology sector has hit tech companies of all kinds, but before we dive into some detail, let’s take a look at some of the big movers which were all trading at significantly above 100 day average daily volume.

Keep in mind that while some of these drops look somewhat dramatic, many of these companies are still significantly up for the year with the chart above showing just the last month for two of our most beloved companies to discuss here.

Looking at the S&P 500 and Dow, it’s pretty clear that there is a big sector rotation game going on. Tech is down with people piling into financial, energy and industrial stocks. In addition to the below, the Nasdaq index is also down 1.4%. There are a few things which have occurred in the last day or so which may be driving some of these changes.

OPEC yesterday agreed its first production cut since 2008 with Saudi Arabia surprisingly agreeing to take a fairly large hit in their barrels per day numbers. OPEC has struggled to retain as much power over oil prices as it has in years gone by. US oil output has risen significantly in recent years albeit with higher extraction costs than much of the Middle East. The Saudi’s have been against cutting production in recent years as they were hoping for the low price of oil to drive out of business some of these producers with higher extraction costs. Ultimately that effort has had mixed results, US output has somewhat slowed, but probably not to the level that was desired and although the price of oil has risen since the lows we’ve seen in recent years, it still remains too low for the cartel's liking.

Add onto that the fact that for many OPEC members, their governments are not able to balance the books with the price of oil where it is now and it’s clear that for the organisation, those arguing for a cut in production have won the day. Even Russia (which is not a member of OPEC but agreed earlier this year to cooperate with it) is joining in.  The devil is in the detail of course and OPEC members regularly breach their production targets, regardless, this is usually tinkering at the edges and chances are that output will be restricted from what it is today.

Tech isn’t the only sector we are seeing hit in this sense. As we looked at recently in our Trumponomics 101 article, bond yields have also jumped in recent times as the market shifted its focus to equities after the shock Trump election victory and years of inflationary borrowing and spending to come. Since then, yields have continued to soar with US 10 year T-Notes hitting 2.468%. Of course this will likely mean that fresh bond issues by companies we follow will also need higher rates of interest offered to attract investors.

About $1tn piled out of the fixed income market in the wake of the Trump win, that has continued and we’ve now seen an additional $1tn leave the market which is obviously what has put upward pressure on yields. With this powering into the equity market, it has of course pushed stocks up across numerous sectors while the money searched for the places where investors thought it would give the best return. It’s unclear now whether this is end of year profit taking after a stellar tech run or people thinking that the tech boom may be slowing down, particularly with a looming Trump presidency where significant government spending will go to infrastructure companies. 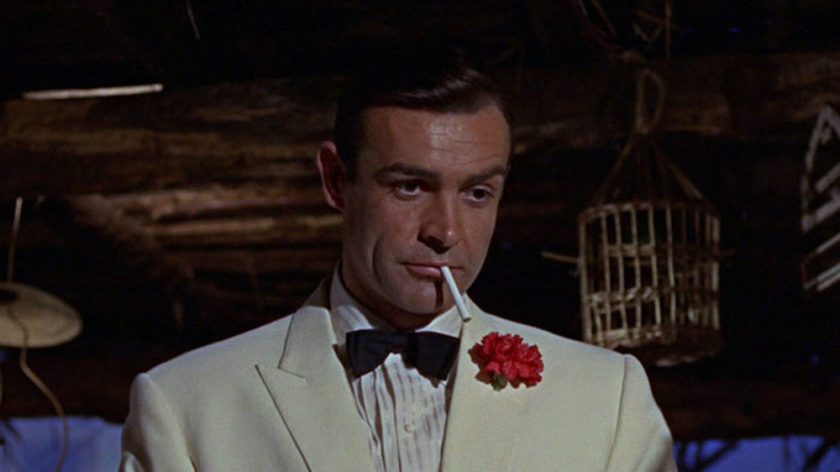 It’s no secret that the Republicans have been against the financial regulation known as Dodd-Frank. This was conceived as a way to protect Main Street from the excesses of Wall Street and make sure that the US taxpayer never had to bail the sector out again, but it placed heavy restrictions on the financial services sector. Since Trump won the US election, Wall Street banks stock prices have also done well on the assumption the Dodd-Frank is about to be scrapped or at least heavily curtailed to make it easier for the financial services sector to make money. Since the 8th of November, we can see:

It’s not just US firms who are benefitting either. Large international banks with significant exposure to the US have also done well with Nomura, Deutsche, UBS, Barclays and others also getting in on the expected Wall Street/banking bonanza to come.

The above, combined with the likely increases to costs of technology as many US firms potentially look to shift their production lines back onto US soil where they will undoubtedly need to pay higher wages along with other costs (such as environmental regulation compliance etc) or potentially face lower sales anyway if a Trump administration makes good on its promise of import tariffs for products US companies produce on foreign soil is likely leading investors to think that the era of huge profits from tech firms is coming to an end and with increased revenue from energy and infrastructure as well as financials, it’s clear to see where the future lies in terms of greatest return for many.

This isn’t to say that Tech is suddenly going to collapse. As we’ve also mentioned, it’s the sector most likely to take advantage of a repatriation holiday for corporate earnings. Deal making may go up with all of this cash sloshing around Silicon Valley, whether out of genuine interest in purchasing startups for their technology or as acqui-hires. Also keep in mind that tech may now look to return more capital to shareholders if they genuinely can’t find anything better to do with it so we may be looking at a transition to a more stable growth with better dividends akin to other blue chip stocks rather than just stock appreciation as the primary method of compensating shareholders. There is only so much money in the financial system looking for a return. As the global economy closes out a year of shocks (Brexit and the Trump victory foremost among them), it’s clearly aggressively searching for whatever will give the greatest return in the new normal.

Thankfully this return to inflation which is expected in the coming years for some countries will allow interest rates to return to more normal levels from unprecedented historical lows. In many ways, this can’t happen quickly enough. Many markets are still in the midst of the 2nd longest bull run in history having started in 2009 following on from the sub-prime crisis. A correction is coming and when it does, interest rates will need to be higher than they are now to allow monetary policy to be loosened when it hits and soften the landing of the next global downturn. We know there’s a debt black hole in China, perhaps that will be what triggers the next downturn or something else entirely that blindsides us. Whatever it is, preparation is needed.