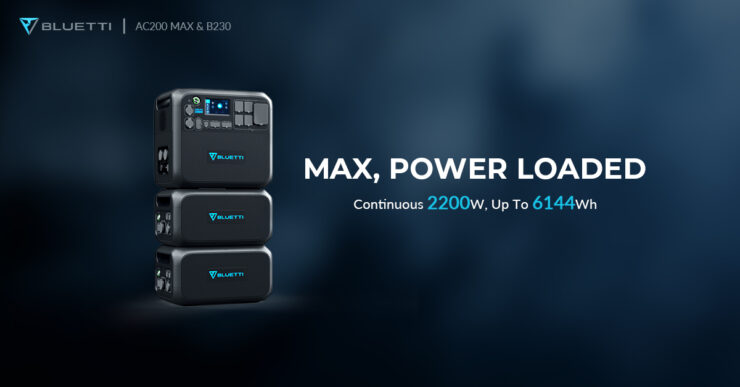 The game changing BLUETTI AC200 power station was initially released to the public on July 1st, 2020. After pulling in a staggering $6.7M US dollars on the crowdfunding platform Indiegogo and having sold tens of thousands of units over the past year, BLUETTI has continued working on making major improvements to their power stations and by listening to their customers. Today, they are extremely happy to announce the culmination of this work over the past year.

For the first time ever, BLUETTI will be launching 4 new models at the same time: The portable power stations BLUETTI AC200 MAX, the BLUETTI AC300, and the expandable battery modules BLUETTI B230 & BLUETTI B300. After hinting of something big coming in their official Facebook group originally on June 23rd, the company has now unveiled a whole picture of these new power monsters today! 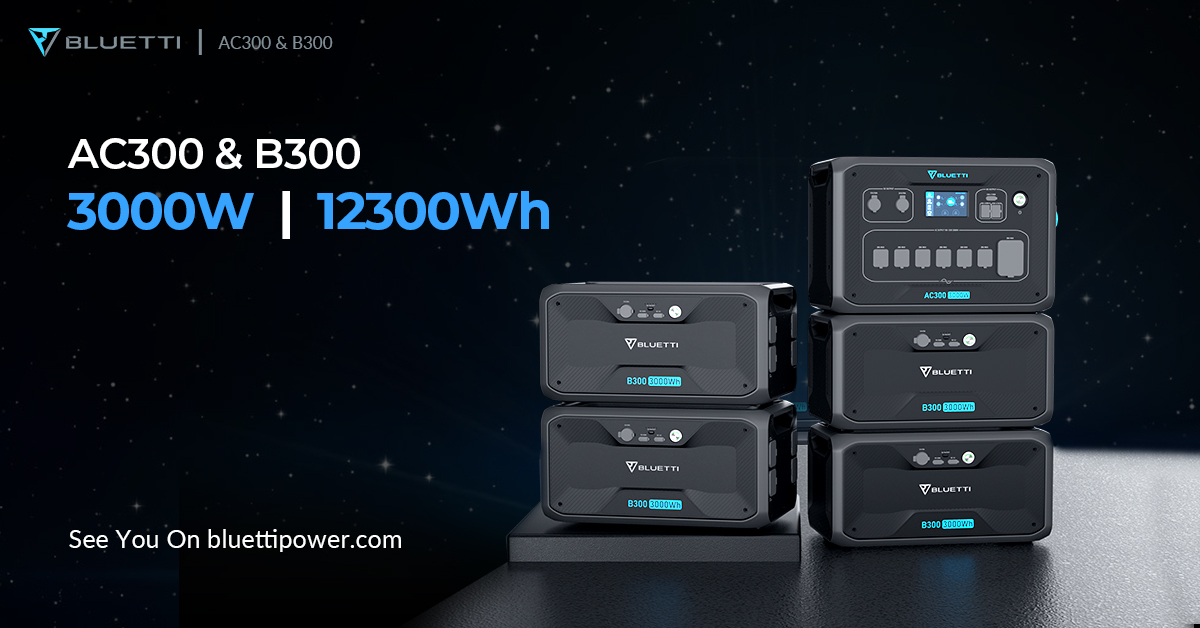 BLUETTI’s first 3,000W home power center - The EP500 Pro - has caused a huge sensation with its premiere debut on Kickstarter. Now, shortly after the end of the EP500 crowdfunding, BLUETTI is pleased to release their first, much more flexible, modular 3kW flagship model: Meet the AC300. 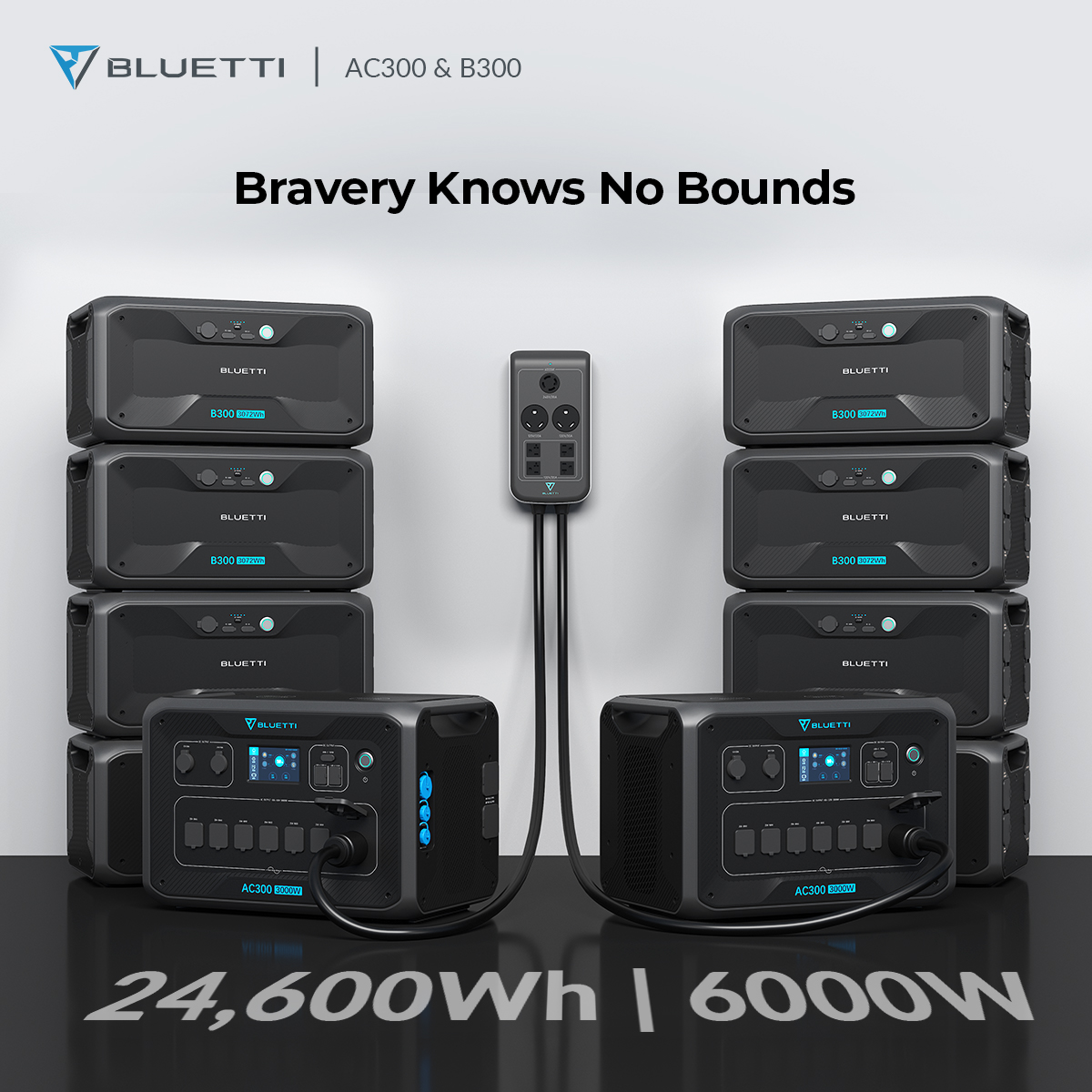 These four new arrivals follow BLUETTI’s classic design language of their AC series: A delicate, rectangular power box with two solid lifting handles on the top of each side, and the AC300 is no exception. Yet surprisingly, the AC300 does NOT come with an internal battery pack. Its modular design allows you to select B300 battery module to mate with the AC300. This new modular design is a bold move for BLUETTI, but for a heavy-duty unit like BLUETTI AC300, this design not only significantly reduces the weight of each single unit but also allows users to replace any or all batteries, if necessary, in the future. And since the system is modular, you can carry each module individually. Whether it is up the stairs to your bedroom, or outside to your van, you will be protecting your back from heavy lifting by being able to carry your modular BLUETTI system, module by module, instead of everything at once. 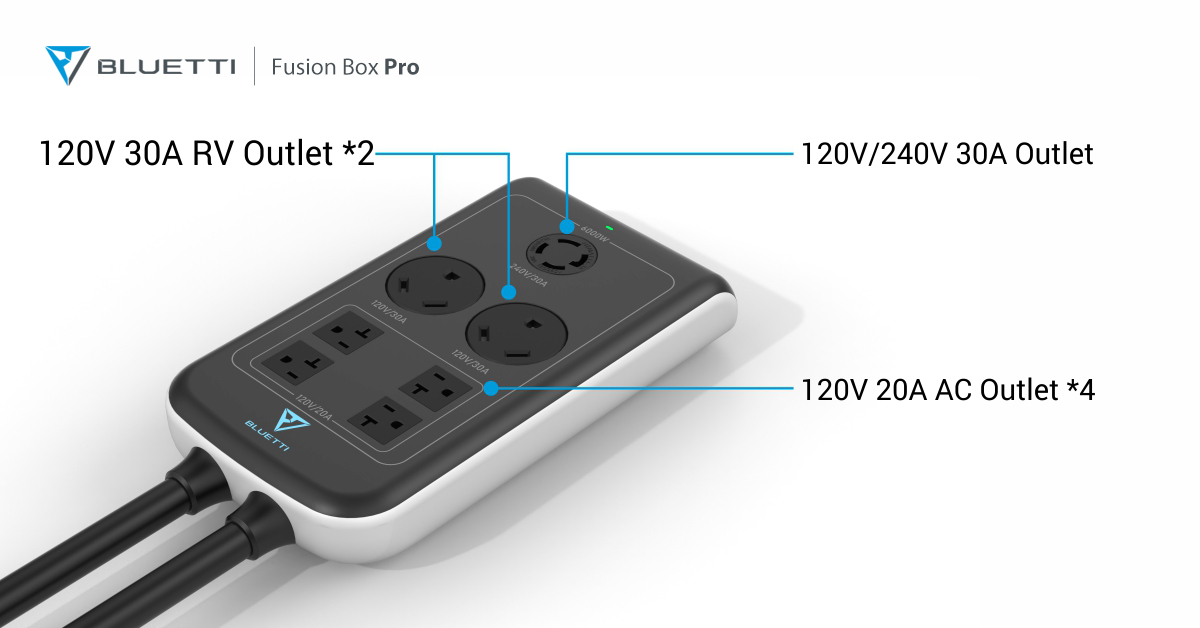 Under the hood, there is a 3,000W pure sine wave inverter and an MPPT controller which can support up to a staggering 2,400W of solar charging. A single AC300 supports up to four battery packs for a whopping total of 12.3kWh of capacity. Do you still feel like that’s not enough power? With BLUETTI’s Fusion Box Pro, you can connect two AC300s to double the power and capacity at the same time! Boast up to 6,000W of continuous power, 24.6kWh capacity in total, and 10.4kW of groundbreaking solar input capability! This setup can be an emergency power center and run your home essentials for over a week, or with enough solar panels, you can even run your entire whole house, off-grid… indefinitely.

With the new BLUETTI AC200 MAX, despite looking identical to the AC200P, there have been many changes and improvements that make the AC200 MAX an attractive solar generator in its own right. 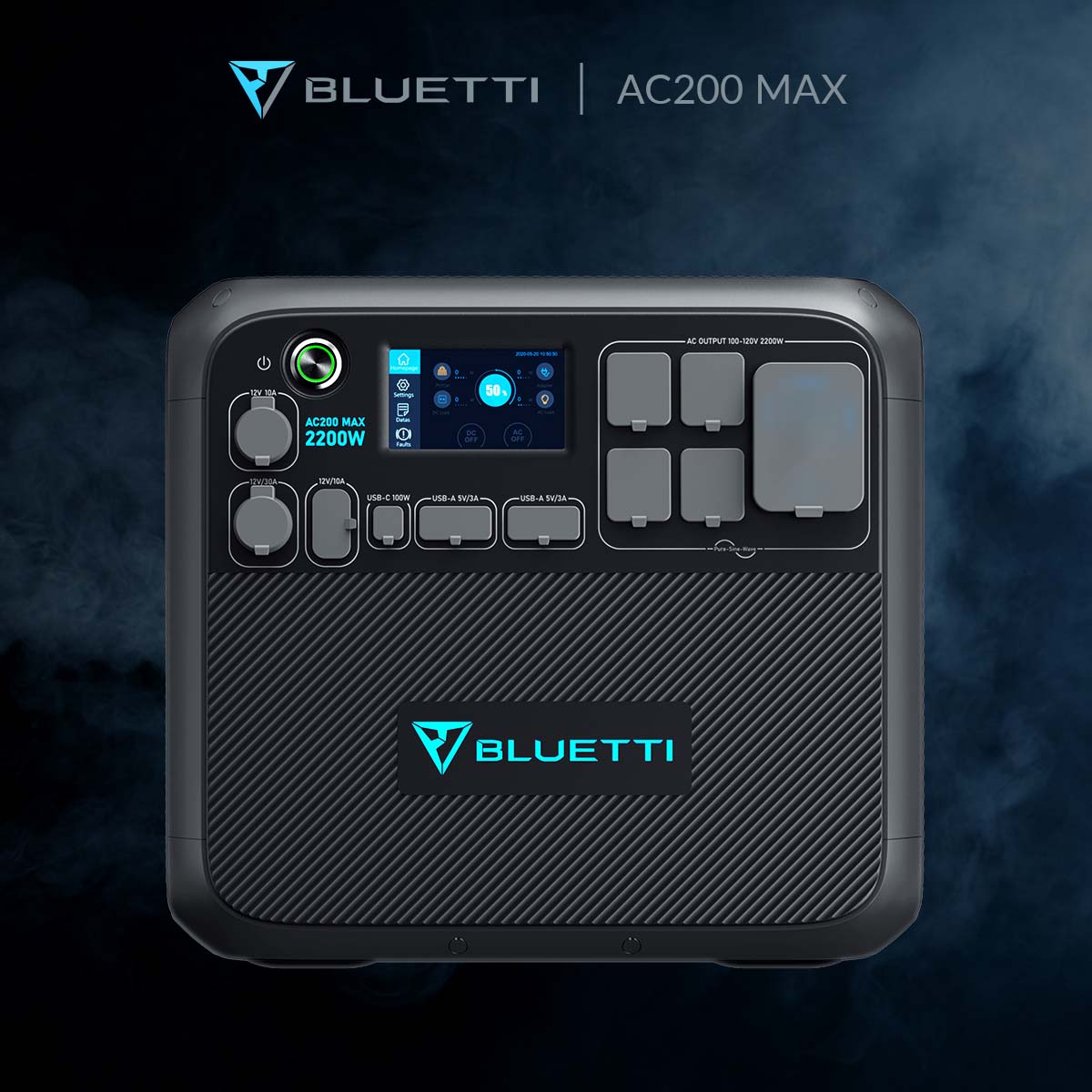 For I/O capability, the AC200 MAX features higher continuous output power at 2,200W from its pure sine wave inverter, a 100W PD3.0 USB-C port, an upgraded MPPT controller which now handles up to 900W of solar input and a built-in 30A NEMA TT-30 outlet designed especially for the RV crowds. And most importantly of all after feedback and listening to our customers, finally, the BLUETTI AC200 MAX supports Bluetooth connection and can be controlled wirelessly with the new BLUETTI Smartphone App (iOS & Android). And it too, also supports expandable battery packs! 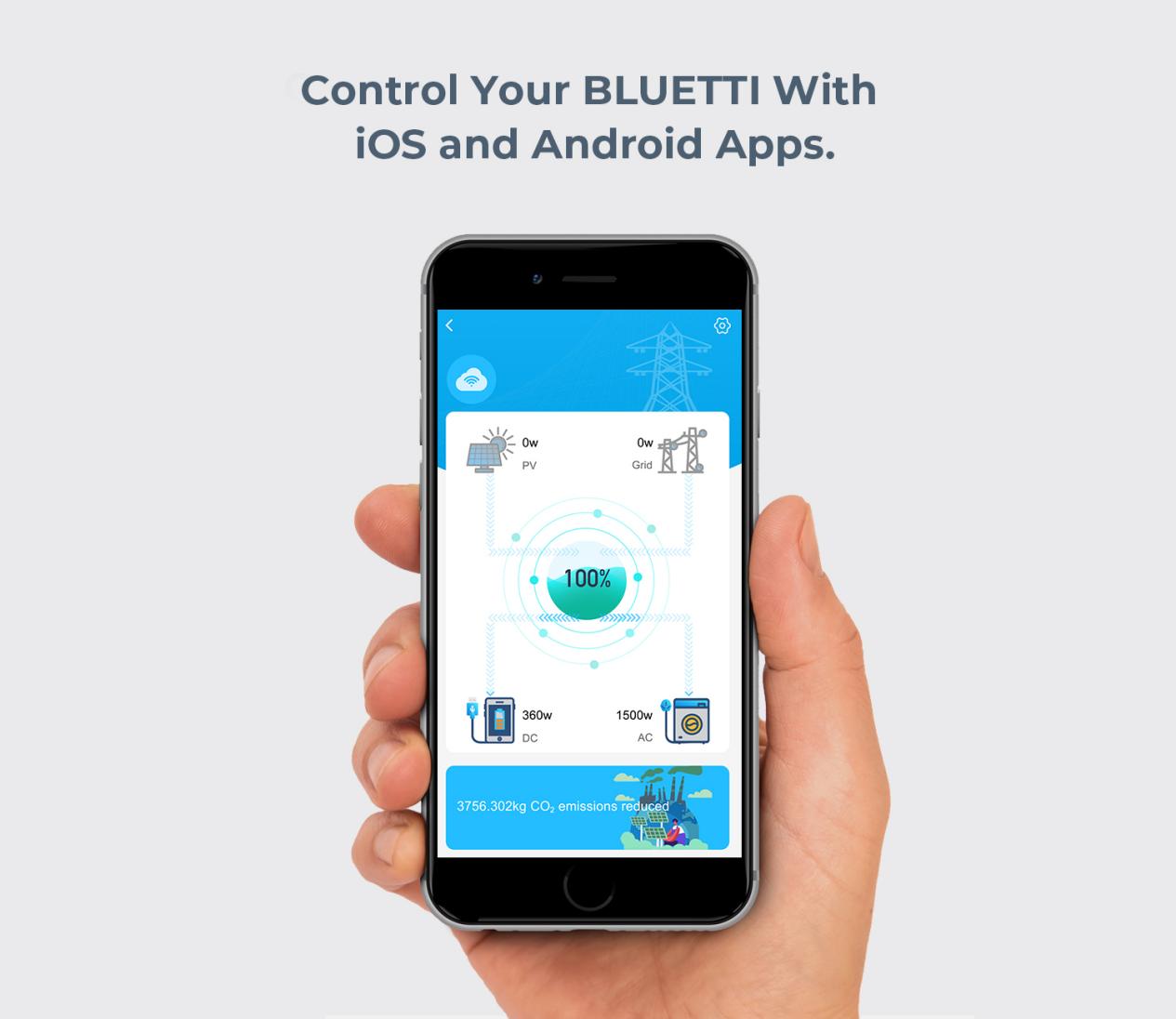 The AC200 MAX supports up to two additional battery packs, using either the BLUETTI B230 or B300. With two BLUETTI B300 you can easily expand your AC200 MAX to a massive 8192Wh of capacity to run all of your essential needs at home or on-the-go for hours, days, or even more than a week!

According to the information released by BLUETTI, they will be launching all of these exciting models on their official website www.bluettipower.com. No crowdfunding or prolonged waiting this time!

Orders for the AC200 MAX and B230 battery modules will begin in late August 2021 and will be delivered as quickly as three weeks. The BLUETTI AC300 and B300 will arrive later in September 2021 and will also be delivered as quickly as two weeks. You may join their official Facebook Launch Group for more information and subscribe to their emails on their product pages for super early bird pricing when the new models are available.

At the end of BLUETTI’s hinting via their social media outlets, the company showed us a sneak peak of some-kind “product roadmap.”. BLUETTI listed the AC200 MAX as the “Challenger”, the BLUETTI AC300 as the “Dominator”, and a mysterious “APEX” to be released in the end of 2021. This may indicate that the company is working on another even more powerful, classified model in the lab. They have not said anything about this “APEX” model yet. So, let us wait and see! 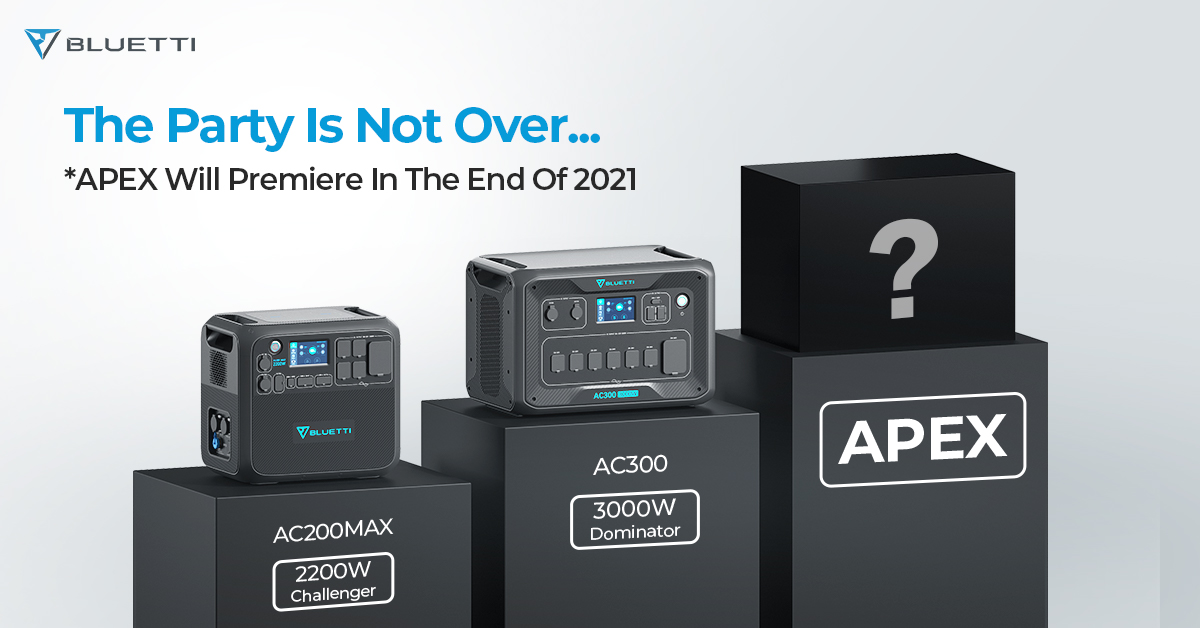