After the Fallout 4 leaks, it would have been a little strange not to have any Black Ops 3 leak, given that the game is coming out tomorrow on all platforms. Finally, Reddit user EzzOmen posted a lot of info and screenshots on the game. 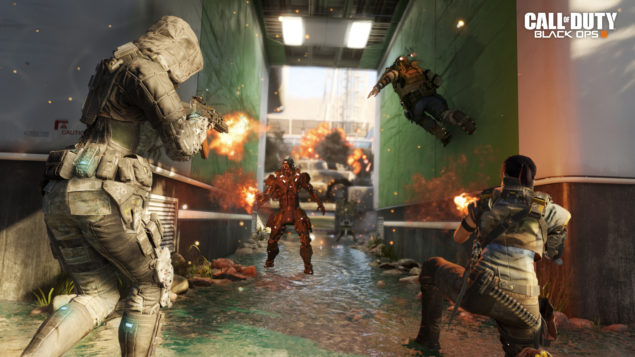 First of all, he began his Black Ops 3 leak with a Q&A on some hot topics:

Has Lobby Leaderboard Returned?!
No, as far as i am aware, i have played 10+ online games as of time of writing and haven't seen it.

Hellstorm Missile, is it OP?! Not as bad as it was during the beta, but for me, it feels more relevant than the Black Ops II one, i average 2-3 kills with it per use.

TTK?! its a good DLC for Destiny ( ͡° ͜ʖ ͡°). Nah, Time-To-Kill in Black Ops 3 feels good, most kills i get i can hear a few hitmarkers before, and most deaths i get a few flinch shots before death, had a few turn-around kills where i got lucky, and a few almost instant melts from both ends.

Black Hat?! I've used Black Hat in Local basically boosting myself a few scorestreaks on a secondary controller. Feels a lot more fair than it used to in the Beta, still think that it is a bit more powerful than some may want, but the modifications done to it will make it fair to use in a real situation, icant imagine it being as easy to hack a mothership in a 6v6 Public game as it is in a 1v1 local game with no enemies.

CAMPAIGN?! 11 Campaign missions in the game, it took me about 45 minutes to finish the first one on veteran difficulty and i would consider myself an above average player, especially for campaign as i love to hunt trophies and achievements for games so harder difficulties has become the norm for me. i think the 12-15 hours may be a stretch but it feels like Black Ops 3 will be a longer Call of Duty than others. Campaign Collectables return and Accolades which allow you to level up and earn rewards for MP and Campaign.

He also shared screenshot galleries for pretty much every aspect of the game, from equipment to modes to menus and customization.

And that's the end of this massive Black Ops 3 leak. NVIDIA released a Game Ready Driver yesterday, by the way; moreover, the PC version of the game has been recently confirmed to feature both mapping and modding, although these tools will be available in March and even then, only in alpha state.

Treyarch's Cesar Stastny, Director of Development, also shared more info on the PC version yesterday via Twitter, such as the FOV:

He also confirmed that the PC version will enjoy 100% dedicated servers for public match and arena.

@wAnxTa PC is 100% dedicated servers for public match and arena.

As for technical details, Stastny said that GPU power is more important with this engine, the performance has been improved since the beta and SLI should be nicely supported in Black Ops 3.

@fresh_muffins GPU power is more important in this engine.

Finally, the team at Treyarch has managed to lower input lag in this latest edition when compared to Black Ops 2.

@AlijaMehmedovic We now have lower input lag than in BO2.

Are you buying Call of Duty: Black Ops 3? Let us know in the comments.