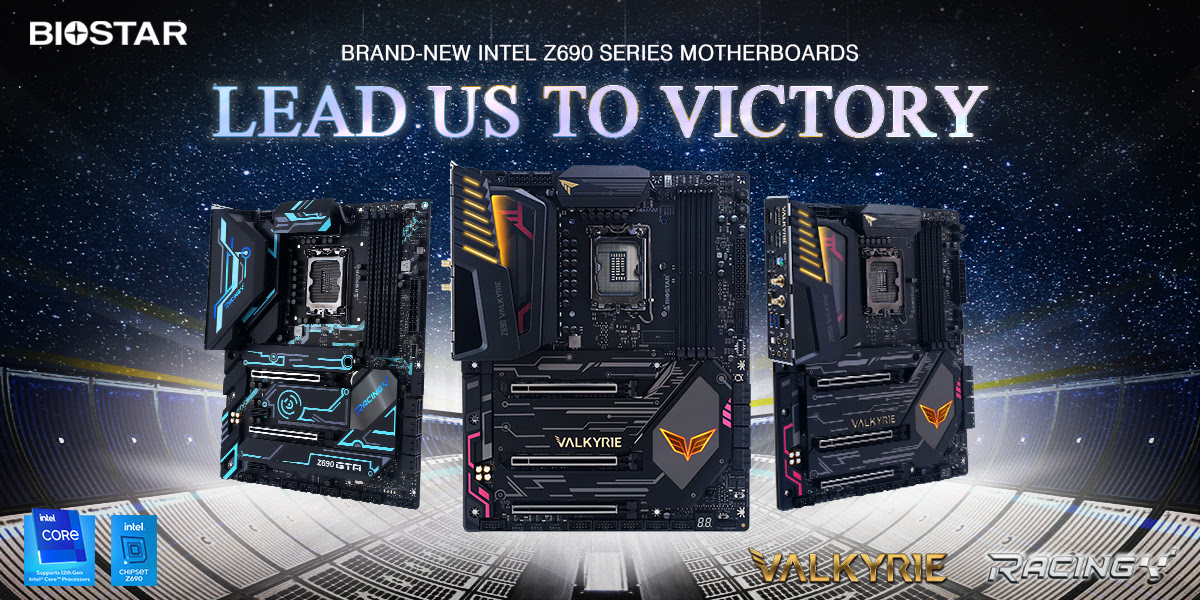 BIOSTAR has updated three of their ATX motherboard series for the new Intel Z690 generation. The three ATX motherboard series are the Z690 and Z690A VALKYRIE, and also their RACING Z690GTA motherboards. With the three new motherboards, BIOSTAR hopes to speak to those gamers wishing to play the best AAA games, content creators pushing the envelopes of what they can accomplish with their system, as well as enthusiasts wanting the absolute best from their hardware.

The VALKYRIE line from BIOSTAR, both the Z690 and Z690A models, are dubbed as BIOSTAR's flagship Intel Alder Lake motherboards, featuring top-of-the-line technology from the company. Utilizing PCIe 5.0 tech and a "20-phase power design that provides continuous stable power across all components enhancing the performance and durability of the system greatly."

BIOSTAR has also equipped the new VALKYRIE motherboards with DDR5 compatibility, ushering in new options for next-gen memory. The company has also chosen a new design with the new VALKYRIE motherboards, adorning the motherboard in "signature gold and pink battle lines" and an armor-style look. BIOSTAR has already fashioned their PCB cover in the same armored look, and offers their in-house designed heat dissipation architecture with their "proprietary fins heat sink," allowing for efficient cooling using its "full-copper base and metal backplate."

The new RACING Z690GTA motherboard by BIOSTAR is more suited towards the gaming and content creation market, with streamlined functionality and visually appetizing features. It features a "17-phase power design" and also adds BIOSTAR'S VIVID LED DJ, RGB SYNC, and LED ROCK ZONE applications to provide plenty of functionality to the motherboard. BIOSTAR is pushing the product to be a "jack of all trades" among competing motherboards.

Style, grace, and bleeding-edge functionality is the name of the game for BIOSTAR’s new Intel Z690 series motherboards. Consumers who want nothing but the very best can rest assured that their favorite brand has made some amazing new products ready to arm their battle stations with raw power, lasting durability that brings victory on the battlefield.

To find out more about BIOSTAR's new motherboards, click the below links to take you to each product's individual page for more details.