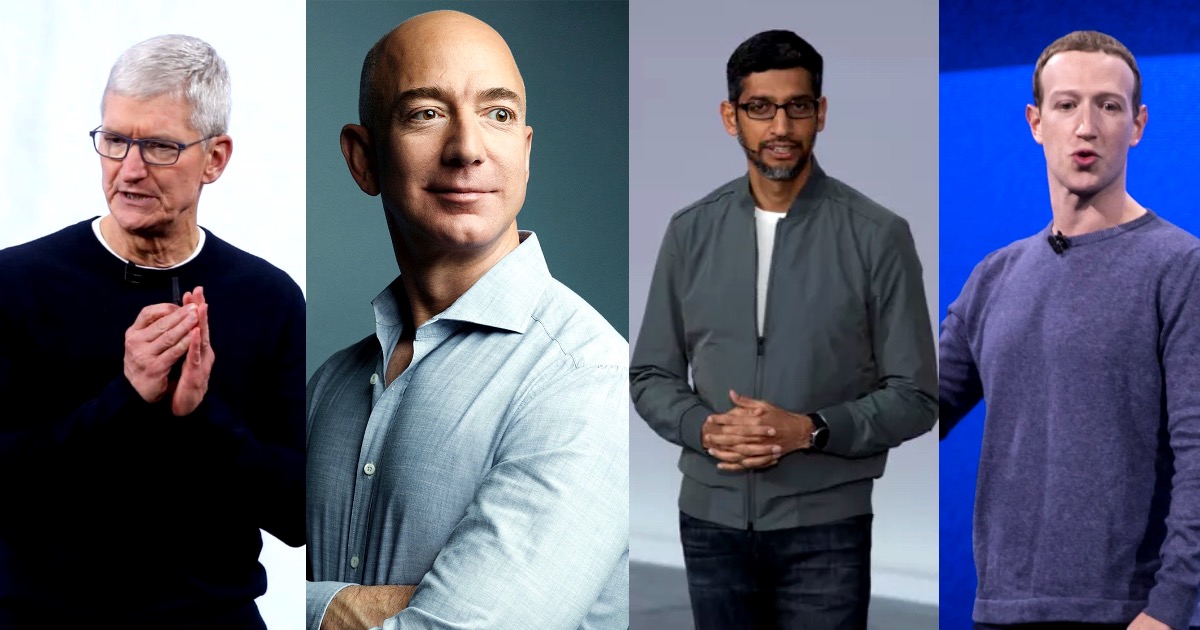 CEO's of Amazon, Facebook, Apple, and Google finally appeared before the Congress to testify for the on-going antitrust investigation. The six-hour-long hearing was interesting due to many reasons - its historical value, the dominance of the companies present, and the brutality of the grilling by lawmakers. Of course, as expected, it also included many moments where lawmakers came out misinformed and misdirected their questions to the wrong companies.

All the CEOs were questioned regarding the scale of their businesses and their domination positions through which they can dictate the market. Many of the questions were also related to censorship, buying out the competition, relationship with China, and more. The lawmakers had based their questions on interviews and 1.3 million documents related to these companies.

Mark Zuckerburg, CEO of Facebook, was questioned on its digital 'land grab' strategy, using which it has acquired companies like Instagram, which were once its competitors. An old email from 2012 highlighted Mark's fear that Instagram could hurt his company as it continued to grow at an unprecedented scale. However, Mark claimed that his company competes fairly.

Facebook was also accused of censoring conservative views, even though the top-performing content on the social network is from conservative sources and public figures. Mark was even asked a question related to Twitter's censorship but he answered with his own company's policies and what Facebook would do in case of moderation for content that spreads misinformation.

Mark also said that Facebook cared about the advertiser boycott but the company cannot let advertisers dictate its policies.

Tim Cook was asked the least number of questions out of all the CEOs but they were still brutal. He was grilled regarding App Store's policies. One of the questions was regarding the removal of parental control apps that were removed from the App Store in 2018, after Apple launched Screen Time. Cook said that the removal was due to privacy concerns and that there is still a healthy competitive market in the App Store for parental control tools.

Apple recently tried to get a 30% commission from virtual classes sold by Airbnb and ClassPass. The company is still negotiating the terms with these companies, but as of writing, ClassPass had removed its virtual classes from its iPhone app due to App Store's limitations. Cook did not provide any satisfactory answer but claimed that App Store policies apply to all developers and provide them a level playing field, including Apple's own apps.

Regarding Amazon's 15% commission deal, and an email which shows Eddy Cue laying out the terms, Tim Cook said that any company could get the same deal with Apple. Cook explained the competitive market landscape as:

It’s so competitive, I would describe it as a street fight for market share in the smartphone business.

Cook was also asked about fast-tracking Baidu's app review. Major companies often get fast-tracked and are provided dedicated account managers to provide support. This was also the case with Baidu's app approval and integration within iOS as a search engine alternative to Google and Bing.

Documents from the Hearing on “Online Platforms and Market Power: Examining the Dominance of Amazon, Apple, Facebook and Google" pic.twitter.com/E8auYYSeMn

Jeff Bezos was asked to explain Amazon's use of buyer's data to create its won products and its relationship with third-party sellers. Bezos explained that the company has a policy against such usage of data but did not guarantee that it could not be misused by its employees.

Amazon's dominating status was repeatedly questioned by various lawmakers and they brought up the opinion of many third-party sellers to scrutinize the company. Even AWS was brought up to question whether data from the service is used in creating its own competitors to services that are hosting on its cloud platform.

Regarding the delay in shipments for nonessential items earlier this year, Bezos was asked if he prioritized Fire TV, Echo, and Ring, Amazon's own products, as essential items to profit off them. He claimed that there was no such policy and profit was not part of the business decision.

Google was accused of pulling out of a Pentagon project and working with the Chinese military. Sundar denied these allegations and explained that Google still works with Pentagon on many projects.

One common thread between the answers from all these CEOs was that they are not as huge as it's been claimed, despite numbers showing otherwise, such as Google Search's 92% market share. They also claimed that they are good American success stories and often shifted the blame to China as a threat.