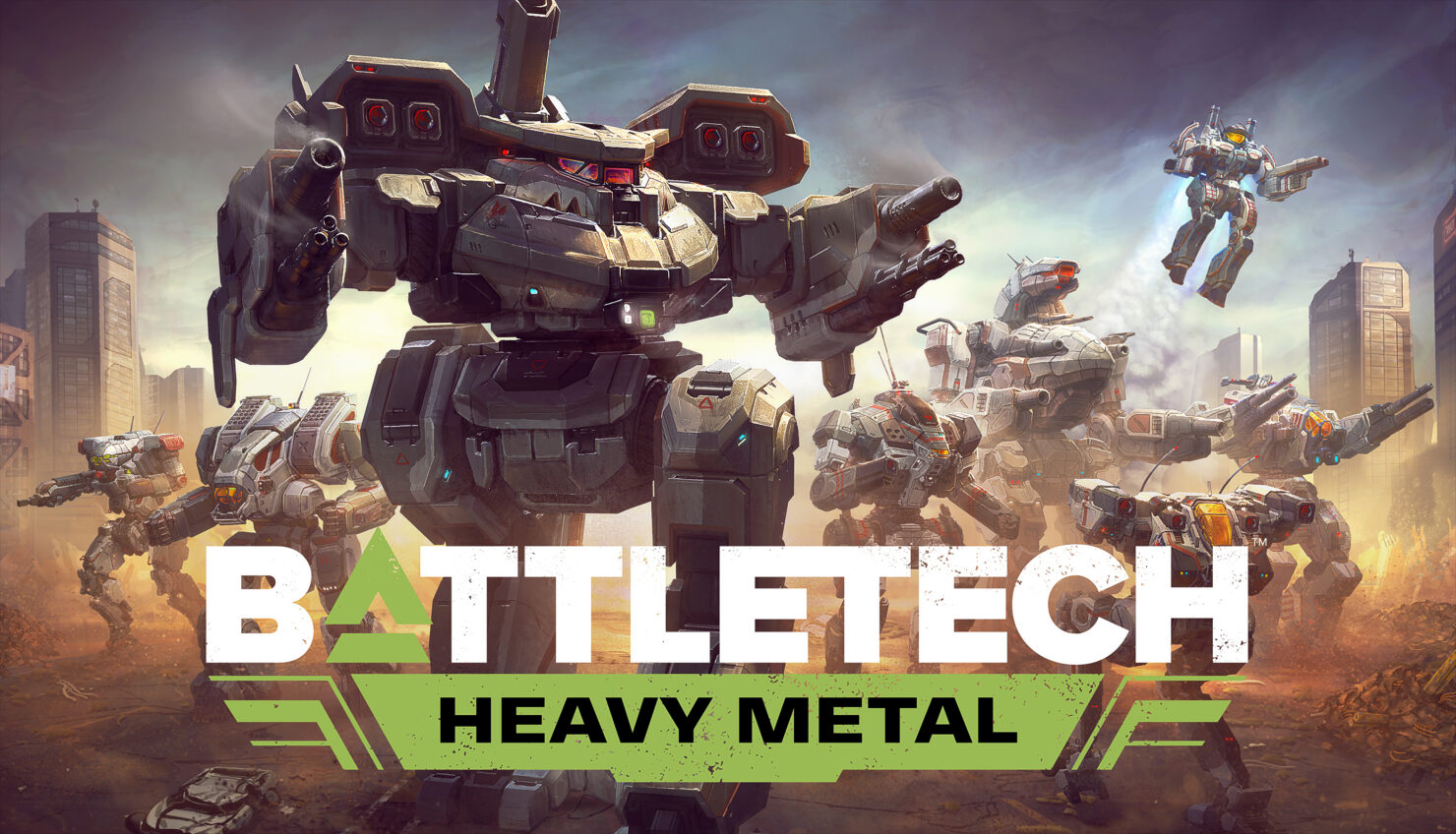 The final expansion in the BATTLETECH season pass, titled Heavy Metal, is nearly upon us, introducing new mechs, old mechs and some new weapons to batter them all with. At PDXCON this year in Berlin the developers demoed some of these new toys and how they’ve changed the game, and it all sounds very exciting.

Have you ever had this problem? You’re a lance commander and you’ve got a ship full of small mechs that are just gathering dust since you got the big boys of the battlefield? Well, with the Heavy Metal expansion, those little mechs will find new life as terrifying hunter killers. One of the newest weapons added to the BATTLETECH arsenal is designed to make small mechs a terrifying sight on the battlefield. Known as the coil gun, this weapon does more damage the more you’ve moved that turn.

This means that the little mechs with the higher mobility will be able to pour a lot of damage into the coil, while the bigger, slower mechs will have to try and keep them at a distance. Obviously there’s a lot of dangers that come with the little ones charging at the big ones, but a skilled pilot might be able to pull off some pretty powerful upsets with a coil or two.

But the large mechs have a few treats as well. A brand new heavy mech known as the Bull Shark, a brand new mech in the BATTLETECH lore, comes with the Thumper Canon, the first Area of Effect weapons in the series. This means you’ll be able to level reasonably sized city blocks and everything in them with these mobile artillery launchers. These canons only have two uses per mission, because that only seems fair, but they’re quite the spectacle.

On top of all this, the Heavy Metal DLC also comes with flashpoint mini-campaigns that weave a story through your career as a mechwarrior. To learn about the new mechs, the new weapons and how much damage I could cause with a coil gun, I spoke to Mitch Gitelman, founder at Harebrained Schemes, the studio behind Battletech.

To read more about the announcement, check out our news post when the expansion was revealed. and if you want to read the interview with the developers, scroll on down.

Are you worried the medium mechs will be obsolete in the late game now that you’ve created Coil gun for smaller ones?

First of all, I don’t worry at all. So the assassin mech we showed you, that hunter-killer mech, its especially good at taking out smaller mechs. I think medium mechs in general are pretty flexible, but also with the 1.8 free update adding mod support I really don’t worry anymore. Because I know that there are really clever people out there that will mods that are really cool. And that will support the gameplay

What are you hoping the community will do with the new mod support?

I’ve already seen tons of new mechs, which is really cool. There’s a mod called Roguetech out there doing all sorts of stuff, like for example the ability to field two lances of mech: you can bring eight mechs into the game. So I look forward to seeing what the people come up with when we make it easier for them.

Was it a difficult decision to add in an Area of Effect attack into the game?

Absolutely not, no. First of all, it exists in BATTLETECH lore already, we didn’t create the Thumper Cannon. So no worries there. But also, when you think about what happens in the game, you’ve got four mechs taking on sometimes up to 12 at the same time, you can see the utility of this thing. It's not like rock, paper, scissors, dynamite or something. It helps to level the playing field but it is not a win button or anything like that. Plus it's only got two shots so we can fit it in.

Also, every game out there that’s a modernish tactical game has a hand grenade which is an AoE attack, so there’s no design risk there for me at all.

You’ve also introduced unique abilities, integrated equipment, into the new mechs, will they be coming to the old mechs as well?

Yes so all ten of the new mechs are coming with these unique bonuses, the eight in Heavy Metal and the two free ones in 1.8, they’ll all have unique pieces of equipment. But again with the modding, we figure that everyone will go back and add what they think is best for the previous mods.

This is the wrong word for it, but we hope we inspire people to do that so that every mech gets a unique battlefield role based on its lore that works for everyone. That was a big part of what it was about for us. If you read the novels it sounds really cool but mechanically it's not there, so that’s what we wanted to reinforce.

There’s over two hundred novels, plus technical readouts and sourcebooks and that’s one of the coolest things about BATTLETECH, it's got this thirty-five-year history and this massive shared universe. Many many many people have contributed to it and this is just our contribution. And we want to pay homage to them, the people and work that came before.

BATTLETECH has been a challenging game, so are you worried that someone could just mod in a super mech and take that away?

That doesn’t concern me at all. Fear and worry are not parts of my life. You can’t be a game developer for over twenty-five years and have that as a core part of your being or else you should retire right away or you’ll end up in the hospital.

So no I’m not concerned by that, because people will pick up a mod and try it and if it isn’t fun they’ll put it down. It's not like it's in the base game they’re paying for, so it doesn’t reflect on the studio at all. And it won’t affect sales either.

What would affect sales is if someone makes something and the community turn to us and say ‘why didn’t you make that?’ and even then it won’t affect the sales really. Players are going to play and they’re going to play their way.

Do you have a favourite thing you’re introducing in Heavy Metal?

For me, Ryan Burrell our lead designer on Heavy Metal has done great work on the mechs and the weapons. For me also, I was interested in what Andrew Macintosh our writer did for the flashpoint mini-campaign. Because he had to react to the design decisions that Ryan made along with our art director Marco. Because Marco is the one that created the Bull Shark in the first place and actually did the weapons loadout for it as well. Ryan of course reviewed and tweaked it a little bit but Marco is a real Battletech nerd.

Then what we had to do is say: why does this mech exist? Why does this coil weapon we invented exist? Hoe does it fit respectfully into the lore? That was sort of the challenge for us. And then we thought it would be a full additional challenge if we created a flashpoint story that sort of weaves its way through your mercenary career so every couple of months something happens. Making it feel like a cohesive story while still giving you agency to go out and do loads of other stuff, and not making it feel ham-handed either.

Is it typical BATTLETECH design to create the new additions then make the story around it?

So then we figure out how to make it interesting and fun from a lore point of view, always.

How do you balance the power of the Coil Gun? Is it possible to balance?

So here’s the thing, if you look at it in a vacuum you’ll think it’s overpowered. But if you look at it from a career, you’ll think that’s not the way it works. So if you’re playing it in a skirmish yeah it might be OP, but if you’re playing it where your mech is worth a lot of money, and your coil gun is worth a lot of money too you’ve got to be really careful with that thing.

Also, there’s a risk/reward problem as well because the coil generates a fuckton of heat too so its actually a highly skilled based weapon. So if you move a mech into the wrong place, that mech is going to get popped. Then you’ve lost the mech, and the gun, and possibly even the mech warrior too. And that will put you in an amazing financial hole.

So when you’re thinking of balance you have to think of the whole picture and not just the damage output. Everything we’ve done with the new mechs, the new abilities of those mechs and the new weapons, its all about giving you new and interesting tactical choices to make. If we had made a coil gun that worked differently there would be no choice, you’d use it every time, and that’s not interesting or fun.

Do you have more plans after this season pass is finished with Heavy Metal?

So we’re going to take a holiday when we ship this, and after that, we’ll see what our next step is. *laughs* Classic nonanswer.

Fair enough. Thanks for your time!