Battlefield Hardline's launch is, as expected, not going so well. But not for the reasons you might think. The overall game appears to play quite well actually with very few bugs that actually affect gameplay, be it multiplayer or singleplayer. But there is another sort of issue that's been affecting the launch of Battlefield Hardline; that of the mighty DDoS. 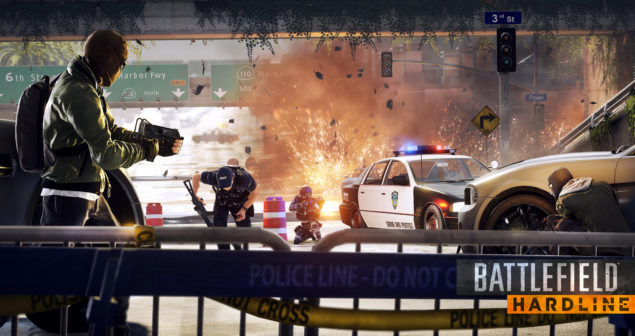 Battlefield Hardline servers are being affected by what seems to be a large-scale DDoS attempt. Players are not able to connect or are disconnected immediately.

EA has noted that the reported server problems are likely related to an attempt to DDoS a large number of servers of the game. It may not necessarily be anything that EA did directly to cause these issues. They've announced the issue via the official Battlefield Twitter account.

We’ve identified the connectivity issues on Xbox One are due to DDoS attack and working to resolve. Apologies for the inconvenience.

This issue affected all platforms and is currently being resolved. Last night I was able to play with very few problems, with only one server seemed to have connectivity issues. The unfortunate thing about DDoSing is that it's difficult to defend against a concentrated attack. If someone wants to throw 100's of Gbps of data at a server from a large botnet to knock it offline, then all the load balancing and other tricks in the world won't completely protect it. It'll still be slowed down if not completely unreachable. Simple and effective, unfortunately.

No modern Battlefield game can seem to get off the hook on launch day. First we have Battlefield 4 that was horrendous when it launched and took many months to fix and make playable. And now we have Battlefield Hardline which can be said to be far more complete this time around, though some people seem to want to ruin the fun for others. If there are few complaints, I guess whoever is responsible for these DDoS attacks want to make those complaints.

Thankfully this type of activity is relatively rare. And this is an exception to the norm. It is, though, rather concerning to see this happen to a game, any game, on it's launch day. So far no-one has spoken up and taken responsibility for the mess, so even if it's a bid for attention, it's not really working. If a group reveals itself, I won't update this to name them either, they don't deserve the attention. So let's just ignore them and get on with the day.

It's people like that that prevent us from having nice things.

Battlefield Hardline should be back in working order, but if it's not, then let us know what you're experiencing in the comments. Does anyone enjoy the game? Having fun with the multiplayer or even the singleplayer?