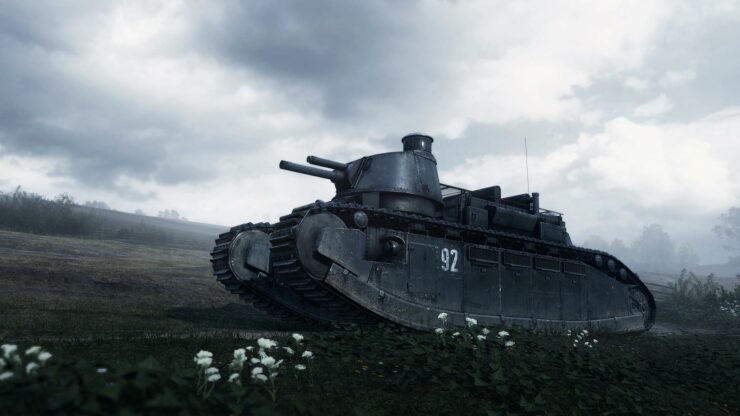 The first Battlefield 1 expansion pack named They Shall Not Pass is launching today, and a new update is also coming with it, bringing several gameplay tweaks.

Alongside the new content introduced by the expansion, Battlefield 1 has also received new Battlepacks Features and a new Party Leader feature.

The new update also includes a variety of general tweaks as well as changes for weapons, gadgets, and vehicles.

As part of an ongoing effort to address excessive use of explosive gadgets and grenades, we changed the way grenades resupply for this release. The goal for these changes is to reduce the amount of grenades available while getting constantly resupplied, as it is common in choke points, without making resupplies unnecessarily long in other gameplay.

Similar to some gadgets, all grenades slowly resupply when out of ammo. This resupply is greatly sped up when near an ammo crate.

The resupply timers are as follows:

Frag: 36 seconds
Light AT: 36 seconds
Impact: 36 seconds
Incendiary: 36 seconds
Gas: 27 seconds
Mini: 24 seconds
Smoke: 18 seconds
Resupplies are 3 times as fast near ammo crates
Reduced Smoke, Gas and Mini Grenade ammo from 2 to 1
Ammo pouches currently no longer resupply grenades
These changes are subject to tweaking in future releases. We are looking to expanding this system to more gadgets in the future.

Reduced rate of fire from 450 to 360
Increased close range damage, allowing it to kill a healthy soldier with 4 hits within 16 meters
Self-Loading Rifles and Pieper M1893:
Made recoil decrease smoother
Most recoil values were tweaked, but are not comparable to previous releases
Updated the way the CONTROL value is calculated to better represent the amount of recoil that players have to compensate for
Self-Loading Rifles
Fixed an issue where spread would reset too quickly after firing
Reduced base spread increase per shot of self-loading rifles from 0.25 to 0.2
Decreased base spread decrease per second from 3.75 to 3
Decreased the spread increase per shot bonus in ADS that Marksman, Sniper and Optical versions get to maintain the old effective spread increase per shot values of 0.125
Added a small bonus to spread decrease per second for Marksman, Sniper and Optical versions
Reduced the number of magazines carried by the M97 Trench Gun by 1

Reduced first shot recoil multiplier from 1.9 to 1.8
Reduced horizontal recoil from 0.6 to 0.55

In addition to the End of Round scoreboard, reporting emblems is now possible to do from the in-game scoreboard as well.

Medals that are not taken are now shown as dimmed

Class Rank progression is now shown on End of Round screen

Fixed bug where the title could hang if losing network connectivity while matchmaking into an Operation
Navigating Battlepacks on Loading screen after entering a second time
Issue with navigating BF4 assignments from BF1
Rare occurrence where a number would be shown instead of game server name in the server browser
Utilizing $ in server filters now works correctly
Rare crash when watching video in the UI for many hours
Favorite star can now be seen when the favorite server is selected in the server browser
Fixed hang issue when loosing connectivity on "Get Battlepacks" screen
Battlepacks shortcut now updates correctly on home screen
Removed incorrect progress bars from vehicle stats
Disabled order part of commo rose in Team Death Match
Fixed text alignment EOR Map voting in the Arabic version of the game
Fixed text alignment in the Customize Soldier screen in the Arabic version of the game
Fixed several typos present in various Codex descriptions
Fixed an issue that caused the player list in the deploy screen not to be selectable as intended
Soldier inventory now properly displays on HUD when option is set to always show.
Fixed an issue where the Squad XP boost percentage number is shown out of place in the Arabic version of the game
Minor text changes to Achievements
Fixed an issue where the "Party Join" notification would still be active after the notice would disappear
Sidearm skins are now visible in the kill card
Fixed an issue where there was overlapping Arabic text on the Medals screen
The Grenade Crossbow now has a correct Codex image
Players are now rewarded with corresponding Dog Tag for obtaining Service Stars with the Crossbow Launcher
PC: The skip button for the Battlepacks unboxing sequence no longer appears twice when using a gamepad
PC: Shoulder button indicators no longer appears and disappears when using a gamepad
PS4: Fixed bug occurring if purchasing PS Plus while being invited to play

Whole Magazine Reload. This setting will discard all remaining bullets in a clip when reloading.
The Flare Gun is no longer available when choosing "Melee" only in the server configuration
Reduced the intensity of the fog on Giant's Shadow

Fixed an issue where new installation of the game and its system files would fail due to missing files.

Fixed an issue where the weapon firing animation becomes erratic when looking up or down.

Fixed some clipping issues on the Giants Shadow map

Fixed an issue where a flag would appear to be floating in mid-air on Giant's Shadow's C objective.

Improved messaging for spectators between battalions in Operations.

Removed Camera movement when driving on the MarkV