After escaping the Nautiloid ship at the beginning of Baldur’s Gate 3, you’ll be more or less left alone to explore and discover the rest of the game for yourself. The wilderness paths offer a few teammates and some old ruins might hold some treasure, but it's up to you where, when, and how you’ll traverse the world.

While these discoveries are fun to explore yourself, we’ve made it a little easier for you. The first real settlement you’ll come across as you explore the world of Baldur's Gate 3 is the Druid’s Grove. This secretive community of nature worshippers, refugees, and adventurers lies beyond one of the first big battles of the game. But with so many people to speak to, there’s a good chance you might miss some useful information, quests and secrets as you race to get the tadpole out of your eye.

Below are some suggestions as to who to introduce yourself to, and where you might want to go within the Grove. We’ve avoided Baldur's Gate 3 spoilers as best we can, but nevertheless this guide should help you get the most out of this early area of the game, and teach you how spot the important characters and secret routes in the other areas to come.

As soon as you pass through the portcullis to enter the Druids Grove, take a left and follow the path up the hill to Nadria and their telescope. Feel free to heal yourself if the battle to enter the Grove left you wanting. And just in case the mood strikes you, feel free to check out our guide on combat tips as you make your way there.

Head back down the hill and enter the large cave down the road from the portcullis. Once inside take a left and find this familiar face standing on a small wooden platform. Not only does he have some information on the missing druid everyone is so worried about, but he also has a contract you take if you’re feeling brave.

Follow the cave around from Aradin and keep an eye on the small tent structure on your right as you progress. Inside, Auntie Ethel is cooking up a storm of potions and notions. She is one of several traders in the Grove that can sell you useful items and buy any junk you might have already collected. On top of that, she’s also a healer, which is just the thing you might need with that pesky mind flayer problem.

At the back of the cave and to the left if you’ve come from Auntie Ethel’s tent is a small wooden wall that marks the entrance to the Groves makeshift prison. In here you’ll find a rather rude but somewhat less murderous goblin and some fairly upset tieflings. There’s a chance things might not go to plan here, but there might be some useful information to be found for those desperate enough to seek it out.

Once you’re done ‘talking’, it might be worth checking behind the goblin’s cage for an unassuming ledge you’ll have to jump to reach. While you might struggle to find a use for it right now, it’s worth remembering for later.

In the middle of the cave, slightly back from the makeshift prison, you can find Wyll training some children in the art of war. You can recruit him, if you’d like to add the Blade of Frontiers to your outfit. And while you’re there you might also notice an adult tiefling taking notes on the swing of the blade, helping him out and might find you rewarded, if you’re feeling charitable.

To the right of Wyll, you’ll come across Doni on the path that leads towards the inner sanctum of the Druids Grove. He’s a slightly strange boy, who will vanish if you try and find what he’s looking for. But with some decent perception but might just spot where he went, even if you can’t find a use for it straight away. 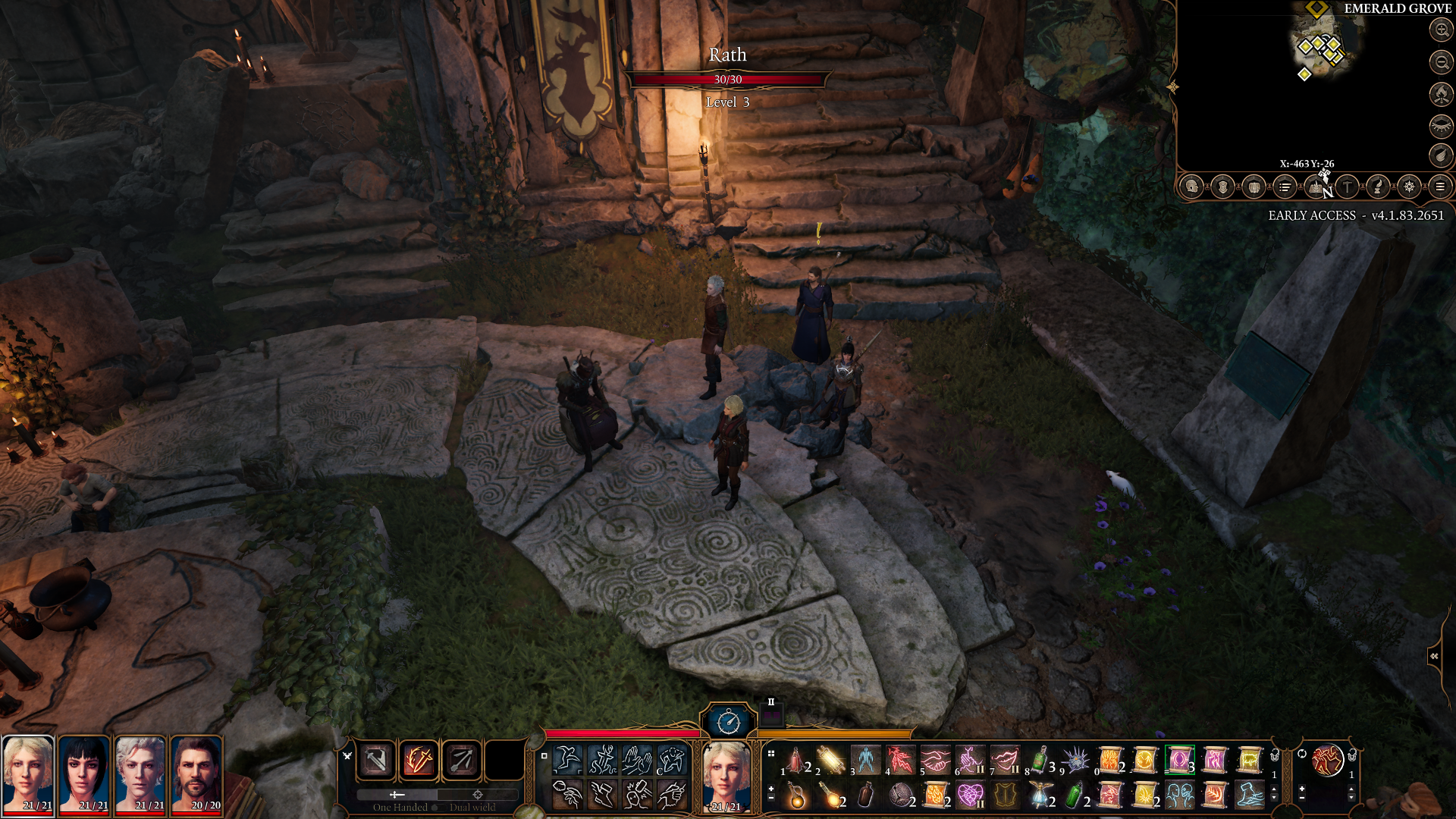 Once you make your way into the Grove proper, you’ll have the chance to intervene to save a young girl caught stealing from the druids which also serves as your introduction to the leader of this area. She wants to speak to you about the ritual her Druids are casting, but don’t forget to speak to Rath as well. He has another quest for you, one that the good-aligned folk might be more tempted by. He might also have something else useful, but we’ll get to that in just a moment.

In the next room after Rath, you’ll find one of the Grove's healers and veterinarians tending to a bird. While not as skilled as the missing druid, she does offer a solution of sorts to your tadpole problem and more importantly, she gives you access to a secret room beyond her chambers.

Once Nettie has led you into her laboratory you’ll quickly notice that there are three magical runes and a fourth, missing one, surrounding a large wolf statue. While you can spend plenty of time raffling through all the notes on the desks and bookshelves looking for a clue, it might be worth checking Rath’s pockets instead.

You’ll also find one wall at the back of the lab is oozing poison gas. This wall can be opened, much like the one used by Nettie to let you in here in the first place. You’ll just have to use your head to find out what she used to do it.

There are many more secrets to be found in the Druid's Grove, and many people you can talk to that have been left off this list. But while you're exploring the relative safety of this little settlement, make sure you at least speak to each of these NPCs for the rewards, quests, and help they can provide you on your quest.