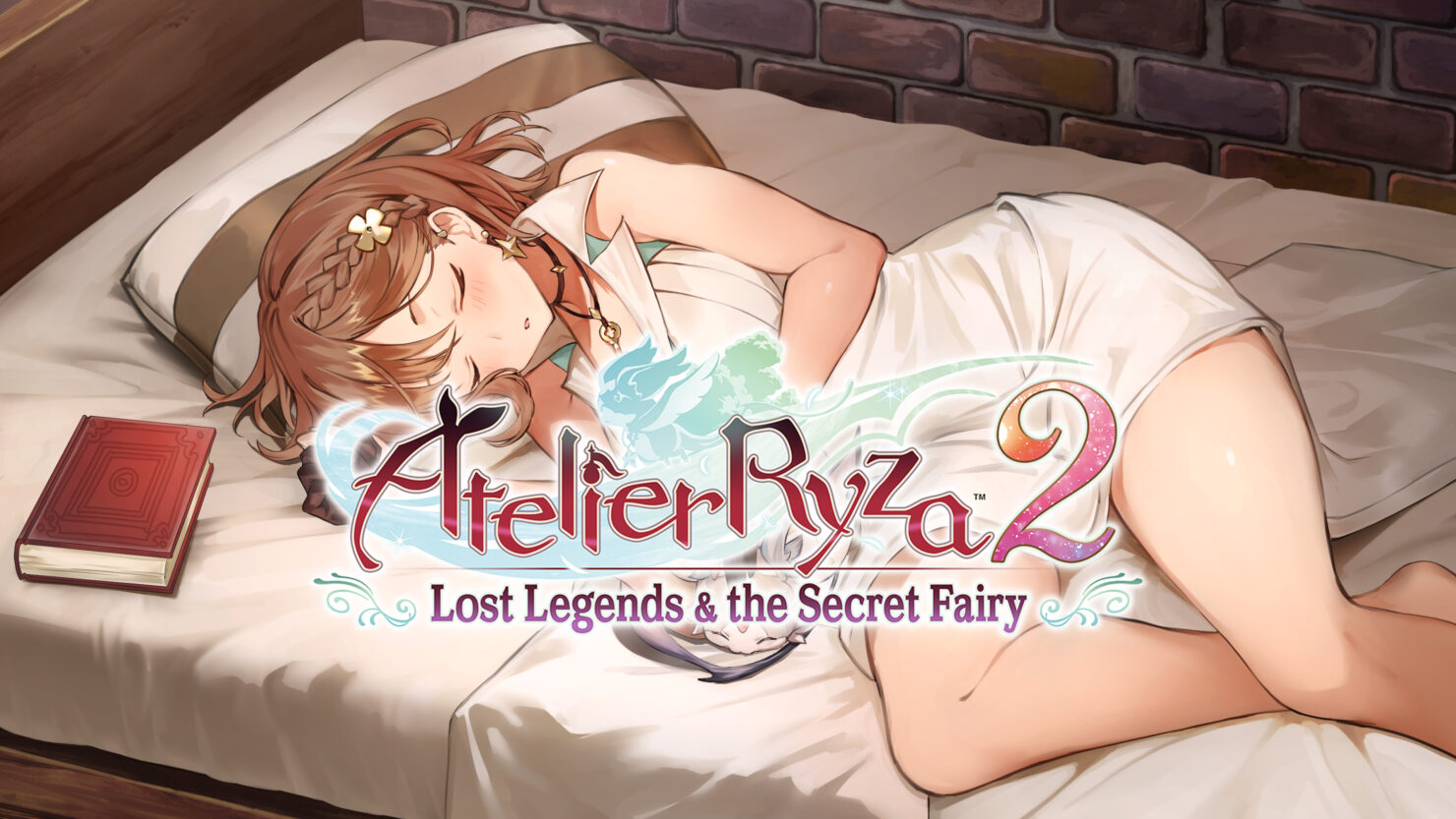 When I first started writing this preview of Atelier Ryza 2: Lost Legends & the Secret Fairy, I wrote down "I don't know how GUST manage it". That's not quite accurate though; I do know how they manage it. GUST has barely moved an inch in a decade, keeping the same art style and only changing other aspects when necessary.

One such change is that Atelier Ryza 2 is the first direct sequel in the series containing the same lead protagonist. This shouldn't come as a surprise due to the sheer popularity of Atelier Ryza: Ever Darkness & the Secret Hideout. It is the best selling of the Atelier series, having sold over 500,000 copies within the year after launch, and Reisalin Stout is arguably the most popular heroine of the Atelier series. 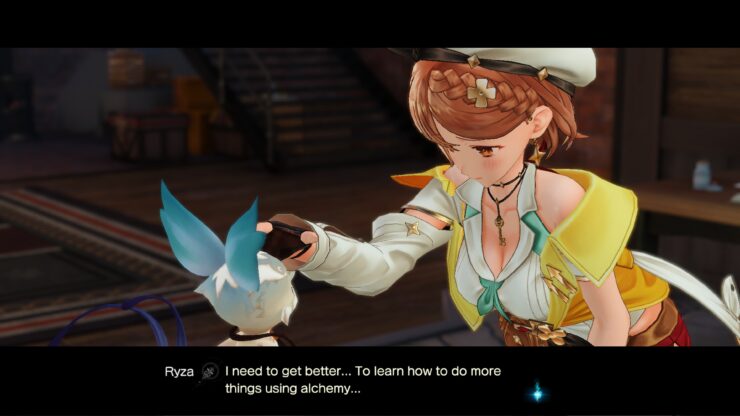 Set three years after the first, Atelier Ryza 2: Lost Legends & the Secret Fairy sees a more mature Reisalin who is at her best in this outing. I can't really speak much as to the story, but what I can tell you is that Reisalin gets a letter asking her to go to the capital. She heads to the capital, meets up with her friends and soon gets given an item. This leads to what seems like the main story, which starts by Reisalin exploring ruins and...

Honestly, I can't say much because Koei Tecmo doesn't want me to reveal some key story beats. The closest I can tell you is that you'll encounter a fairy called Fi, this fairy constantly speaks by repeating "Fi", "Fiiii" and similar words starting with the letter F and then featuring one or more of the letter i. So yes, it's one of those characters. I'm not going to say Fi is as annoying as Navi. I haven't spent enough time with Fi to make that assessment. Time will tell.

What little I can talk about with the story is that you'll be back with a group of old friends and all of them have aged. As I so subtly hinted, Reisalin has been made into even more of a traditionally sexy animé character. Her breasts are highlighted at every given opportunity, and her ample thighs are constantly on show. It's all thanks to her outfit which hasn't changed much; it's just a little more revealing.

I should say, personalities are also reflective of them growing up. They appear to show more concern about issues that impact people as they get older. All of the characters have seen this growth, as has the world itself. Being in the capital city and surrounding areas, you'll find yourself in more built-up environments. Of course, with a large part of the game being to explore ruins, you'll also find yourself in some run-down, demolished locations. These will be joined by the usual areas you find in a GUST game, different areas that are all picturesque in the usual animé style you've seen in practically all of the studio's earlier games. 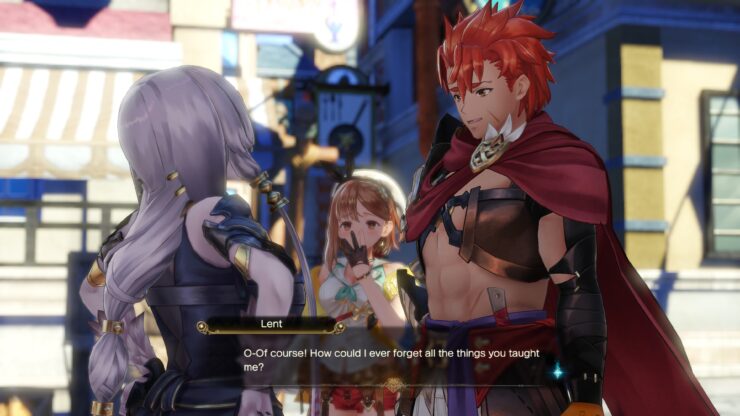 So while at this stage I can't say anything about the game other than "it looks like a GUST game", which is a traditionally good looking animé game, and I can't go into any real details on the story, I can talk about the gameplay. One improvement of the gameplay is in the movement, the exploration. There's a further level of verticality to the game, enhanced by swimming, climbing and even swinging across short distances. The series has always been a collection of mostly linear, or small, areas. This hasn't changed much, but these new options do make it feel more open than before.

The main point for all of this is to give you a little more freedom when on the hunt for new ingredients. As always with the Atelier series, a huge part of this game is the alchemy. The way items are acquired has been increased, even requiring return visits to areas as you unlock new methods of traversal and even equipment for harvesting. Naturally, you also get items from monsters and have a chance of obtaining rare items from them too.

Speaking about alchemy, the system has been changed. Learning new aspects of alchemy, new recipes, improvements, and more are all made through a new skill point system. These skill points are easily obtained through crafting something, doing a quest or going through the ruins. Also, going through these ruins will lead to you unlocking further aspects of alchemy. It certainly feels like an improvement on systems from previous titles and all works very smoothly within what part of the game I've been able to experience so far. 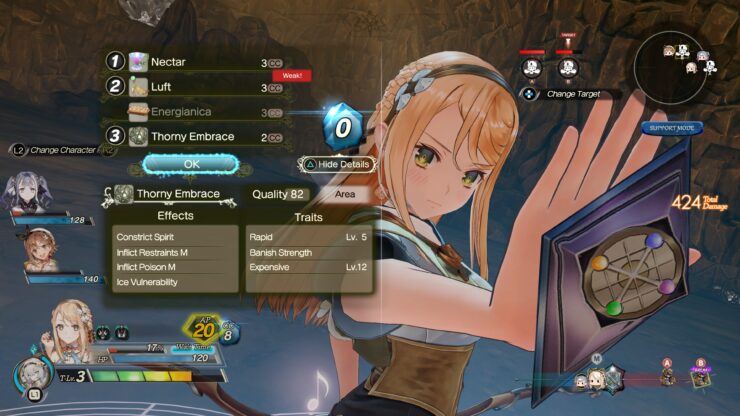 The battle system is another area that has been improved. The active battle system carries with it a faster pace due to action points quickly stacking, allowing you to use special attacks and items as required. Furthermore, due to how the system works, you can control just one character - or swap between them if you like - and work alongside the other characters in a very efficient way. You'll see the other characters in your party throwing out requests which, if fulfilled, can lead to strong combination attacks.

Everything I've played so far has seen a progression in how GUST games play. Even in the early stages, there's a hell of a lot of cutscenes. It can keep things feeling sluggish. However, at the same time, the gameplay itself feels quicker. Alchemy, battle, even questing goes along at a more rapid pace. There are, of course, elements I haven't fully encountered, but initial impressions are positive.

That is essentially what I can say about the game. As it stands, Atelier Ryza 2: Lost Legends & the Secret Fairy looks like an improvement on the earlier Ryza entries. Of course, initial impressions are just that, initial impressions. I do look forward to playing the game completely when the English version is released in January 2021.

FAIRY TAIL, The Next JRPG from Gust Studios, Will Launch Next Year on PC, PS4 and Switch

Nelke & the Legendary Alchemists ~Ateliers of the New World~ Preview