Note - This product is not an April's Fool joke and would be launched in the upcoming weeks.

ASUS has officially launched their latest high-performance graphics card, GeForce GTX 980 20th Anniversary Gold Edition. This special graphics card is made to mark the 20th year of ASUS's commitment to the graphics market and it has been 20 years since they started producing their first graphics cards. The new GeForce GTX 980 20th Anniversary gold edition has some key features which include a custom design PCB that comes with insane factory overclocked frequencies and update to the aesthetics of thier DirectCU II Platinum cooling. 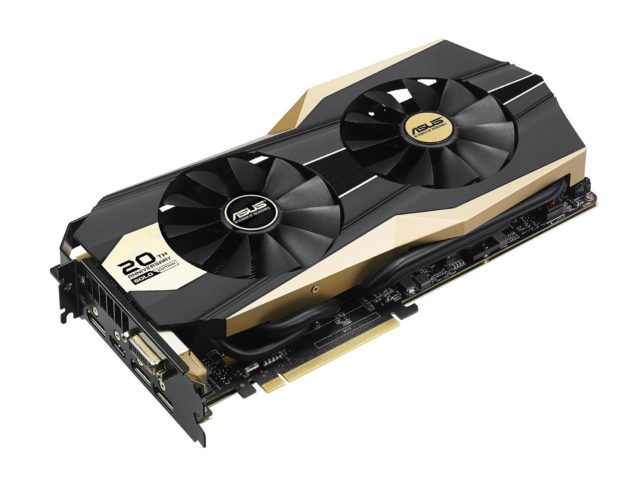 Coming to the specifications, the card features the GM204 chip which could be found on the GeForce GTX 980 and GeForce GTX 970 graphics cards. This in specific, makes use of the GM204-400-A1 core which packs 2048 CUDA Cores, 128 TMUs and 64 ROPs. The chip is backed by 4 GB of GDDR5 memory running across a 256-bit interface. The core clocks are maintained at 1317 MHz (reference) and 1431 MHz (boost) frequencies which are ridiculously high for a factory overclock but the Maxwell architecture has proved from top to bottom that the new cores can sustain really high clock frequencies. The memory remains untouched with the reference clock speed of 7 GHz (7008 MHz) but can be overclocked by users to speeds of 8 GHz due to the extra cooling.

The card boasts a really beefy PCB design which is custom built by the hands of ASUS's engineers. The PCB is the same one we saw on the GeForce GTX 980 Platinum that features 12 Phases for core and 2 Phases for memory with their latest DIGI+ II design featuring the high quality components, ICs, Super Alloy Power design, chokes and capacitors to deliver unprecedented performance to overclockers and enthusiasts. Juice is provided through dual 8-Pin connectors so we are looking at a TDP around 300W which means that a lot of power will be put into the VRM to unleash the full potential of the graphics card. The PCB is larger than the reference model due to the custom design and the addition of more phases on the board. The VRMs are cooled by a large black colored heatshrink which offers cooling support.

For cooling, ASUS has went with an all black designed internal dense-aluminum fin heatsink which is a large stack of aluminum fins cooled by two 92mm fans. Unlike the Platinum, the Gold Edition doesn't come with the CoolTech design but the standard fin blade fan which adopt 0dB technology when the card is under thermal limits. The heat sink features an internal heatpipe design and the single black colored heatpipe that comes out of the heatsink is larger than the rest of the cooling pipes measuring at 10mm in diameter. The heatsink features a DirectCU II contact surface which dissipates heat from the core to five black coated heatpipes that circulate the heat to the large aluminum fin array.

As for design, the card is a pure gold and black colored beast. It is labeled with its 20th Anniversary Edition marking on the top of the shroud with strikes of gold on the sides. A color-coded load indicator gives users a sense of more control and accessibility over the card. Display outputs include DVI-I, HDMI and three display ports. The backplate is colored gold which looks great with the card itself and a support bracket keeps the several layers of the card including PCB and Shroud in place. Voltage read-out points, Safe Mode operation and memory defroster are ASUS's OC tools which are going into the design of this card and you can easily use 4 of these inside your rig when launched. ASUS didn't gave a word on the pricing but expect it to hit at a price range around $600 US.

While the GeForce GTX Titan X has launched, we won't see any custom designs since Titan series has been restricted to reference made design only. We can expect the GeForce GTX 980 Ti which is going to be the more consumer optimized and price conservative graphics card based on the GM200 GPU core to get a design make over like the Gold Edition from ASUS. 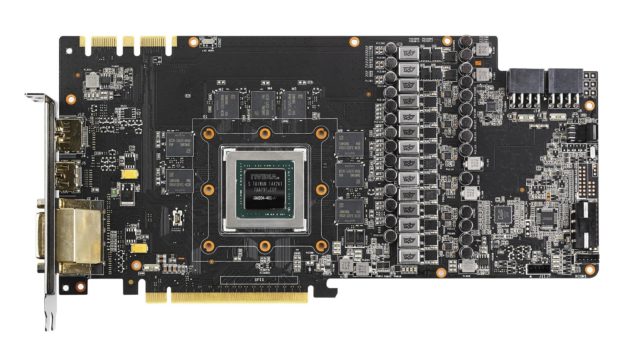 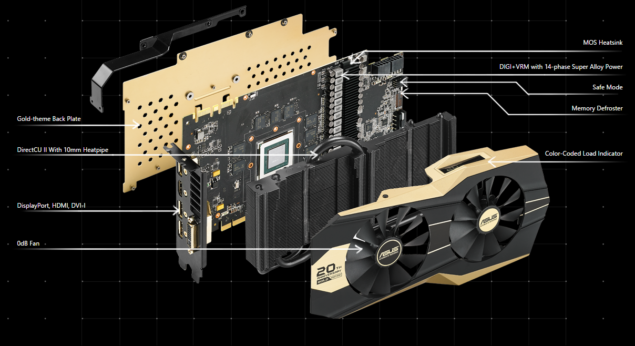