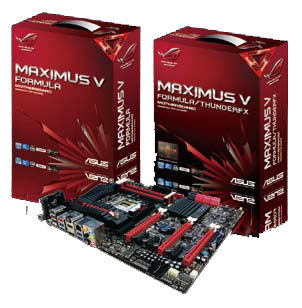 Earlier as you might have noted, the Z77 based Maximus V had been only limited to the Maximus V Gene with no sign of its ATX sized brother yet. However, ASUS hasn’t launched the Maximus V Formula yet although VR-Zone has managed to get some information on it.

The Maximus V Forumla will launch in two variants that is either the inclusion or exclusion of components such as Intel’s Thunderbolt, addition of Battlefield 3 game, ThunderFX and so on.

The ThunderFX is however, a USB audio sound card with a built in headphones amplifier. Powered by the C Media CMI6631 chipset, it’s also reliable for console headset noise cancelling. Besides that, the onboard audio features the TI 6120A2 amplifier, the same as the one used on ASUS’s award winning Xonar Essence ST/STX.

Besides that, ASUS will probably be announcing the Maximus V Formula at the 2012 Computex next week with also the possibility of the unveiling new ROG products.