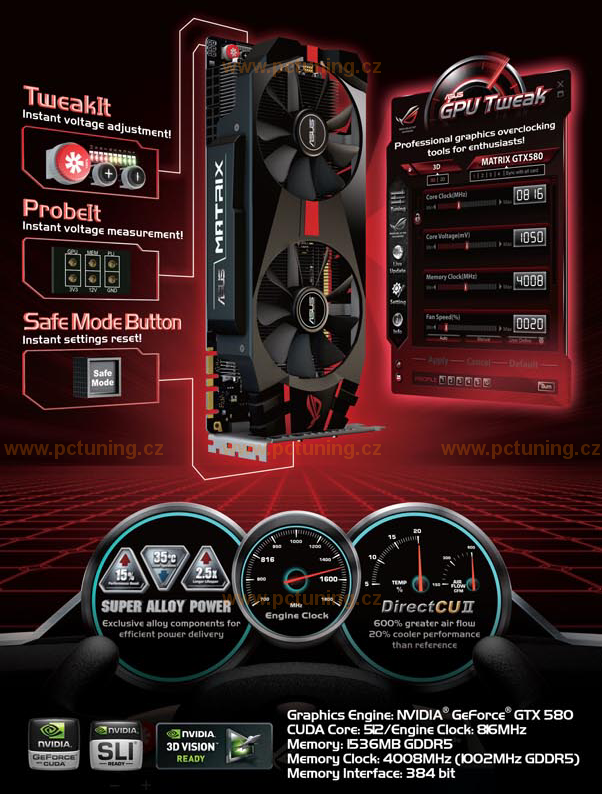 Asus has detailed its new upcoming "Geforce GTX 580 Matrix" graphics card which would be part of its top of the line ROG (Republic of Gamers) series products. Previously shown at Cebit 2011, The card uses a custom PCB and Heatsink which allows for better performance and cooling.

The PCB is equipped with better quality components and a 16 Phase VRM area as compared to the 8 VRM phase of a stock 580. This would allow the company to provide the card with higher Factory clocks of 816/1050/4008Mhz for Core/Shader/Memory respectively and a 1.5GB GDDR5 memory running along a 384-bit wide memory interface. However, Higher clocks mean that more heat would be generated from the already hot GF-110 Core but no need to worry as the card comes Pre-Equipped with Asus's own Three slot covering "Direct CUII" series heatsink cooler which uses 5 direct contact heatpipes coming out from the copper base through which heat is dissipated to the two large aluminium array fin blocks. The heat transferred is then carried out of the case from the airflow provided by the two fans.

The Asus ROG series being a top of the line brand of the company always come with some exclusive features, The ROG Matrix 580 would feature "TweakiT" which are 3 buttons installed on the PCB allowing for manual adjustment of voltages, Another "ProbeIt" feature is helpful for measuring voltages instantly. Finally there's a "Safe Mode" button equipped on the front display connector panel which sets the card on stock settings if overclocking goes wrong.

The availability isn't announced but its likely to launch on Computex 2011, As far as the pricing goes the card would cost around the 700$ mark as rumored here. 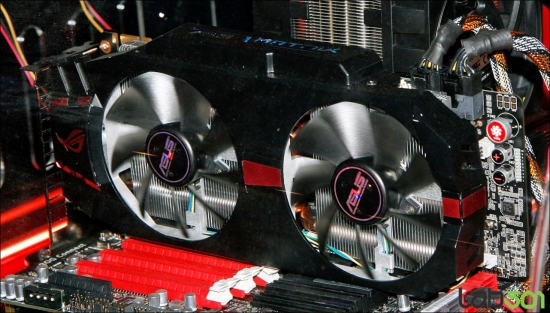