How to Assign Gestures & Actions to iPhone’s Touch ID Sensor

If you have a jailbroken iPhone, here's how you can assign gestures to the Touch ID sensor to invoke several different actions.

Touch ID is a wonderful little layer of security that keeps our iOS devices and data safe. Since it resides on a device that is made by Apple, this also means that the sensor is completely locked out for developers to make use of properly. However, thanks to a wonderful little practice called 'jailbreaking,' developers can dig deep into the world of Touch ID and make it do wonderful things apart from just authenticating fingerprints.

Take FingerTouch as a wonderful example. It's a jailbreak tweak that ties in with Touch ID and allows a user to set gestures on top of it. Wait, what? Gestures? Touch ID? Well, yes, you read that absolutely right. Using FingerTouch, you can assign gestures on the Touch ID sensor on your iPhone.

Once downloaded and installed from the BigBoss repo in Cydia, the tweak allows you to set a number of gestures on top of Touch ID. This includes the following, as per the tweak's description: Touch, Hold, Double Touch, Triple Touch, Touch and Hold. Once these gestures are set, you can assign each and every single one a unique action. The currently supported one are as follows: Lock, Home, Switcher, Flashlight, Screenshot, Reachability, Switch to last app, Siri, Rotation lock, Control Center, Notification Center and Close Current App. 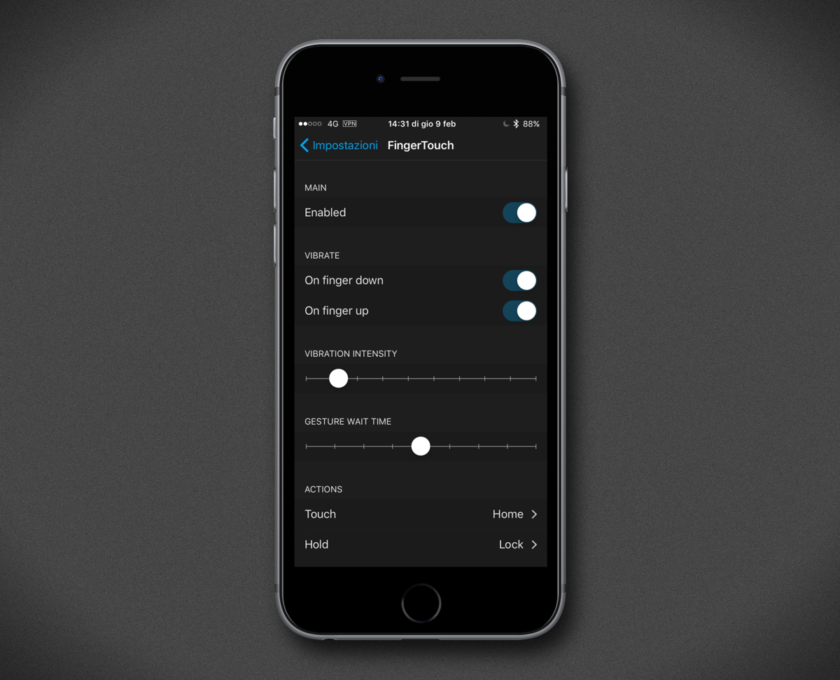 As you can see from the list of supported actions, the gestures are far too less in comparison. This means you are limited to setting five actions along with gestures. It would be great if the tweak allowed you to set custom created gestures as well. There's a possibility the developer might throw in something similar in a future update to the tweak.

Last but not the least, the developer of FingerTouch warns users that BioProtect will break the tweak. So, you have to decide which tweak you want installed on your device. Either it's going to be FingerTouch or BioProtect only. The issue will be eventually sorted out in an update to the FingerTouch tweak.