While Assassins Creed 3 has been confirmed for the PlayStation Vita alongside the PS3 version it seems that both the games will be sold under different names, stories, settings and will have different protagonists. The new details help confirm the earliest rumors of a female assassin and the other details confirm that the game will take place in the same time as Assassins Creed 3, the female assassin and Connor will cross paths and her story takes place in New Orleans. Say hello to Aveline, the newest introduction to the Assassins Creed series and there is even confirmation that Desmond isn't the only one under an Animus. 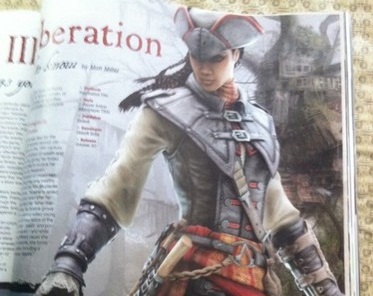 And there you have it folks, as you can see the game will indeed be worth buying and if you are a huge fan of the series and its story I am sure that the game will definitely give you incentive to buy a Vita in the near future now. I am also intrigued to find out more about Aveline and how she carries her self out in Liberation, hopefully we will see something at E3.

It's good to see that Desmond might not really be the last of the Assassins and there is someone else out there.

As an added bonus here are a couple of scans for your viewing pleasure ; ) :