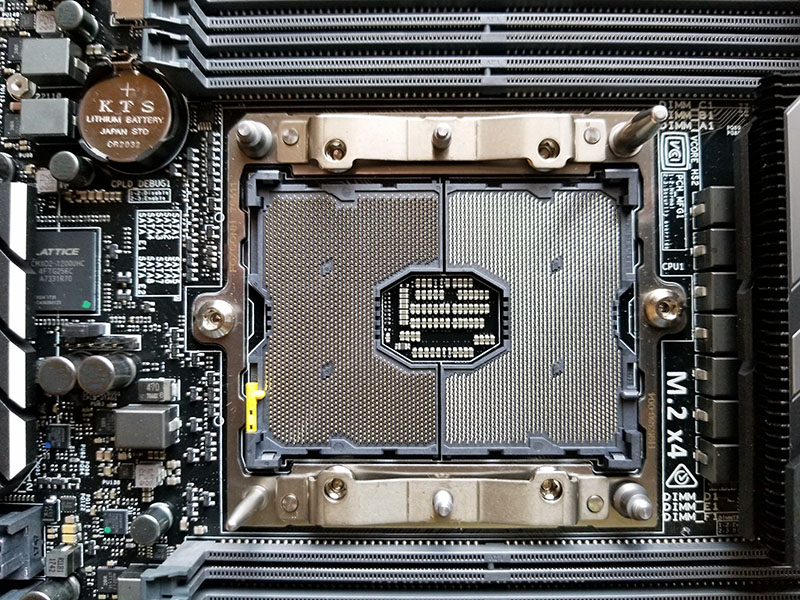 ASRock has been offering some really good small form factor designs on each generation of HEDT processors from Intel and AMD. They have the smallest X299 motherboard (X299-E-ITX AC) around and also the smallest X399 (X399M Taichi) motherboard. Now, ASRock Rack has released the MITX EPC621D4I-2M motherboard which is the smallest C621 chipset based motherboard.

The motherboard "EPC621D4I-2M" which is part of the ASRock Rack Mini-ITX series is a marvel of engineering. It features the LGA 3647 socket which can support Intel's Xeon Scalable processors. These include the Skylake-SP and Cascade Lake-SP parts. The socket is rated to support up to 205 Watt SKUs so we can exclude the HEDT Xeon W-3175X from the list, however, the rest of the 205W 28 core Xeons are fully compatible with the motherboard.

You can, however, run the  W-3175X on the board except that it won't Boost properly since it has a 255W TDP and would end up hitting a power limit quickly under load.

The motherboard makes use of a 6 phase VRM which is cooled by a small heatsink with extended aluminum fins. There's a single 8-pin connector to power the motherboard. For memory, there are four SO-DIMM DDR4 slots which can support up to 128 GB (Dual Capacity) of memory with speeds of up to 2666 MHz.

Storage options include two M.2 slots on the back of the motherboard and up to 5 SATA ports. The single PCIe 3.0 x16 slot will be used for graphics cards. I/O on the motherboard includes two RJ45 Gigabit LAN ports, two USB 3.0 ports, and a single VGA connector. The design of the motherboard is very basic and the socket itself takes up around 40% of space. It is worth noting that these types of server platforms are there to maximize density. As mentioned in the review by Hwp.ru, the board does offer good performance numbers but it isn't the most ideal solution if you want a Xeon setup on a Mini-ITX form factor.