ASRock has announced their latest X99E-ITX /ac motherboard at CeBIT 2015 which is the first mini-itx board designed to support Haswell-E processors. The motherboard comes with a standard mini-itx design while has things kept to the high-end due to the HEDT (High-End Desktop) positioning of the Haswell-E platform. The LGA-2011-3 socket on the board can support all the current and upcoming Haswell-E processors. 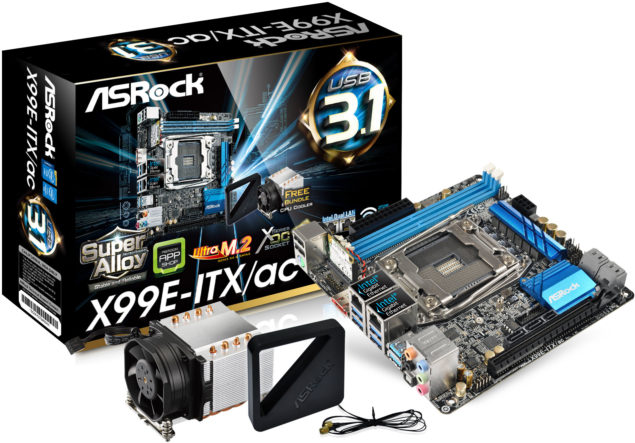 Anandtech managed to gather some details of the board and while it features the LGA 2011-3 socket along with a X99 chipset, the socket it makes use of in fact is the revised and narrow version which is incompatible with most modern coolers hence ASRock ships a cooler with the package which is custom designed and offers compatibility with the mini-itx motherboard. The small cooler comes with a large aluminum fin block that has 8 copper heatpipes etched into it. A fan measuring around 80mm blows away hot air from the heatsink. As for the design scheme, ASRock went with their regular blue and black color scheme with a heatsink embedded on the VRMs and PCH.

The ASRock X99E-ITX /ac comes with a 6-Phase VRM featuring a high-quality design and components implementation which have the XXL aluminum alloy heatsinks featured across the board. Other components include Ultra Dual-N MOSFET (UDN) that delivers more efficient Vcore power supply with lower Rds(on), Premium 60A Power Choke that offers 3 times better saturation current, highly magnetic and heat resistant design Premium Memory Alloy Choke and 12K Platinum Capacitor to ensure stable performance and industry’s longest lifespan – 12,000 hours. Overall, while the looks can be a bit deceiving, the motherboard will still be a performer in the high-end sector.

The CPU socket is powered by a 8-Pin connector while the board is supplied power through a 24-Pin ATX power connector. There are two DDR4 memory slots located next to the ATX connector which show that it comes with dual channel memory support of up to 32 GB of memory capacity which is cut down from quad channel which is found on the standard X99 based motherboards. Storage options include 4 SATA 6 GB/s and a single SATA Express port. Expansion slots include a single PCI-e 3.0 x16 slot while a single USB 3.0 front panel header can be found on the motherboard.

I/O on the motherboard includes, dual Gigabit Ethernet ports, a 7.1 channel audio jack, an Ultra M.2 slot which is already equipped with 802.11ac WiFi card that can be connected to an external WiFi adapter, two USB 3.1 ( Type-A) ports, 4 USB 3.0 ports, 2 USB 1.0 ports and an eSATA connector. The pricing of the motherboard have not been confirmed yet but it's expected to launch this month.