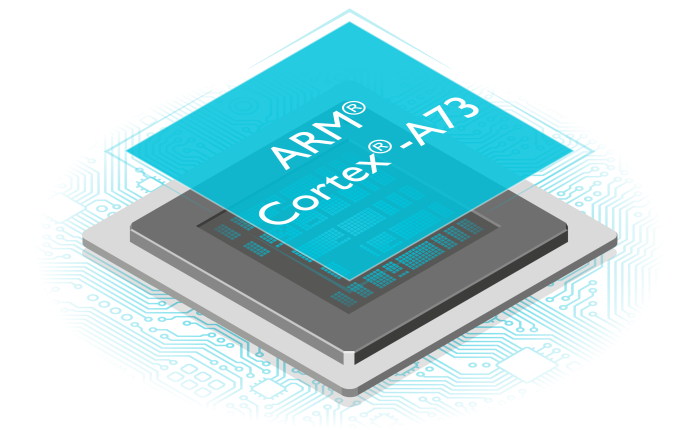 Cortex-A73 is going to succeed the powerful Cortex-A72, but it is also important to see by what margin the former going to transcend in both performance and efficiency.

Before we move on, we’d like to thank Anandtech for providing us with a ton of knowledge concerning Cortex-A73 and the performance and efficiency barriers it will cross as opposed to its predecessors. Starting off, Cortex-A73 belongs to the same Sophia family, which means that the CPU design is pretty much the same as a Cortex-A17. Now, here is a very interesting approach that ARM took with its Cortex-A73; instead of choosing to maintain A72’s 3-wide microarchitecture’s decoder width, the firm instead decided to go back to a 2-wide decoder and even then, its able to deliver higher performance and sport a lower-power design compared to Cortex-A72. 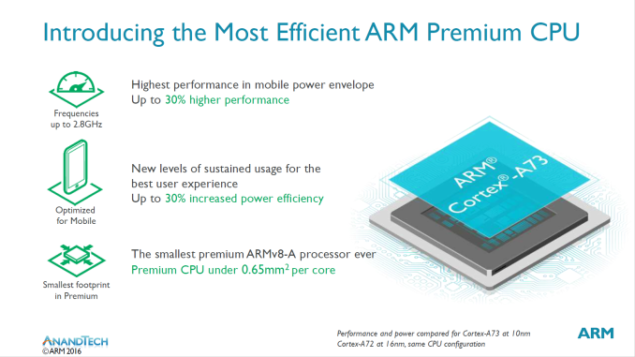 With all the buzz revolving around how far mobile processors have come towards the performance side of things but the battery side remains undeveloped, ARM has recognized that power efficiency is a top priority for today’s smartphones. Due to terrible CPU designs, power consumption has been spiked up to 5 watts and in some cases going overboard of 10 watts of power. This will obviously cause a grave concern for smartphone users, and the only way to overcome this barrier is through large battery capacities. However, using this approach, the bulk of the phone increases, and since battery technology has not seen any development past the lithium ion or polymer stages, battery degradation is imminent through constant usage. 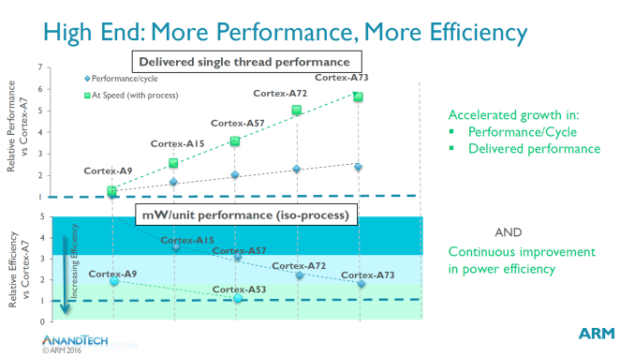 While dedicated to deliver performance (we will get to these metrics later in the article), Cortex-A73’s main focus is power efficiency and sustained peak performance. According to the tests, given below is the level of performance that Cortex-A72 is able to bring to the table: 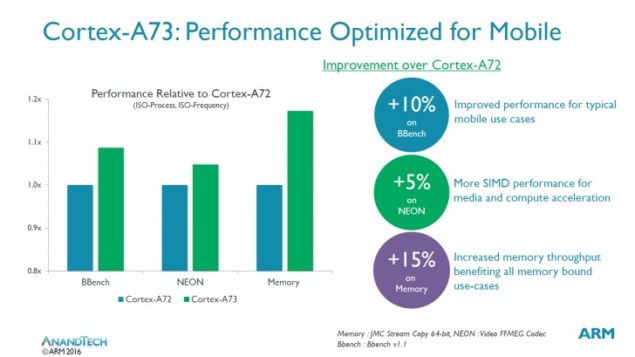 ARM has also stated that that it’s Cortex-A73 uses at least 20 percent less power than the A72 at the same process and frequency. This means that the processor’s frequency can be slightly increased in order to garner additional performance to achieve the same power consumption as Cortex-A72. Manufacturers will keeping their affordable smartphones and tablets with SoCs based on the 28nm process, which Cortex-A73 running inside them, but ARM has also hinted that 10nm SoCs will be released sporting the processor.

This low power and sustained performance combination can result in clock speeds going up to 2.8GHz under a 750mW power budget (SPEC2K workload). According to the source, 3GHz on a 10nm SoC and 2.8GHz on a 16nm FinFET SoC is achievable with Cortex-A73 running inside. However, a higher contribution will also be taken into account if physical implementation by manufacturers have been incorporated seriously into their handsets.