Cupertino tech giant Apple Inc has been reportedly in talks with Korean firm Hyundai to manufacture its rumored Apple Car. Hyundai, for its part, has considered referring Apple to Kia.

Taiwan's Hon Hai Precision Industry Co. Ltd., also known as Foxconn, has decided to operate its electrical vehicle manufacturing unit independently from the rest of the firm.  the company has been aggressively pushing into the contract manufacturing electric vehicle space as of late, as it hopes to target the growing startup industry that is looking to capitalize the increasing demand for electric vehicles.

Foxconn's Announcement Comes As Company Brings 1,200 Suppliers On Board For Electric Vehicle Production

Foxconn's announcement to spin off its electric vehicle manufacturing division as an independent unit comes as the contact manufacturer announced yesterday that i1,200 companies had agreed to work with it for electric vehicle production. Foxconn had held its global supplier event on Thursday, and in some of the firms which have agreed to work with the company include Amazon's Amazon Web Services arm, German chip supplier Infineon and China's Contemporary Amperex Technology Co. Ltd. (CATL) who is also known for supplying Tesla Inc with battery packs.

The reason behind Foxconn's decision to operate its electric vehicle manufacturing division as an independent business unit is to enable cooperation between Taiwan's different EV component makers explained the company according to Taipei Times.

AWS' support of the venture is due to Foxconn's aim of enabling its partners to design electric vehicles on the cloud.“In the future, you will be able to develop 80 percent of an EV’s functions on the cloud,” believes the company's chief technology officer Mr. William Wei.

A major hurdle for new companies looking to target the EV space is extensive investments in manufacturing facilities which often take years to set up and operate. Foxconn aims to remove this hurdle and provide potential startups and other companies a standardized platform through which they can manufacture their products. The company has already agreed to manufacture vehicles for U.S.-based Fisker Inc, through a facility rumored to be constructed in the state of Wisconsin. 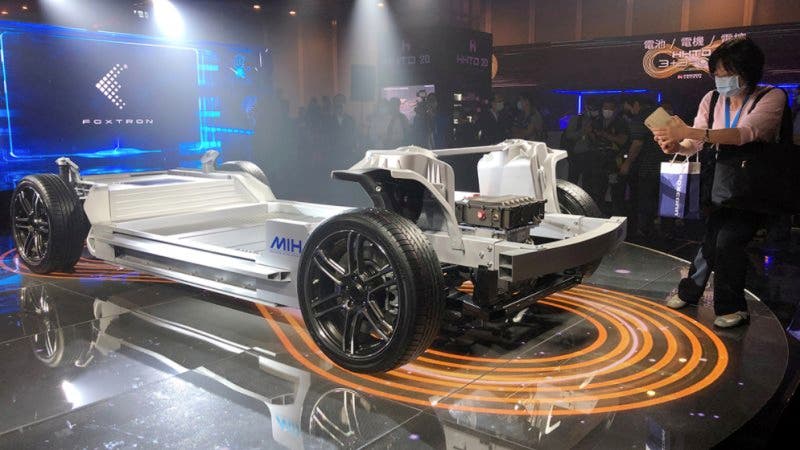 Foxconn's electric vehicle chassis that it intends to sell to its customers unveiled in 2019.

According to Taipei Times, the CTO believes that:

Foxconn's plans to expand its services to the electric vehicle sector will enable it to sit at the heart of car manufacturing should companies choose to use its facilities for production. The contract manufacturer is also busy expanding its facilities in Vietnam in the wake of heightened trade tensions between the United States and China.

However, the decision to provide its customers with an EV chassis is unlikely to woo Cupertino tech giant Apple Inc to Foxconn. Apple is known for its preferences for designing all of its products, and a chassis that is available to other companies will not sit well with the company's culture.

At the same time, the support by EV component makers should provide an incentive for Apple as it will reduce the amount of coordination that the company will require with its potential vehicle suppliers. Apple is also known to source some of its gadget components from little-known companies who can meet its exacting specifications, and should this philosophy carry over to the rumored Apple Car, then Foxconn will once again have to tailor its operations for its biggest customer.