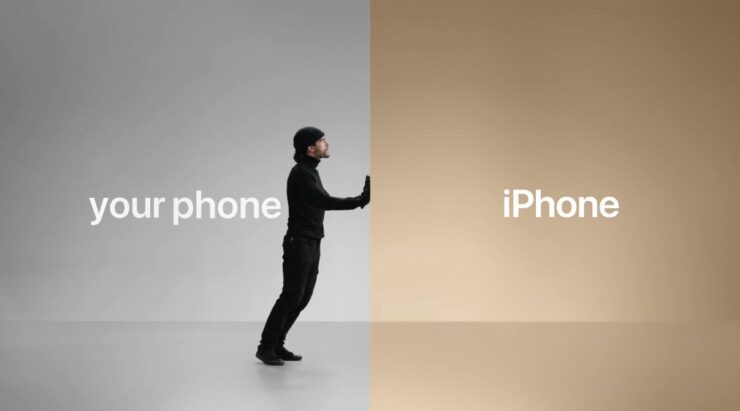 Previously, Apple released five new videos enticing Android users to switch to the iPhone. Now, the Cupertino giant has seen fit to release three new ads under its "Life is easier on iPhone" campaign. The three new ads are very similar to each other yet deliver a very different perspective. Generally, the ads show how life is easier on the iPhone. So let's dive in to see some more details on the new ads.

First of all, Apple shared the new "Contacts" ad on its YouTube channel as part of its ongoing "Switch to iPhone" campaign. The ad is 15 seconds long and showcases people jumping from "your phone" to "iPhone". The ad contains the tagline "it's that easy". In addition to this, the ad also contains a link to its new Switch website which has been recently revamped.

The next ad shared is titled "Smooth" in which the person in the "your phone" section is glitchy and lags. However, when that person reaches the "iPhone" section of the ad, it spontaneously becomes smooth, as will be the switch according to the company.

Lastly. the final ad is named as "Security" which depicts that the iPhone's platform features security updates as well as hardware and software that "just works". In the ad it can be seen that a person is trying hard yet failed to breach in the "iPhone" section. This shows the security aspect of the iPhone.

Apple's overhauled webpage promotes how easy and convenient it is for Android users to make a shift to the iPhone. All this will be possible via the company's Move to iOS app available on the Google Play Store. So if you're interested in making a switch from your Android smartphone to the iPhone, do take note that the Move to iOS is really helpful in transferring your data.

Apart from today's ads, the previous ones emphasized on transferring Photos, Music, Privacy and much more. When the company first launched its new video campaign earlier this month, it also revamped its microsite, apple.com/switch. The site provided information on how Android users can make a shift to the iPhone. So do consider the guidelines if you're interested in switching from an Android device to an iPhone.

This is it for now, folks. What are your thoughts on the new Apple ads? Share your views with us in the comments.