Apple has just released the update for it iOS operating system. The iOS 7.1.2 has been released over the air and includes several bug fixes and security updates. This includes several fixes. The email attachment security bug, improved connectivity for iBeacon and data transfer for third party devices are some features which have been affected and improved by the update. 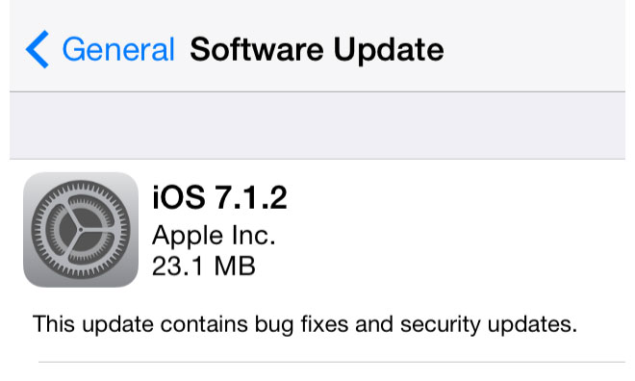 iOS 7.1.2 Includes Fixes For Email Encryption iBeacon Locksreen And Others

iOS 7.1.2 completely addresses the email attachment encryption issue which cropped up a while back. Even though a jailbreak tweak solution was available for the issue, the problem has been officially patched of now. In addition to the email encryption bug, connectivity for barcode scanners that connect to the iPad or the iPhone through iBeacon has also been improved. Data transfer for third party accessories which include barcode readers has been improved in the iOS 7.1.2. In addition, there was a lock screen vulnerability in the previous version as well. This allowed the passcode screen to be bypassed by simply giving a miss call to the device. This issue has been patched up by Apple as well in the iOS 7.1.2.

The iOS 7.1.2 can be installed either through the on-the-air update made available by Apple, or through manually installing the software through iTunes. Generally speaking, the manual update through your PC or Mac is less likely to cause problems later on. We've collected direct download links for the iOS 7.1.2 from Apple for devices supported. Be sure to pick the correct one for your device from the links given below.

Also, once you're done downloading and installing the iOS 7.1.2 for your device, you might want to jailbreak your device. A complete tutorial for the untethered jailbreaking process for your device using the Pangu tool can be found here.