Everyone's favorite touch screen phone makers, MP3 player and even desktop computer and laptop maker has turned a new cheek and have made their own site where they are selling game for a variety of platforms such as the iPod, iPod Touch, iPhone and even the iPad. So far the prices vary from Free to 99 cents, I am 99% sure that the games will use motion sensitive and touch sensor advantage to gain an advantage in the mobile handheld gaming sector (No the DS does NOT count as a MOBILE handheld, its only a handheld). 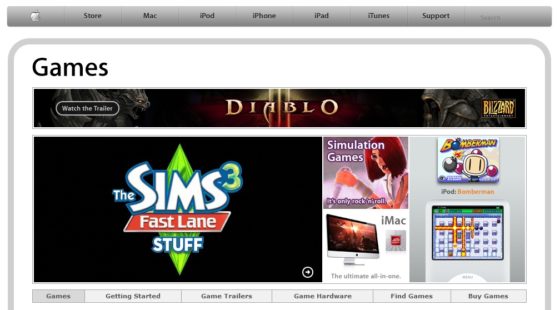 Considering that the population of Apple iProduct users (see what I did there?) is HUGE there is very little doubt that people should be blasting the site right now for a good game to put on their iPad or their new iPhone 4, according to Mobclix there are about 47,624 available right now, from mobile games all the way to games for your iMac's and MacBook Pro's. Those are quite a lot of games already considering that this is probably the sites first day. With such amazing prices and great games at disposable its clear that the era where Mac was considered the Anti gaming platform might finally be over. Steam has also ported their games to the Mac and now this site will help bring Mac's to the gaming level.

Get These Paid Apps And Games For Free From The App Store Today, Includes République, Epica 2 Pro And More