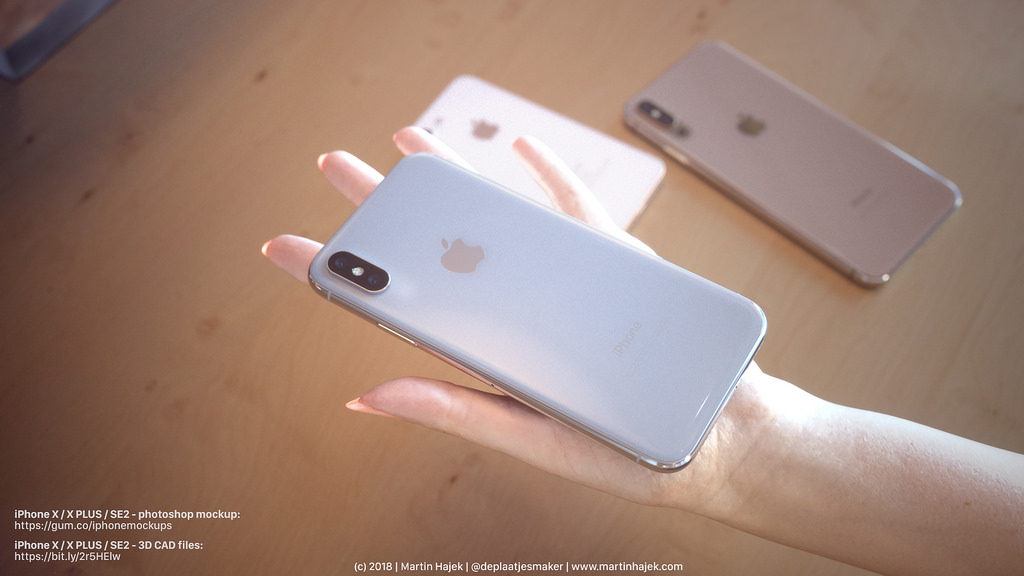 Despite a good four months left until Apple launches them, a lot of rumors are floating around for what to expect on this year's iPhone lineup. Apple did its best to keep iPhone revenues up this year by driving ASP up with the iPhone X. However, as market response demonstrates, the company needs to make sure budget-conscious users also get to enjoy Face ID.

Otherwise, Apple will see a decreasing rate of Android switchers at the very least. This, won't fall in well with Cupertino's plans to generate more income from a well-established iOS user base. Now, if you're wondering what this year's larger iPhone X Plus might look like, we've got you covered.

Concept Renders Demonstrate How The Apple iPhone X Plus Might Look With A Triple Camera Setup; Offer An Additional Lens Separate From The Primary Dual Camera Setup

Right now, the rumor mill expects Apple to take a different direction for its 2018 iPhone lineup when compared against last year. While 2017 saw Apple go all out and launch a beefed up, price heavy iPhone X, this year Cupertino will take a breather. The majority of leaks focus on a budget-friendly iPhone 9; a smartphone that will succeed last year's iPhone 8 and iPhone 8 Plus.

In addition to the iPhone XS Plus, Hajek also provides us with his take on the rumored iPhone SE 2 and the iPhone XS. However, due to the aforementioned triple camera setup, the iPhone XS Plus takes all of the attention. Instead of integrating this lens inside the iPhone's primary camera setup, Hajek chooses to place it beneath the setup. While this decision is likely based on aesthetic principles, internals should make such a move more complicated.

Talk for an iPhone with 3 cameras isn't all claim-chowder. Last month, some sketchy supply chain sources reported that Apple is looking into such a feature. According to them, the iPhone XS Plus will feature 5x optical zoom, 6P anti-shock capability, and a 12MP resolution. Should Apple really go for such a feature, which is highly unlikely, expect Android to erupt with claims of the company copying Huawei. Thoughts? Let us know what you think in the comments section below and stay tuned. We'll keep you updated on the latest.